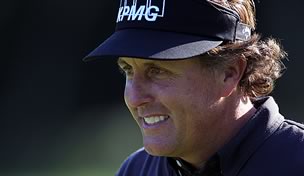 Getty Images
DORAL, FL - MARCH 14: Soren Kjeldsen of Denmark plays his third shot at the 1st hole during the third round of the World Golf Championships-CA Championship at the Doral Golf Resort & Spa on March 14, 2009 in Doral, Florida (Photo by David Cannon/Getty Images)  -

SCOTTSDALE, Ariz. – Phil Mickelson would like you to know that he isn’t done yet. Isn’t done competing, isn’t done winning and isn’t done being motivated for both.

Despite what the rumors may claim.

In today’s need-it-now, 140-character, McNugget-eating, McMansion-building, mile-a-minute society, conclusions often come quicker than facts. No point in waiting on a result when an opinion can be formed in the time it takes to microwave dinner.

Golf is hardly immune to such knee-jerk reactions. Exhibit A: Tiger Woods. In the past two years, he’s been both “BACK!” and “DONE!” not with every tournament or even every round, but in so many cases, on a shot-by-shot basis.

In an ironic twist of events, Mickelson can feel his pain.

One round through his season-opening appearance at the Humana Challenge, the mercurial left hander had saddled himself with a 2-over 74 that included two bogeys, a double and a triple. Suddenly his inspiration was being questioned. With his World Golf Hall of Fame induction coming this May and with 39 career PGA Tour victories and four major championships already to his credit, it could be surmised that Mickelson is not only done playing his best golf but is done wanting to play his best golf.

He followed with scores of 69-66-69 the next three rounds and though he didn’t contend, he easily made the three-round cut.

Fast forward a few days and again Mickelson’s motivation was again being examined after an opening-round 77 at Torrey Pines’ South Course that led to a missed cut at an event he has won three previous times.

His explanation? “I don't know what happened last week,” he said. “I'm going to put it as something I'm going to shrug off because I know that my practice sessions have been really good.”

Mickelson maintained that his motivation remains as high as ever.

“I love to compete. I'm excited about this year. I'm ready to play,” he said prior to competing in this week’s Waste Management Phoenix Open. “Bringing it from the practice session and bringing it out on the golf course, that's my challenge right now, because I was able to … get my putting where I want it. My putting feels terrific. I felt it was the last physical part of my game that needed some work, and it feels great. Now I've just got to get it from the practice tee to the golf course.”

Ever the optimist, Lefty said Wednesday that he’s looking at this week’s festivities – and yes, the WMPO must always be described as “festivities” – as the start to his season, and he will try to forget that those first two weeks ever happened.

It would be a daunting proposition for most other players, but such has become the norm for Mickelson, who can go from MC to W and back to MC like nobody in recent memory.

While playing successful golf may still be at the forefront of his career goals, there’s no question Mickelson has growing interests in other aspects of the game. Following last week’s event at Torrey Pines, he offered to redesign the North Course for no fee, only wanting to “fix” the layout out of the goodness of his heart.

“Well, I tried to underbid everybody. That was the goal,” he said with a laugh. “It has been a dream of mine to turn that golf course into what I know it can be. We will spend countless hours making sure that that course is right because the first goal is to make it playable. It's got to be playable for everybody.

“I'm excited about this opportunity because it's the most beautiful canvas out there, and it has not been utilized properly, and I feel like after playing for so many decades and looking at these courses and appreciating all their beauty, to try to take that and integrate it into a course that I love is a fun opportunity.”

When asked whether such pursuits as course design and other business related to the industry could affect life inside the ropes, Mickelson deferred.

“It certainly can if you let it, but that's why I have to isolate it,” he explained. “That's why this is a perfect fit. It's in San Diego when I am home. I always take a week off after I play for a few weeks, so it's a perfect opportunity for me to go spend time after I drop the kids off at school, go spend a few hours on the golf course 15 minutes away.”

Even if his playing career is far from over, it appears Mickelson is already starting to set himself up for life after tournament golf – much like so many other Hall of Famers have done before him.

Early Wednesday morning, PGA Tour commissioner Tim Finchem met with Mickelson on the practice range at TPC-Scottsdale and implored him to not think about the Champions Tour “until he’s 55 or 56 years old.” The commish may have a pie-in-the-sky outlook if he believes the player will be competing on a weekly basis for the next decade-and-a-half, but he also realizes that life after Phil will never be life devoid of Phil.

“The sky is the limit for Phil. He can do whatever he wants,” Finchem said. “I would hope that his playing career has a long way to go, but beyond that, I think he’s a smart guy, he’s so personable, he’s got a good business mind – I think he can be invaluable in a lot of different ways. He can design golf courses, he can work with the charity interface, he’s a good spokesperson. I don’t know if I’ve ever seen anyone better with sponsor customers than Phil Mickelson.”

He claims he isn’t going anywhere anytime soon. There’s no reason to extrapolate – even in our need-it-now times – two sub-par performances into a lack of motivation, desire or talent. Mickelson will have another chance to prove the doubters wrong this week. And if it doesn’t happen here, then he’s got the next week and the week after that, too.

Sure, he may be setting himself up for life after competition, but that doesn’t mean such a time is impending – and according to him, it’s certainly not here right now.