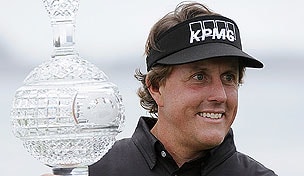 PEBBLE BEACH, Calif. – One after the other, the game’s two biggest stars ascended into one of the game’s most hallowed arenas. Their measured footsteps revealed a familiar path from the practice green, past a sculpture of Pebble Beach founder Samuel F.B. Morse and various weathered plaques, including one listing every champion of what for years was so lovingly referred to as the Crosby Clambake, but now goes by the corporate code of AT&T Pebble Beach National Pro-Am.

If either man stopped to inspect the plaque, he would have found his own name etched into the presentation. This was no time to stop. Each bounced up the 13 stairs carpeted in Masters-green Astroturf, reaching the first tee box to the hushed reverence of hundreds of spectators. It was a telling reaction from the gallery. Others may have cheered wildly or continued casual conversations amongst themselves. This one just watched collectively, waiting, hoping, knowing that it was about to be treated to a performance that would have made Morse proud.

The specter of optimism permeated the air. Hopefulness isn’t an easy commodity to pinpoint; the simplest way to describe it is that you’ll know it when you feel it. And you could readily feel it on this opening tee box.

Phil Mickelson strode in first. Head held high, famous grin faintly emerging across his face, a look of determination in his eyes. He needed to play well in this final round – no, he needed to win. To prove wrong those doubters who believed he was washed up. But more importantly, to prove it to himself. Over the first month of the season, Mickelson struggled with carrying his game over from practice to competition, later intimating, “I started to wonder if I'm going to be able to bring it to the golf course.”

Tiger Woods followed. Eyes tunneling forward, chest puffed in a display of what masqueraded as indignance, but wholly existed as focus. He needed to win, too. In a career that paralleled that of Mickelson only in chronological arc, Woods’ string of 71 career victories had been halted nearly two-and-a-half years earlier. This day would serve as his next unmitigated opportunity to correct that pattern, his latest chance to make a grandiose statement that he is indeed back – back amongst the game’s upper echelon and back within the consciousness of every other competitor.

Optimism is a funny thing. It can ebb and flow, rise and fall based on momentum. Standing on the first tee at exactly 9:29 a.m. local time on Sunday morning, there was no way to tell what each player’s optimism would wreak. There was no way to tell that almost six full hours later, on the 18th green about a 4-iron away from the Morse sculpture and the plaques and the 13 stairs and that opening tee, one player would be enveloped by it, his entire body language screaming its virtues, while the other would be utterly devoid of those positive feelings.

Without further suspense, it was Mickelson who waltzed down the final fairway with panache, that famous smile now stretched across his face. When he curled in his last birdie putt to solidify a bogey-free 8-under 64 that netted his 40th career PGA Tour title, the mercurial lefthander acknowledged the fans, hugged his caddie, kissed his wife and kept on smiling.

“It's one of the more emotional victories for me that I've had and the reason is, I've had some doubt these last couple of weeks,” Mickelson confided. “This gives me a lot of confidence and erases the doubt.”

His post-round celebration on the final green was a crescendo of the optimism that permeated the air before he started. He birdied the second hole and the fourth and the fifth, optimism giving way to comfort, comfort giving way to exuberance. By the time he eagled the par-5 sixth hole, Mickelson – and his bevy of supporters behind the ropes – was downright euphoric, building on the momentum with every footstep across the venerable coastal links.

By the time he posted a brilliant par save on the 12th, consecutive birdies on 13 and 14, and another irrepressible par save on the 15th, Mickelson was billowing with enthusiasm, armed with the knowledge that his long-awaited victory was all but assured.

Let’s not pretend that the triumph wasn’t made even sweeter by the fact that it came over his longtime nemesis. Mickelson would only allow afterward that, “He seems to bring out the best in me and the last four or five years, I've played some of my best golf playing with him and I really enjoy it.” He really enjoys beating him, too. Enjoys checking the leaderboard and seeing his name ahead, enjoys celebrating on the final green while Woods can only watch with contempt.

Yes, by that point in the proceedings, Woods’ pre-round optimism had dissolved into the mighty Pacific. He trudged off the course, brow furrowed, lips downturned to display a world-class frown. He waited for an interview with a television reporter in uneasy silence, then answered a few more questions from the awaiting throng of media members before being whisked away from the venue.

“It was a fun day to be out there,” he claimed, “but also in the end, it was very frustrating at the same time.”

From the time he made five pars to start his round to the three consecutive bogeys to conclude his front nine to the back-to-back bogeys on 14 and 15, Woods exuded that frustration. Even more telling, he appeared uncertain. He admitted later that he could never get comfortable with his swing and his putting stroke looked fiercely inconsistent, missing five putts of less than 6 feet during the round.

When the debris settled, it all added up to a 3-over 75, a whopping 11 shots worse than his playing partner and good for a share of 15th place.

Just as you’ll have to believe that optimism once reigned in the minds of both players on this day. It’s a funny thing, those ebbs and flows of hopefulness. They led to one of the most important wins of one man’s career on Sunday and dissolved during one of the most crushing losses for another.