Newsmaker of the Year: No. 2 Rory McIlroy 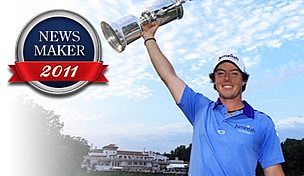 Two of the most memorable and relevant shots of the 2011 golf season were struck by the same player two months apart, utterly symbolic in their dichotomies.

The first occurred at the Masters Tournament. Final round, 10th hole. Holding a four-stroke advantage, the leader pulled his tee shot so far left that many longtime observers claimed they had never seen a ball travel to that outer part of the Augusta National course. Result: He made triple bogey and not only lost that lead, but posted a score of 80 to finish in a share of 15th place.

The second occurred at the U.S. Open. Final round, 10th hole. Holding an eight-stroke advantage, the leader delicately placed his tee shot on the par 3 about 4 feet above the hole, then spun it back to within inches, inciting raucous approval from the Congressional crowd. Result: He tapped in for birdie and easily cruised to an eight-shot victory for his first career major championship title.

The player in question, of course, is Rory McIlroy. And there’s a terrific chance that the latter never would have happened if it wasn’t preceded by the former.

After falling apart on the game’s grandest stage, the 22-year-old accepted the defeat and took it in stride. If his Sunday play wasn’t exemplary, his post-round interview certainly was.

“I just unraveled,” he explained. “Hit a bad tee shot on 10, and then never, never really recovered. You know, it's going to be hard to take for a few days, but I'll get over it. I'm fine.

“It's a Sunday at a major, what it can do. This is my first experience at it, and hopefully the next time I'm in this position I'll be able to handle it a little better. I didn't handle it particularly well today obviously, but it was a character-building day, put it that way. I'll come out stronger for it.”

It didn’t take long, either. Just two months later, at the very next major, the U.S. Open turned into the McIlroy Monument in the nation’s capital, as the precocious youngster stamped his place amongst the greats with a momentous wire-to-wire triumph that recalled memories of a young Tiger Woods.

Afterward, the Masters bounce-back wasn’t far from his mind.

“I felt like I got over the Masters pretty quickly,” he said. “I kept telling you guys that and I don't know if you believed me or not … Nice to prove some people wrong.”

This will be remembered as a year that McIlroy proved he can not only be dominant on the course, but off of it, as well. He made international headlines for breaking up with his longtime girlfriend and starting a relationship with Caroline Wozniacki, the world’s No. 1-ranked tennis player. He created news by severing ties with super-agent Chubby Chandler, electing to be represented by the group that handles good friend Graeme McDowell instead. And he ascended to No. 2 in the Official World Golf Ranking, his seemingly predestined jaunt toward the top spot still on the ascension.

More than anything, though, McIlroy’s year will be most memorable for his Masters snafu and U.S. Open supremacy. He was clearly one of the season’s biggest newsmakers – and will continue to serve in that role for a very long time.