Newsmaker of the Year: No. 7: Steve Williams 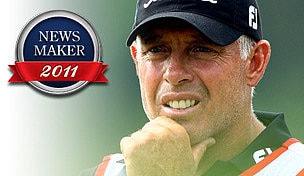 There’s an old adage born in the caddie yards that extends from neophyte bag luggers to lifelong loopers. “Show up. Keep up. Shut up.” And not necessarily in that order.

For a dozen years, Steve Williams carried the clubs of Tiger Woods while almost strictly adhering to the final part of that policy. Sure, there were moments of slippage – like the time he referred to Phil Mickelson by a choice word – but for the most part, Williams grumpily stomped through the world’s most famous fairways without so much as a whisper. Unless, of course, an impromptu shutterbug interfered with his player’s concentration.

Photo gallery: Woods and Williams through the years

That all changed when Williams was sacked by Woods in July. Within 24 hours, the caddie spoke out about being both hurt and surprised by the decision, claiming he was blindsided by the news. It wasn’t until a month later, though, that he really started breaking the cardinal rule of caddies.

After quickly finding work on the bag of Adam Scott, Williams helped his new boss to victory at the WGC-Bridgestone Invitational. As the crowds cheered and chanted more for the caddie than the player once the title was clinched, Williams was interviewed on the final green, still vindictive and bitter about being fired.

'I've caddied for 33 years – 145 wins now – and that's the best win I've ever had,' said Williams, who was alongside Woods for 13 major championships.

Instantaneously, his worldwide approval rating plummeted. Those who rooted lustily for Williams’ buoyant success quickly turned on him for taking credit in the wake of the victory – and for good reason. Never once did Williams acknowledge that it was indeed Scott who hit the shots and stroked the putts while he simply provided support and advice. If a caddie had ever before purported himself to be the biggest part of the story, it was well beyond the memories of most observers.

It takes a special type of golfer to produce a “quote heard ’round the world.” He must be equal parts successful, popular, ebullient, controversial and loquacious. Two of ’em in one year? That doesn’t happen very often – and it never happens for the guys who carry the clubs for a living.

Despite placing his foot firmly in his mouth with the aforementioned comment, Williams still found a way to continue speaking publicly. After being lambasted worldwide following the Bridgestone, he attempted to roast his former employer at an awards banquet in Shanghai three months later.

While addressing his post-tournament torrent, he tried to explain away his feelings at the time by claiming, 'It was my aim to shove it up that black -------.”

Simply using a derogatory comment in regard to Woods would have been cause for global headlines, but Williams turned this into a much larger news story by hurling a racially charged epithet toward his former employer, who wasn’t present at the banquet.

It was enough to put Williams in hot water within the public eye for a second time in the second half of the golf season.

There are very few who would argue in favor of his comments – but even fewer who would debate that his inability to adhere to the first rule of the caddie yards established Steve Williams as one of the top newsmakers this year.