Not Your Average Bear 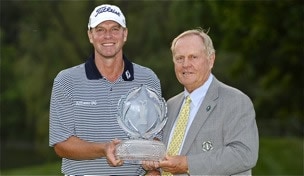 Getty Images
SILVIS, IL - JULY 11: Tim Petrovic of the USA plays a shot from the fairway during the continuation of the second round of the John Deere Classic at TPC Deere Run held on July 11, 2009 in Silvis, Illinois. (Photo by Michael Cohen/Getty Images)  -

DUBLIN, Ohio – Steve Stricker is a proven winner, with six PGA Tour wins since the beginning of the 2009 season, including a triumph at the Memorial Tournament this week.

He’s the No. 4-ranked golfer in the world and the top-ranked American player, higher than any of the single-named studs.

He’s an exciting player – despite his reputation – as evidenced by multiple eagles, a bevy of birdies and more par saves than the average 'Bear' at Muirfield Village.

He’s emotional, never failing to shed a few tears after his victories.

All of which leads to one burning question: Why isn’t Steve Stricker a bigger superstar?

Don’t mistake that query as an insinuation that he lacks talent. In fact, it’s quite the opposite. He is such an elite-level player that it’s a quandary as to why he doesn’t own a larger Q-rating.

The truth is, all of those aforementioned reasons why Stricker isn’t the prototypical superstar are really what should propel him to such status. Nobody dislikes him, from fellow players to fans. Nobody roots against him. Nobody isn’t happy for the guy when he prevails over the field.

And yet, it still has the feel of David overcoming a group of Goliaths every time Stricker wins a title.

Shouldn’t everything that makes him a fan favorite also qualify him as not only one of the biggest names in the game, but the type of guy who can’t even go out in public without getting mobbed? Different people have different takes on why this hasn’t happened – and probably never will.

Just ask his caddie, who spends time with him away from the golf course and rarely sees their plans interrupted.

“He looks a little different at night, off the golf course, when he has his hat off,” Jimmy Johnson explained. “Let’s just say he’s a little thin on top.”

Just ask his fellow competitors, who maintain they have nothing but the utmost respect for the guy they call “Stricks.”

“Maybe it has to do with the media coverage,” said Matt Kuchar, who finished in a share of second place this week. “I just don’t know if steady players are that exciting. I mean, Tom Kite probably wasn’t the most exciting player in the world, but what he did worked, just like Steve. I would imagine Steve likes it just the way it is, too.”

“Steve is kind of a humble guy. He's a Midwest guy. That's his personality,” said Brandt Jobe, who shared runner-up honors with Kuchar. “He's one of the few guys that's won a lot of times that still sheds a tear when he wins. I think Steve is Steve. He's very down-to-earth and I don't think he draws attention to himself. Not that it's negative or positive, but I think he kind of enjoys the way things are and he's playing great.”

Then there’s tournament host Jack Nicklaus, who believes Stricker really is a superstar, even if it’s for different reasons than other players.

Maybe superstars can simply be superstars because they’re among the best in the world at what they do. Because they’re genuine and unassuming and thoughtful. Because success means more to them than the flashier guys and they never take it for granted.

Maybe Stricker is the new breed of superstar. The kind who doesn’t pound his chest or sport any bling. The kind who appreciates the fan support and isn’t considered a villain by any of ‘em.

Most of all, maybe Stricker is a superstar for one major reason: He doesn’t think he is.

“No, I don't,” he said. “I've been up to No. 2 in the world, and I just go about my own business. I don't look at myself any differently.  I just go out and play, you know, and I try to play well. And I'm on a great run these last five or six years and I just want to continue it.”

All of it makes Steve Stricker is one of the game’s biggest superstars after all. Whether he likes it or not.