The Open is wide open 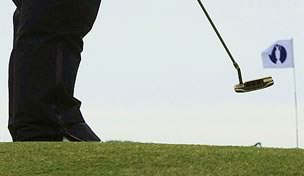 SANDWICH, England – Stop me if you’ve heard this one before: Anyone can win this week’s tournament.

On second thought, don’t stop me.

Yeah, I know. It’s the same refrain prior to every event – and especially before the majors. It’s wide open. Anybody’s ballgame. There’s no telling who might win.

Not that we were lying on those other occasions, but this time we really mean it. Seriously. The Open Championship is more open than any other recent championship.

Don’t believe the hype? Let me count the ways…

This may sound a bit disingenuous coming off a week in which the top-ranked player in the field won on both the PGA and European tours, but we are firmly ensconced in the Age of Parity.

Three players have won multiple PGA Tour events so far this season, none more than twice. Only two have won more than once on the Euro Tour – and each of them (Luke Donald and Charl Schwartzel) own a victory in the United States at a co-sanctioned event.

“Well, I think when you look at the field, you're going to see there's probably 130 guys that could win this week, [that] have a legitimate chance,” said Ben Curtis, who won here at Royal St. George’s in 2003, the last time this tourney was contested here. “You're going to take here and there 20 that may not be feeling well or their game is really bad or whatever coming in, but pretty much anyone in the field can win this week. It's just a matter of having the right things go your way and making a few putts.”

Hey, he should know. Speaking of which…

This course has held a dozen previous editions of the Open, yielding some of the tournament’s greatest champions.

And then there was Curtis. Nothing against the 2003 winner, but as a PGA Tour rookie with no prior top-10s to his name and the 396th-ranked player in the world, he was one of the biggest major surprises ever, becoming the first man to win his initial major start since Francis Ouimet in 1913.

Horses for courses, right? Well, this one has proven that quirky, uneven fairways, imaginative bunkering and, as five-time champion Tom Watson proffered, “the most complicated greens and the most severe greens that we play in Open golf,” tend to level the playing field.

Luck of the draw

Lucas Glover owns a major championship. There’s nothing that should or could diminish that accomplishment.

Then again, had the USGA randomly decided to place him in the early-late wave of the 2009 U.S. Open – originally playing Thursday morning and Friday afternoon – he may not own such hardware. As you’ll recall, torrential rains during the early part of the first round at Bethpage left the morning wave struggling to post decent scores, as a large majority of those who made the cut came from the late-early draw, like Glover, who parlayed good fortune into a great result at week’s end.

That’s just one example. It’s hardly a unique circumstance, either, as weather conditions often play a large part in scoring – and at the Open, such conditions can change considerably during the course of the day.

And that’s exactly what the whispers are about beforehand. According to early forecasts, the windiest conditions will come early Thursday and late Friday, meaning a tougher draw for favorites such as Rory McIlroy, Luke Donald and Sergio Garcia, while an easier road may be paved for the likes of Lee Westwood, Martin Kaymer and Phil Mickelson.

“The draw is a huge part of the Open,” concurred 1999 winner Paul Lawrie. “You hopefully get the luck of the draw and get the better part of the weather.”

What is the most important aspect of a player’s game this week? According to Watson, it’s the long game.

“You have to drive it well,” he said. “There’s a premium on approach shots on this golf course – the weighted shot, getting the shot the right distances, is going to be a very difficult thing to do. … Hitting the ball the right way is very critical. It’s typical of a links golf course.”

Not to disrespect Old Tom, but many other players polled have contended that this tournament will turn into a short game contest, with the sharpest flatstick determining the overall champion.

Then again, perhaps it’s less technical than mental, as the way a player deals with adversity could lead to his ultimate result.

“At the end of the day, we’re all going to play 72 holes and everyone is going to have a few bad bounces,” said Robert Karlsson, who has finished 14th or better in each of the past two years. “It’s more about how you react to it and handle it.”

So there you have it, golf fans. This week’s winner will need to drive it well, own a precise iron game, hole plenty of putts, have the right mental fortitude, overcome 155 worthy challengers, and – yes – get a little lucky, too.

Hey, it’s like I said earlier. This Open is wide open.