Pebble Beach gets serious on Saturday 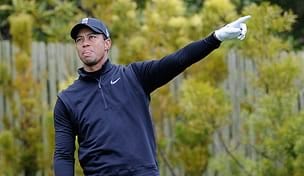 PEBBLE BEACH, Calif. – A funny thing happened at one of the world’s most scenic golf courses on Saturday.

You know, things like that. The usual frivolities that annually permeate this PGA Tour stop.

This day has always been about fun and games, about watching hacking actors and chopping comics steal the spotlight from the pay-for-play guys, about the tournament taking a backseat to the sideshow.

This was the year Saturday got serious.

No offense to Charlie Wi, who leads this tournament by three strokes, nor his next closest competitor Ken Duke, but the explanation for this can be found with the big boys.

Tiger Woods posted a third-round 5-under 67 at Pebble Beach and Phil Mickelson claimed a 2-under 70 on the same course to take the focus away from the antics.

During a cold, damp day on the Monterey Peninsula, the game’s two biggest drawing cards over the past decade-and-a-half proved their staying power not only over their peers, but the gaggle of entertainers and athletes who traditionally hold court at these festivities.

Hey, it makes perfect sense. This has always been a tournament for the stars and those of Woods and Mickelson shine brighter than any of the Hollywood heroes who are playing this week.

And so for once, there was more attention being paid to the guys on the leaderboard than those who find themselves plastered on billboards.

For Woods and Mickelson, even though each was competing with an amateur partner – and both of their teams made the cut – it was business as usual at Pebble Beach, especially the part about climbing the leaderboard.

With galleries burgeoning to nearly as large as those of Woods on Saturday, Mickelson also claimed that it was an enjoyable round on the links while remaining in contention.

“It was a fun day to play golf out here,” he said. “The course is in such great shape. To play with weather that was constantly changing was a fun challenge.”

Ironically, the two players who may have had the most fun in the third round weren’t even at Pebble Beach to witness the festivities.

Wi posted a 3-under 69 at Spyglass Hill, while Duke carded a 5-under 65 at Monterey Peninsula Country Club, each with more of a, let’s just say, comfortable atmosphere at the other courses in this week’s rotation.

“I had a lot of Cal friends out there and my parents drove up today,” Wi said. “It was nice to see them.”

“I had four or five people out there, not 15,000 or something,” Duke lamented. “I just got my trainer here and my manager is here and a couple friends and it's good.”

Those two will find themselves in the unenviable position of not only trying to hold off Woods and Mickelson on Sunday, but playing in the pairing behind them. Once again, the focus will be on the PGA Tour pros instead of the amateurs, but some pros will garner a little more attention than others.

It all adds up to more buzz than usual on this famous piece of property adjacent to the mighty Pacific. The usual Saturday fun dissolved into one of purpose for some major stars and leads to a Sunday that should be all business yet again.