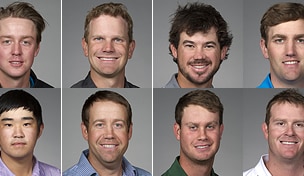 In the late-1990s and early-2000s, Jonathan Kaye was a good PGA Tour player with a bad boy image, a guy with two career wins and possibly just as many suspensions for insubordination.

His greatest contribution to the game, though, may have been his annual media guide musings, which were downright revolutionary in their absurdity.

Among his special interests, Kaye listed “jalapeno farming” and being an “avid indoorsman.” In a book overcome with answers such as “sports, hunting, fishing and cars,” these brief spurts of creativity were always welcomed with a double-take and a hearty giggle.

This year’s crop of newcomers may not be Kaye incarnates, but when their bios were recently published, there was plenty of color amongst the vast sea of vanilla.

Like that of Q-School grad Charlie Beljan. His bucket list includes being strapped to the wing of a bi-plane. Perhaps not coincidentally, he says that if there was a TV show about him “producers would have to create a death-wish channel for me.”

Maybe he should start hanging out with fellow rookie Edward Loar, whose own adventurous wish includes driving on the Autobahn. If that’s not a plea for an exemption into the BMW International Open, nothing is.

Erik Compton never travels without his blanket. Some of those travels include trips to Norway, as he owns dual citizenship between that country – where his mother was born – and the United States.

Jason Kokrak was born in Canada while his mother was visiting her homeland, but moved to Ohio a week later. It wasn’t until age 14 when he attempted to travel abroad for a tournament that he realized he wasn’t a U.S. citizen. Kokrak was obligated to take a citizenship test, which he passed.

So many players list legends of the game within their dream foursomes. Bud Cauley is no different. He would like to tee it up with Jack Nicklaus. Rounding out the foursome? Stunning starlets Carrie Underwood and Megan Fox. Sounds like one hell of a dream.

When asked about his son’s decision, Bill Cauley took issue with one of the choices. 'I just don't know why Jack,” he said. “Why not Mila Kunis? She's smokin' hot.'

Sounds like a pretty tantalizing fantasy. That’s something for which Brendon Todd can root. His favorite athletes include whomever is on his fantasy football team.

John Huh’s favorite music group is Girl Generation. They are a nine-person Korean girl band, known for such hits as “Gee” and “Tell Me Your Wish (Genie).” Just a guess, but if he brings ‘em up to his playing partners this year, the prevailing response will likely be… Huh?

Hey, players have to look good these days. They’ve got to match the hat to the shirt to the belt to the pants to the shoes. But this is a new one: Gary Christian (pictured above) wears light blue in the final round to match his eyes for photos.

Even some of the less edgy responses are still intriguing. Mark Anderson keeps chicken tenders in his bag as a snack. Tommy Biershenk worked as a DJ in college. Scott Brown never travels without shoe cleaner.

That wasn’t a politically correct answer, but Billy Hurley III provided one when asked about his favorite food. The answer: His wife’s cooking. What a suck-up.

At least it was a creative response. This year’s rookies were chock full of ‘em, but one answer stood out above all others.

He’ll have an opportunity to do plenty of things this season that he’s never done before. All of which means that next year’s media guide entry could look very different. His new biggest thrill could very well be things he’s already done.