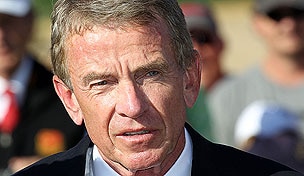 WHITE SULPHUR SPRINGS, W. Va. – When the USGA and R&A first proposed an anchoring ban and asked other influencers within the game for an assessment during a lengthy comment period, the PGA Tour was amongst the most vocal, opposing the notion with passionate dissension.

On Monday, that very same PGA Tour announced that it plans to adopt the anchoring ban, which has gone from nominated proposal to Rule 14-1b, starting Jan. 1, 2016, in effect agreeing to a rule that it had previously opposed.

If this 180-degree reversal sounds like the ultimate contradiction, it should. After all, we’re just months removed from PGA Tour commissioner Tim Finchem publicly denouncing the idea in multiple forums. Now he’s prepared to embrace it.

So what happened? Why did the PGA Tour flip the script on this plotline? How did its policy board so quickly change its collective mind on this issue?

Well, the truth is, it didn’t.

But to understand why and how, we need to look back to the 1960 presidential election.

That year’s emotionally charged campaign race pitted John F. Kennedy, a charismatic senator from Massachusetts, against incumbent vice president Richard M. Nixon in an election that garnered increased interest thanks in part to the first-ever televised debates. Among those captivated by the proceedings was a 13-year-old boy in Virginia named Timothy Finchem, who would later credit that presidential race with first getting him intrigued by politics.

His hobby soon became his passion, the political process consuming his formative years. Finchem would study political science at the University of Richmond, then get into the political arena even more during law school. He later ran a senate campaign in Virginia, which led to a job as deputy advisor to the office of economic affairs for the Jimmy Carter administration, coordinating economic initiatives within the White House.

Eventually, Finchem would leave politics to start practicing law. Even after becoming PGA Tour commissioner in 1994, though, he always relied on that political background to help navigate his way through potentially chaotic situations.

Timeline: A history of the long putter

Official statement from the PGA Tour on anchor ban

Therein lies the connection between that long ago presidential election and the impending anchoring ban.

As with many issues that have arisen during his tenure, Finchem has viewed this one with the agenda of a politician. That notion may come saddled with a negative connotation, but it doesn’t need be.

The feeling inside PGA Tour circles is that the organization was always going to adopt the anchoring ban. Rather than simply state that from the beginning, though, Finchem looked at the ramifications of such an announcement with an eye toward his constituency.

Since the commissioner in effect works for – and certainly with – the membership, outwardly lauding the initial proposal would have garnered a backlash from the admittedly small minority of anchorers who felt that Finchem didn’t have their best interests at heart.

It may have been posturing, but initially opposing the proposal was Finchem’s way of saying to the likes of Webb Simpson, Keegan Bradley and Adam Scott, “I’ve got your back on this one.” Rather than hang certain members of his organization out to dry, the commissioner publicly voiced his support for their cause.

Now that the policy board has approved Rule 14-1b, any potential backlash from the anchoring group is pacified due to Finchem’s original stance. None can maintain he didn’t support them because the truth is – at least publicly – he did.

If that sounds like a shrewd political move, it doesn’t end there.

Finchem counts himself among the many titans of the golf industry who believe that bifurcation – a separate set of rules for professionals and amateurs – has no place in the game. These traditionalists will contend that one of the many beauties of the game is that a Sunday morning foursome at the local muni plays to the exact same set of rules as the likes of Tiger Woods and Phil Mickelson in a professional competition. It’s a common bond that is uncommon in so many other sports.

By reversing its stance on the anchoring ban – or at least acquiescing to the ruling of the USGA and R&A – the PGA Tour is in effect flinching first in this substantial game of chicken. But again, it’s a politically charged strategy. With this announcement, Finchem will contend the policy board’s decision was due largely in part to not wanting to create bifurcation.

It’s a strategy that in many circles will leave the commissioner as a heroic figure for his ability to accept the ban so as to not initiate two separate sets of rules within the game.

Whether these politically charged practices are seen as craftily ingenious or deviously underhanded depends solely on the observer. The reality is, they’re probably a little of both, with the PGA Tour protecting its honor and protecting its players, but ultimately getting its way in the matter. Some would contend they’re having their cake and eating it, too.

What can’t be argued is that there was indeed a political agenda at play here. Finchem is well versed in the strategies involved in such issues. He’s implemented them in the past with similar success and this matter was no different, as he planned three, four, five steps ahead at every checkpoint throughout the process.

It may not explain everything about this decision, but it does serve to explain how an organization that outwardly opposed an anchoring ban just a few months ago is voting in support of it this week.