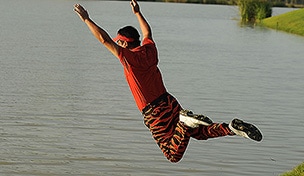 Getty Images
KIAWAH ISLAND, SC - AUGUST 08: Davis Love III of the United States hits a tee shot during a practice round of the 94th PGA Championship at the Ocean Course on August 8, 2012 in Kiawah Island, South Carolina. (Photo by Sam Greenwood/Getty Images)  -

For years, I’ve been writing my column on players who will make “The Leap” – and for years, it’s been posted on New Year’s Day, as much a tradition as the Rose Bowl and black-eyed peas. (OK, maybe less. Slightly.) As you may have noticed, though, today is not New Year’s Day. But it does represent a new year for the PGA Tour.

Two weeks, three days, 17 hours and some 12 minutes after the last putt of the 2013 season dropped comes the first tee shot of the 2013-14 season, part of a new wraparound schedule that quite literally ensures professional golf never stops.

So although the ink is hardly dry on stories about the United States’ Presidents Cup win and Henrik Stenson’s FedEx Cup crown, it’s already time to start talking about the upcoming campaign – whether we like it or not.

Last year’s edition of this column had its usual hits and misses. Graham DeLaet did indeed qualify for the Presidents Cup team and Kevin Streelman won his first PGA Tour event. Others weren’t so fortunate. Instead of reaching the world’s top-10, Bo Van Pelt suffered his worst year in a decade; rather than reach the Tour Championship, Seung-Yul Noh found himself back in the Web.com Finals.

But hey, it’s a new year – er, a new season. Time to make 10 more predictions about which players will make “The Leap.” And I’ve gotta hurry. I think the Rose Bowl is coming on soon. Throughout my online chats during last week’s Presidents Cup, I was peppered with comments from fans who believed Day would be the next first-time major champion. I agreed – but with a caveat. I still think the 2010 Byron Nelson Championship winner needs another victory under his belt before he claims that elusive major. Each could happen this year, as the ultra-talented 26-year-old is following in the footsteps of buddy Adam Scott and setting his schedule to best prepare for the biggest events. He’s also proven he can contend with four career top-three major finishes – two apiece at the Masters and U.S. Open. The sign of a truly elite player is the ability to win any week on any course. Day has that ability. This coming year it will come to fruition. While he was bitterly disappointed and frustrated after missing a 72nd hole birdie putt to force a playoff at The Barclays, the result did have a nice residual effect. It got Woodland into each of next year's first three majors, which has been a battle of late. After dealing with injuries, he missed three of the four this past year. In 11 career major championship starts, he's never pulled a top-10, his best finish being a T-12 at the 2011 PGA Championship. That will change in 2014. He may not win one, but he will contend in at least one of ‘em. It wasn't so long ago that an American player could win a PGA Tour event and basically clinch a roster spot. What a difference eight years makes. There will be some heavy hitters who miss out on Gleneagles, as evidenced by the likes of Bubba Watson, Dustin Johnson and Jim Furyk failing to qualify for the Presidents Cup, but Horschel would be a strong addition for multiple reasons. He's not only a terrific ballstriker, his intensity would make the excitable Keegan Bradley look uninterested by comparison.

In the years before the likes of Rory McIlroy, Rickie Fowler, Matteo Manassero and Jordan Spieth were each hailed as the 'Future of Golf,” this Englishman was a major part of the story. Wood finished T-5 as a 20-year-old amateur at the 2008 Open Championship, then T-3 one year later as a pro. Now 25 and coming off his first European Tour victory in Qatar last year, he could be the next fresh face to earn a spot amongst Europe’s talented roster of Ryder Cup stars. With many of the top candidates splitting time between the PGA and European circuits, Wood has a terrific chance to vault up the points list by remaining (mostly) on one tour throughout the next 50 weeks.

On the heels of correctly predicting him for the Presidents Cup team in the last edition of The Leap, I'm going to keep driving the DeLaet bandwagon. It's almost too easy to declare that the world’s 32nd-ranked player will win a tournament, so let's go one better: He'll win two. If late-2013 was his breakthrough, then 2014 will be the year DeLaet proves himself as one of the game's elite players.

Four rounds in the 60s helped Matt Jones finish T-2 at The Greenbrier Classic this past season – his first career top-three result. It was one of five results in his last 10 starts of the year in which the Aussie finished eighth or better, leading to a career-best final position of 48th on the money list after entering the year with conditional status. Most players need to knock on the door a few times before finding a way into the winner’s circle, and that process is likely happening for Jones right now.

The Leap: Top 50 on the Official World Golf Ranking

Currently at 69th on the list, this wouldn’t be the greatest predicted jump, but it could be amongst the most crucial. Moving into the top-50 would help the full-time European Tour member gain entry into more majors and WGC events, which in turn could – and should – lead to claiming his PGA Tour card for the first time. With no direct route from Q-School to PGA Tour any longer, Uihlein’s story would serve as inspiration for the increasing influx of young players who are trying to find an indirect route to the big leagues.

The Leap: Top 50 on the PGA Tour money list

What a weird year it was for Peterson in 2013. Based on his T-4 finish at last year’s U.S. Open, he got into major fields at Augusta National and Merion, but failed to finish amongst the top-25 on the Web.com Tour. He easily made up for it during the four-event Finals, though, posting four consecutive top-five finishes to lead that late-season money list and claim his PGA Tour card. After so much time already in the spotlight during his young career, expect the former NCAA champion to thrive on the next level.

Consistency, thy name is Summerhays. In each of the last two seasons, the 29-year-old has posted identical statistical records of 26 starts, 15 made cuts, six top-25s and four top-10s. That’s certainly not bad, but in his fourth full PGA Tour season, expect even more. A well-rounded player whose numbers prove he does nothing spectacularly well nor poorly, his leap could consist of a first career win or inclusion in some WGCs. But let’s go with a Tour Championship berth, based on finishes of 28th or better in each of the first three FedEx Cup playoff events this past season.

As a general rule, I like looking at the PGA Tour’s all-around ranking as a definitive measure of skill level, because, well, it measures skill across the board. The first six on the final 2013 list prove that theory: Tiger Woods, Steve Stricker, Jordan Spieth, Keegan Bradley, Henrik Stenson and Justin Rose. Who was seventh? None other than Stadler, who despite owning tons of talent has never finished above 54th on the money list. Expect an improvement this year, as he’s working on borrowed time. No, the son of the Walrus isn’t that old at 33, but this longtime anchorer knows he’ll have to switch to a short stick soon enough.