Presidents Cup not must-win for Internationals 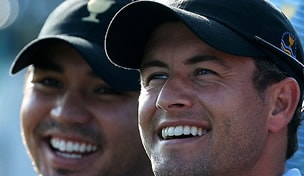 DUBLIN, Ohio – Adam Scott has a few things going in his favor. Owns the prettiest golf swing in the world. Has a green jacket hanging in his closet. Makes women swoon at the mere mention of his name.

Yeah, life isn’t terrible for the chiseled Aussie straight out of Central Casting for a world-class golfer.

Which is why I don’t feel so bad saying this: He’s dead wrong in his assessment of the Presidents Cup.

Prior to playing in his sixth edition of the biennial event this week, Scott considered the International team’s 1-7-1 all-time record and the fact that it hasn’t won since the Clinton Administration, and proffered the following comment:

'The Internationals need to step up and win the thing and make it a real competition,' he said. 'I think it's crucial. We have to win this year. The Cup loses any credibility whatsoever if we don't start winning soon.”

No offense to the reigning Masters champ, but that’s not really how it works. A competition doesn’t gain or lose credibility based solely on its winner. If Scott himself prevails at Augusta National every year for the next half-decade, the tournament won’t lose credibility. He’ll just gain tons of it.

Not to compare the Presidents Cup to the Masters, but the logic remains the same. The fact that the United States has been so dominant every other year should only serve to bolster the team’s value rather than rob the competition of credibility.

But don’t take my word for it. Listen to a couple of guys who have played in a few of these things.

“It's not that important,” said Phil Mickelson on whether the International team needs to win. “Actually, the tournament is about promoting the game of golf on an international level. Who loses and by how much isn't as important as having the guys get together in a competitive, friendly environment, put on a good show or display of golf and have some fun doing it.”

“We're playing against them,” Tiger Woods added. “We like the way it's gone, and we'd like to keep it going that way.”

Therein lies the answer to Scott’s predicament. His assertion that the event could fade into obscurity is the same two-word response given to every professional golfer who has ever groused about any predicament.

Not that Scott – nor anyone else in Camp International – is suggesting otherwise. Nobody is hinting that the U.S. team should take a knee at the 5-yard-line instead of going for the end zone.

To claim, though, that this year’s Presidents Cup – not the one played two years ago nor the one that will be played two years from now – will serve as the tipping point when it comes to credibility is awfully nearsighted.

The fact is, whether the United States wins in dominant fashion once again or the Internationals finally produce a successful encore to 1998, the event will still be played and will still garner similar interest.

What we can all agree upon, of course, is that a closely contested match is more beneficial to all parties than another blowout.

Wise words from a wise man.

It doesn’t matter if it’s the Super Bowl or Game 7 of the NBA Finals or the Presidents Cup. A down-to-the-wire nail-biter will do more for the future of any of those competitions than a one-sided vanquishing.

Maybe that will finally happen at Muirfield Village this week. This event doesn’t “need” it in order to retain self-sustenance for another two years, but it sure wouldn’t hurt.