Redemption for Stanley at Phoenix Open 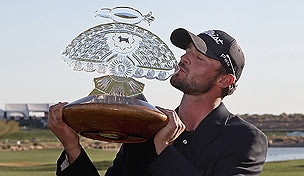 Getty Images
PACIFIC PALISADES, CA - FEBRUARY 19: Luke Donald of England watches his approach shot on the nineth hole during the first round of the Northern Trust Open at the Riviera Country Club February 19, 2009 in Pacific Palisades, California. (Photo by Stuart Franklin/Getty Images)  -

SCOTTSDALE, Ariz. – Kyle Stanley stood just outside the scoring trailer at the Waste Management Phoenix Open, the late Sunday afternoon sun beaming down on a smile that wouldn’t go away. Spencer Levin trudged past him, head down, looking mentally bruised and battered from a five-hour death march through the desert.

If there’s one person who could relate to what was going through his mind at that very moment, it was Stanley. One week earlier, he was in the same situation, losing a hefty lead at Torrey Pines in dramatic fashion. This time, in an ironic twist, it was Stanley reaping the benefits of another player faltering down the stretch.

“I really feel for him, experiencing that,” he said. “You don’t want to wish that upon anybody.”

This is a story about redemption and perdition. About perseverance and despondence. About what happens when one golfer makes the ultimate comeback at the expense of another.

Last Sunday, Stanley stepped to the final tee box at the Farmers Insurance Open with a three-stroke lead, only to post triple-bogey and later lose his bid at a first career title in a playoff. Afterward, he was understandably crushed. It sounded like simple lip service when he claimed, “I know I'll be back. I'm not worried about that. … I just need to be patient.”

He needed be patient for only seven days. Stanley entered the final round eight strokes behind leader Levin, who was six shots clear of his next closest competitor. It had all the makings of a runaway victory – except that in this newfangled world of upside-down golf, we’ve learned that playing with a lead apparently isn’t conducive to winning tournaments.

Much like Stanley one week earlier, Levin learned his lesson the hard way. On a day when the overall scoring average was more than a half-stroke under par, he posted a 4-over 75 – the worst final-round score of any player who finished in the top 60 on the leaderboard.

The recipient of such unintended goodwill was Stanley, who shot a bogey-free 65 to rebound in expressive style and erase the memories of last week’s collapse – for everybody but himself, at least.

“You know, I'm never going to forget that,” he explained. “But I think it makes this one a lot sweeter, just being able to bounce back.”

Stanley’s one-week comeback was eerily reminiscent of what David Toms accomplished last year. In contention at The Players Championship throughout the weekend, Toms missed a three-foot putt on the first playoff hole to lose, only to triumph at Colonial seven days later.

He was impressed by Stanley’s ability to pull off a similar feat.

“It’s hard, those emotions,” Toms said. “It happens so fast. … Looking back on what I went through, having a chance to win for hours and hours, then it’s gone in no time at all. But I think it’s important to get right back in it. When you’re playing well – or well enough to lead a golf tournament for that long – I think it helps to come back and play right away.”

That was Stanley’s modus operandi this week. After a brief grieving period, he mentally dusted himself off and made his first visit to TPC Scottsdale with a quick detour on the way. Prior to the opening round, he played a round at Whisper Rock Golf Club, home to many PGA Tour stars and one in particular who knows a little something about picking himself up after heartbreak. It was there that the 24-year-old received advice and support from Phil Mickelson, buoying his attitude before his next competitive round.

It’s now Stanley’s turn to dispense the words of wisdom, having lived Levin’s experience so recently, though he could only muster promises of better days when confronted with what he’d say to the latest victim of circumstance.

“He's a very good player, way too good of a player to not bounce back or recover,” Stanley maintained. “I feel bad for him. I really do.”

For his part, Levin's disappointment echoed that of Stanley from a week earlier. He forged equal parts heartbreak for what was lost and hopefulness for what may be.

“I've just got to find a way to maybe just tell myself it is a big deal because that's what we all strive for, but in the grand scheme of things it's really not,” Levin said. “My family still loves me, my friends are still my friends, I'm still going to eat dinner tonight. I guess I've just got to go with that mindset next time I'm in that situation, because I did not think like that today at all.”

The parallels between the downfalls of Levin and Stanley in the past two weeks come easy and plentiful – all of which should come as sign of good things for the former, who will tee it up this coming week at Pebble Beach.

If the two of ‘em – and the rest of us – learned anything from these situations, it’s that nothing is ever guaranteed in this game. One week ago, with Stanley about to clinch his first career victory, the oversized winner’s check was already written out in his name. In Scottsdale, that check remained blank until the outcome was clearly determined.

Kyle Stanley was more than happy to see his name written on it this time.