Reed not afraid to say what he believes 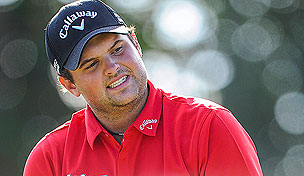 Getty Images
“It’s all part of the plan. Our record together is fantastic and we’re on a mission.” &ndash; on bringing Steve Williams back to caddie at the Masters  -

DORAL, Fla. – There was some poetic symmetry at Trump National Doral this week, where the resort’s eponymous owner claimed Ernie Els called his revamped course “a masterpiece” (he didn’t) and maintained that most other competitors “loved it” (they didn’t).

If there was ever a player who would fit right in inside one of Donald Trump’s gold-embossed boardrooms, where boasting with superlatives about oneself is less elective than prerequisite, Patrick Reed might be that player. Minutes after tapping in a bogey putt to win the WGC-Cadillac Championship by a stroke, he was asked on live television what he thought of a game that has yielded three PGA Tour wins in the past seven months, all before his 24th birthday.

“I just don’t see a lot of guys that have done that, besides Tiger Woods, of course, and all of the other legends of the game,” he said. “I believe in myself - especially after how hard I’ve worked - that I’m one of the top five players in the world. To come out of a field like this and to hold on wire to wire like that, I feel like I’ve proven myself.”

There’s a fine line between confidence and cockiness, between brashness and arrogance, between offering an honest opinion and articulating something better left to one’s inside voice. And it’s clear that Reed doesn’t mind walking that line, which also makes him something of a walking contradiction – a professional golfer who is comfortable telling the world how good he thinks he is.

Love it or hate it – and judging by initial reaction to his comments, there is no in between – you’ve gotta admit: We could use a Richard Sherman type in between the ropes.

Me? I love that the kid’s got brass ones bigger than The Donald’s oversized cufflinks. I love that he isn’t afraid to wear a red shirt and black pants with Woods playing in front of him on a Sunday afternoon. I love that when asked about his chances at next month’s Masters, the first major he’ll ever play, he said, “I know that any event I tee it up at, I have a chance to win.”

Maybe I’m in the minority on this one, but to those who disagree, I’ll ask this question: Who would you rather have competing for your country with the Ryder Cup on the line, a player who consistently talks about trusting the process or one who demands to run the anchor leg because he knows he’s going to win? Give me confidence in a 5-and-4 walkover every time.

And just in case you were wondering, that’s exactly what Reed did back in college at Augusta State. He told the coach – yes, told; not asked – that he would go last. End result: He never lost in match play and the team claimed two consecutive national championships.

When asked to list his top five, Reed named Woods, Adam Scott, Phil Mickelson, Graeme McDowell and Dustin Johnson along with himself. (Hey, maybe there’s a tie.) That wasn’t a direct swipe at Rory McIlroy or Jason Day or Henrik Stenson or anyone else. It was just him believing in himself.

Before Reed gets slammed too much for speaking out of turn, it should be noted that he isn’t simply trolling his peers for the fun of it. In fact, just the opposite is true. He wants to earn their respect and cares what they think of him.

“Of course I care,” he said. “It's always nice to get congratulations from other PGA Tour players, especially a lot of the guys that are out here that are veterans, who have won a lot and all that kind of thing. I grew up watching those guys, and I was always watching them on Sunday coming down, winning events, and believing in myself and also dreaming about winning events.”

Here in Donald Trump’s biggest and – believe it or not – most blustery boardroom, the champion didn’t just have the lowest score, he might have owned the most hubris, too. As the boss knows all too well, that’s always a vital commodity.