The Rise of the PGA Tour Rookie 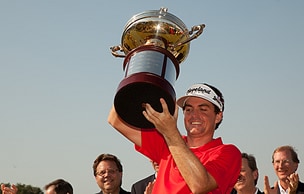 Jhonattan Vegas had barely clinched the Bob Hope Classic in a playoff, winning a PGA Tour title in his fifth career start, when my phone bleated with a new text message.

It was from a veteran player who has yet to earn any first-place hardware and it was dripping with sarcasm: “Guess winning out here isn’t that difficult after all.”

Little did he know back in January, but rookie triumphs were about to become the hottest thing in golf since titanium drivers. Vegas was followed in the winner’s circle by fellow Nationwide Tour graduates Brendan Steele (Texas Open) and Keegan Bradley (Byron Nelson Championship) – each of whom would be putting together a pretty decent resume for his Rookie of the Year candidacy if it wasn’t for Charl Schwartzel, who simply won a little toonament called the Masters.

That’s four fantastic freshman finishes in the season’s first five months. If that sounds like a lot, well, it is. Last year, only two rookies won all season. The year before? Zero. The year before that? Four, but only one at this point in the calendar.

In the three decades since 1980, first-year Tour members have accounted for more than four victories on only three separate occasions. In the six-year period from 1981-86, there was a total of four rookie wins – equal to the number in the first 23 events this season.

All of which leads to – quite literally – the million-dollar question: Why?

Well, first let’s remove Schwartzel from the conversation. An elite player for years with a half-dozen international victories, his greatest success just happened to coincide with taking up PGA Tour membership this season. It shouldn’t come as a surprise that he won, although becoming the first rookie to claim a major since Todd Hamilton seven years earlier certainly wasn’t expected.

The other three were each among the top 14 money leaders on the developmental circuit last year – and they each credit that experience for helping them win so quickly in the big leagues.

“I think this just shows how strong the Nationwide Tour is,” said Bradley, who defeated Ryan Palmer on the first playoff hole outside Dallas to win Sunday. “I was as prepared as I could be. I felt like I was ready and I wanted to contend and have the chance to win.”

“I felt like I was ready, but I didn’t think I would. I thought I’d see more good results before I won,” explained Steele, whose best result other than his victory is a T-17 at the Farmers Insurance Open. “The best explanation I can give is that the levels below the PGA Tour are getting better – college, Canadian Tour, Nationwide Tour – everything is improving. Instead of a few guys coming out of each tour, more and more are that good coming out each year.”

If this was professional baseball, these rookies would be carrying pink Hello Kitty knapsacks to the bullpen. If it was football, they’d be tied to the goalpost at practice and picking up the tab for extravagant dinners.

Instead, the only hazing taking place comes from weather conditions during twilight practice rounds. The rooks have reported nothing but random acts of kindness from their elders. Steele received a congratulatory phone call from Corey Pavin. Bradley got a handshake from Fred Couples. They both teed it up with Phil Mickelson at The Players Championship.

“With the individual nature of the sport, it’s different,” Steele said. “Everyone has welcomed me with open arms, especially after the win. When you first get out here, it’s sort of an uncomfortable feeling; you haven’t earned any respect. It’s nice to get that respect once you’ve earned it.”

It’s all a complete departure from usual rookie strategy: Work hard, grind away, get some experience, hope to play well, try to keep your card. Now these players can hit the ground running filled with confidence.

It doesn’t hurt that there’s a team mentality among the newbies in this ultimately individual pursuit.

“There’s a tightness amongst the 25 Nationwide Tour guys that graduated, no question,” Bradley maintained. “It’s amazing. It’s like we’re in some sort of weird club or fraternity together. It’s good to have out here; it can be lonely out here.”

“You’re almost like a graduating class out of high school or college,” Steele added. “They’re the guys that you know, you’re all in the same boat. I like Jhonny a lot, even though I don’t know him overly well. I’m good friends with Keegan, he’s a great guy and great player. I wasn’t surprised at all by his win; it was only a matter of time.”

All of which leads to the next step: The battle against complacency.

Sounds like that text message had it all wrong. Considering the moxie and preparedness of the current rookie crop, it’s becoming more difficult than ever to win PGA Tour events.