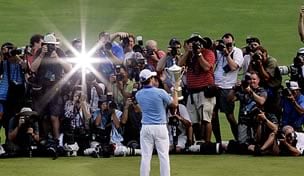 Getty Images
NORTON, MA - SEPTEMBER 04: Mike Weir of Canada hits a drive during the first round of the Deutche Bank Championship at TPC Boston held on September 4, 2009 in Norton, Massachusetts. (Photo by Michael Cohen/Getty Images)  -

BETHESDA, Md. – Sixty-five million years ago, when the planet morphed from the Mesozoic Era into the next time period, there was no defining moment. No big bang. No singular conflict. No writer’s guild of the stegosaurus – yes, those were the ones with small brains – penning columns in the dirt declaring such a transition.

Those who do not learn from history are doomed to repeat it, the saying goes – and it doesn’t get much more historical than the Age of Dinosaurs. The primitive beasts didn’t suddenly decide to become extinct one fateful day. It took years for this progression to advance to the point where they no longer roamed the earth.

What does all of this have to do with golf? Well, plenty.

Following his runaway victory at the 111th U.S. Open Championship, many have been quick to proclaim this new interval the Rory McIlroy Era.

Lest we’re doomed to repeat history – which at this point in the analogy would require pterodactyls swooping down on future major championship venues – we should learn that eras aren’t born overnight. They develop gradually over time, a series of occurrences leading to a transformation in the way things are perceived.

No big bang. No singular conflict.

And just as the small-brained dinosaurs failed to declare certain transitions around them, we should hold off on pronouncing the game’s most recent result as a definitive changing of the guard.

If that sounds pessimistic based on Rory’s romp through the field at Congressional Country Club this week, it’s understandable. After all, it was difficult to watch McIlroy shoot 65-66-68-69 en route to breaking a dozen records and not believe that he is not only the future of golf, but the game’s present, too.

At the ripe old age of 22, the Northern Ireland native displayed a performance we haven’t witnessed since the heyday of Tiger Woods, the last professional golfer to have a so-called era named after him. He averaged 310 yards per drive. Found 64 percent of the fairways. Hit 86 percent of the greens in regulation. Posted one eagle and 19 birdies. Triumphed by eight strokes.

It was the type of performance that makes us think he may never lose again, that it’s McIlroy – not Woods – who is the obvious successor to Jack Nicklaus’ crown as the reigning king of major victories. It was enough to crank the hype machine to 11 and rain down the hyperbole.

Even his fellow competitors were in on the act.

“Nothing this kid does ever surprises me,” said last year’s U.S. Open champion Graeme McDowell, also from Northern Ireland and a friend of McIlroy. “He's the best player I've ever seen. I didn't have a chance to play with Tiger when he was in his real pomp, and this guy is the best I've ever seen – simple as that. He's great for golf. He's a breath of fresh air for the game and perhaps we're ready for golf's next superstar and maybe Rory is it.”

Pardon my Irish, but “de reir a cheile a thogtar na caisleain” – which translates as “it takes time to build castles.”

One week ago, many were proclaiming this to be the Era of Parity. The year’s second major was widely believed to be among the most wide open in recent memory, with so many players seemingly having a chance to claim the hardware.

And why not? In the first half of this season, only two players had claimed multiple PGA Tour titles and neither more than twice. Over the past calendar year, the major champions list included four first-time winners. The notion of one man dominating the game was as foreign as the players claiming those trophies.

That doesn’t change in four days.

It especially doesn’t change when a player grabs just his third career professional victory. Of McIlroy’s other two, one came two years ago in Dubai, when a five-shot lead with nine holes to play turned into a one-stroke win only when he saved par from a greenside bunker on the final hole. The second came last year in Charlotte when he made the cut on the number, then flew under the radar – at mach speed, no less – to come from behind and win the title.

There’s no denying what McIlroy accomplished at the U.S. Open was the stuff of genius. Let’s keep it in perspective, though. Just 11 months ago, Louis Oosthuizen blitzed the Open Championship field at St. Andrews, winning by just one fewer shot than Rory did at Congressional this week. While hailed in headlines as “King Louis,” he barely received his 15 minutes of fame, let alone his own era.

Yes, McIlroy has all the tools to become one of the greats, but until he begins dominating like this on a regular basis, it’s premature to anoint the new world No. 4 as the game’s lone shining star. And that's OK. At an age when most young people are either ferociously clicking through Monster.com postings or joyfully finding themselves while backpacking through Europe, he’s on top of the golf world.

Someday we may indeed look back on his historic performance at the U.S. Open as the beginning of his reign, just as we reminisce over Woods’ initial major win at the 1997 Masters as the start of a legendary run through the record books.

Today is not that day, though. Let’s enjoy what the newest major champion accomplished, but much like our planet’s transition 65 million years ago, golf’s advancement to the Rory McIlroy Era should be a gradual process.