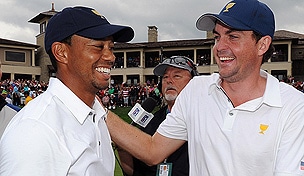 Getty Images
KIAWAH ISLAND, SC - AUGUST 10: A spectator looks on from a tree during Round Two of the 94th PGA Championship at the Ocean Course on August 10, 2012 in Kiawah Island, South Carolina. (Photo by Sam Greenwood/Getty Images)  -

Based on that information, this past weekend’s 18½ to 15½ victory at the Presidents Cup shouldn’t mean much, right? It should hardly serve as a potential preview of things to come at next year’s Ryder Cup, wouldn’t ya think?

Not so fast, says the man in charge.

“This is an indicator and I think a pretty good indicator of how the players play together, how they play a match very similar to the Ryder Cup,” captain Tom Watson said in a phone interview with GolfChannel.com on Monday. “I get a lot of positive thoughts about what happened in the Presidents Cup.”

Watson sat in the living room of his Bucyrus, Kan., home watching as much of this past weekend’s coverage as he could. What he couldn’t watch live, he would record on his DVR, then he’d catch up at night. In between, he would check in by phone with assistant captain Andy North and PGA of America president Ted Bishop, each of whom were on site at Muirfield Village. When asked how much he was able to glean from the competition, he explained without hesitation, “I got a good feel of what was going on.”

And he liked what he saw.

To say the captain did his homework is an understatement. Less than a minute after picking up the phone on the morning following the U.S. victory, Watson was ticking statistics off the top of his head.

“Well, you look at the team’s record and only one player was less than 50 percent. Everyone else was 50 percent or above it,” he recited. “The American team played well. They played very well.”

His categorization of “they” will now morph into “we” as the calendar officially shows next year’s match at Gleneagles as the next of the international team events. As we’ve learned in the past, of course, one year can make a world of difference. A roster comprised of largely the same players that hasn’t lost in a decade-in-a-half at the Presidents Cup has by contrast won just a single Ryder Cup title this millennium.

Even so, Watson believes his team gained more than just false confidence at an event it always wins.

“What impressed me the most,” he said almost incredulously, “were all the birdies that were made. The golf fan likes to see birdies.”

So, too, does the captain, who took special notice of the Phil Mickelson-Keegan Bradley, Jason Dufner-Zach Johnson and Tiger Woods-Matt Kuchar pairings as ones that looked impressive.

Not that he’s tipping his hand, especially so far in advance.

“It looks as if Tiger and Kooch had a lot of good mo’ going on,” he said of the new partnership that compiled a 3-1-1 record together. “I’ll look at the relationships that were made. I’ll talk to other people who were involved there and get some more inside info. I’m not going to make team decisions yet, but they certainly played well together in the Presidents Cup. I’ll make decisions based on how players are playing and who they prefer to play with.”

He then gives a slight indication that such decisions may not be as much of a democracy as they were under Fred Couples’ reign last week.

“If I were a player on the team,” Watson declared, “I’d play with anyone the captain wanted me to.”

All of which could, at some point, lead back to the notion that American players have more fun at the Presidents Cup, enjoying the looser environment and lessened pressure.

Watson knows that idea exists, but doesn’t necessarily buy into it.

“You saw the Ryder Cup team on Friday and Saturday last year,” he explained. “They certainly had a lot of high-fives and fist-pumping and all sorts of things going on. When you’re winning, you can do that. When you’re not, you don’t have quite as much of that.”

The U.S. team had plenty of those celebrations going on during the Presidents Cup. Watson has been charged with ensuring they continue next year, too. But he also understands the only thing that can elicit such festiveness.