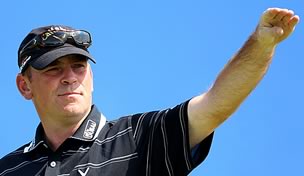 SANDWICH, England – They are two men separated by a moment.

Thomas Bjorn was the wily veteran. For years, a highly ranked European Tour pro, the Dane was amongst the best players without a major victory. Until now. This was his time. His opportunity to join the exclusive club of champions and have his name engraved on the claret jug.

Ben Curtis was the rookie. The 396th-ranked player in the world, he had never even recorded a top-10 on the PGA Tour. When he was paired up with local caddie Andy Sutton at the beginning of the week, the looper’s first reaction was, “Ben who?” He would assuredly melt under the pressure of it all.

The year was 2003 and – until this week – it was the last time Royal St. George’s hosted the Open Championship. Take a walk on these storied links and the memories of that Sunday afternoon come flooding back.

Bjorn with a one-stroke lead on the 16th hole. Curtis raking in an eight-foot birdie putt on 18. Bjorn needing three swipes to emerge from a greenside bunker. Curtis being told by Sutton on the practice range that he was the newest Open champion.

“He yelled it out from about 50 yards away,” Curtis recalled in a Monday press conference. “He was standing on a trailer watching it. I was just down there staying loose because really, to be honest, I thought I was going to be in a playoff.”

They are two men separated by an aftermath.

Curtis returned to his native Ohio as a conquering hero, met at the airport by thousands of new yet adoring fans. It was golf’s ultimate Cinderella story relived, as he became the first man since Francis Ouimet in 1913 to triumph in his first major championship start.

He may have never been confused for the game’s most talented players, but he didn’t fade from the limelight forever, either. Curtis carved a consistent, workmanlike career in subsequent years, backing up that historic win with two more PGA Tour victories.

Bjorn, meanwhile, struggled to regain the edge that had once made him one of the world’s best. Less than a year after seeing his Open hopes thwarted, he was 4-over-par through six holes in the opening round of the Smurfit European Open when he walked off the course.

'I just can't face the tournament situation. I'm fighting demons at the moment,' Bjorn said at the time. 'I still have as much love for this game as I've ever had, but I want to get away, sit down and think about what I need to do. I work hard on Mondays, Tuesdays, Wednesdays and then on Thursdays it just all seems to collapse. It's the worst stretch I've ever had in my life.”

They are two men separated by recent results.

The story of Curtis and Bjorn does not end with wins for the former and demons for the latter.

In fact, the 2003 champion hasn’t seen the winner’s circle in nearly five full years, each of those two titles coming at tournaments which became defunct shortly thereafter. He is now struggling with his game, making the cut in just seven of 15 starts so far this season, with a top finish of 12th place.

Bjorn’s demons, on the other hand, are a thing of the past. He has recovered to not only find his game, but find success once again, culminating in a victory at the Qatar Masters earlier this year – his fourth win since being plagued by such lapses so many years ago.

“This is a massive step in the right direction, but I'm by no means there yet,” Bjorn said after winning by four shots. “But I've got to take all of the positives out of this and be happy with what I've done this week, and taking a big leap in the right direction. But got to keep on from here. There's a long way to go.”

They are two men separated by a barrier.

As a former Open champion, Curtis’ place in the field is guaranteed through his 60th birthday. Year after year, he can book his flight and accommodations months in advance, knowing that no matter how well or poorly he’s playing, the invitation always stands.

Runner-up finishers are not afforded such luxuries. And so it was that after many alternates had reached this week’s field following withdrawals from qualified players, entering Monday the last player on the outside looking in was none other than Bjorn – the ironically placed 157th player in a 156-man field.

“Thomas is a good guy and a good player,” Curtis said of his one-time foe. “It would be a shame if he’s not playing here this week.”

A shame, yes, but poetic, considering the perpendicular timeline of achievements and travails between the two men.

They remained separated until late Monday afternoon, when it was announced that Vijay Singh – the other runner-up to Curtis the last time this event was held here –withdrew with a back injury, opening up a final spot in the field for Bjorn.

And so eight years after their stories became intertwined, Ben Curtis and Thomas Bjorn will once again compete at Royal St. George’s in the Open Championship, reliving so many memories along the way.

They are two men separated no longer.