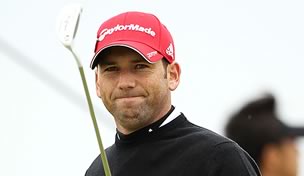 Getty Images
HONOLULU - JANUARY 15: John Daly waits to play a shot during the second round of the Sony Open at Waialae Country Club on January 15, 2010 in Honolulu, Hawaii. (Photo by Sam Greenwood/Getty Images)  -

The Open Championship [is] the best tournament in the world, in my opinion. … I have great memories from the Open. I hit so many good shots and so many good things that happened that it's hard to describe how good I feel. – Seve Ballesteros

SANDWICH, England – As if the vivid recollections of the three-time Open Championship winner weren’t persistent enough, his likeness is depicted on posters throughout the entrances to Royal St. George’s this week.

Exactly two months and seven days after the passing of one of the European Tour’s greatest legends, the impact of Severiano Ballesteros still reverberates at this tournament, still echoes throughout these links.

His legacy remains on the leaderboard, too, where through the first round of the 140th edition of this event, two of his countrymen have already put themselves in contention to become the second Spaniard to ever claim the claret jug.

Miguel Angel Jimenez posted a flawless 4-under 66, Pablo Larrazabal shot 2-under 68 and Sergio Garcia shot even-par 70 to stoke an early underlying subplot. Each still has 54 long holes remaining, but if either of the three could follow in Seve’s footsteps and win this championship, it would become quite the story – and surely an emotional one.

“The tribute to Seve here is very nice because we miss him and he made so much for golf all through his life,” Jimenez said. “We have to thank him for what he did for golf.”

What he did was ensure that the game grew globally, bringing a European flair to worldwide events. Much of that impact came at the Open, where he was a star almost from the start.

After missing the cut while laboring with a foot injury in his first appearance, Ballesteros finished in a share of second place at Royal Birkdale one year later as a 19-year-old, six shots behind Johnny Miller and tied with Jack Nicklaus.

“I was with my brother, Manuel, and I caddied for him in the prequalifier,” Seve recalled years later. “And then when I shot 69 the first day, they said, ‘Manuel, Manuel, congratulations, 69.’ He said, ‘No, it's not me. It's my brother.’ ‘Who is your brother?’ ‘This guy sitting over there.’ They said, ‘Oh, s**t, this is your brother? I thought that was your caddie.’”

Quickly after distinguishing himself from the bagmen, Ballesteros won the tournament by three strokes in 1979 at Royal Lytham & St. Annes, then added a second title five years later and a third three years after that.

His significance was so weighty that even Garcia spoke after the roundabout thinking of him on the course.

“He did come to mind here and there,” he said. “Obviously, it’s hard enough already, so you want to try to give your attention on the right things. But yeah, he came to mind. It’s not only here. He’s going to be very missed for a long time.”

In particular, Garcia thought of his predecessor during a tricky up-and-down at the 15th hole. After extricating himself from the greenside bunker, he holed a lengthy par putt to remain at 2 under, only to drop two strokes on the final three holes.

Jimenez, on the other hand, claimed he didn’t think about Seve on the course, having surpassed the grieving period.

“I think it’s time to concentrate on moving on, starting to move on, because if not, you cannot play,” he explained. “We are human and it’s the moment to say, ‘OK. Go.’”

Whether Ballesteros remains a constant in his countrymen’s thoughts or rarely enters them, his impact on their careers remain to this day, with so many Spaniards on the leaderboard.

If he was still around, there’s no doubt whom he’d be rooting for, either. During his last trip to the Open four years ago, Jimenez and Garcia were both in contention late in the week, when Seve was asked if he would be cheering them on.

Those rooting for a heartwarming story will root for the Spaniards this week, too.