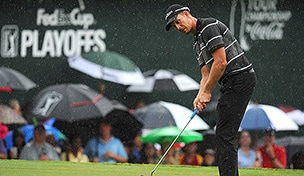 ATLANTA – If you close your eyes and try with all your might, you can probably picture PGA Tour commissioner Tim Finchem trying different playoff systems on for size, like a modern-day, buttoned-up, brand-speaking Goldilocks in a quest to find perfection in the house of the Three Bears.

Since its inception in 2007, the FedEx Cup format has often resembled a bed that’s too soft or porridge that’s too hot. In effect, it seems there is always some sort of problem with it.

Never has it been “just right.”

Of course, that notion may speak to the fact that Goldilocks is too finicky rather than the Three Bears owning an imperfect porridge recipe. In more direct terms, since there’s no singular system that will please everyone, there will always be some preaching for improvement.

With just 18 holes left to play in the 2013 campaign, the classic example of consternation is staring back at us from atop the FedEx Cup standings.

Henrik Stenson, who failed to win a tournament during the PGA Tour’s regular season, owns a 2,027-point advantage based largely on winning the second playoff event and holding a four-stroke lead here in the finale. Tiger Woods, who in no uncertain terms enjoyed the best season of any player this year with five victories, finds himself in second place in the standings, dropping a spot by ranking in a share of 26th place on this week’s 30-man leaderboard.

All of which could lead to potential grousing from all angles.

There are those who will argue that Stenson doesn’t deserve to win the FedEx Cup because he wasn’t the best player all year.

(Counterargument: Playoffs aren’t supposed to reward the best performer for the entire year.)

There are those who will argue that Woods deserves to win because he was the best player all year.

(Counterargument: Again, that’s not the true idea of a playoff system.)

There are those who will argue that Woods doesn’t deserve second place because he’s played so poorly in the finale.

(Counterargument: The eventual standings shouldn’t simply mirror those of the closing tournament.)

It should come as no secret that since the FedEx Cup was instituted, the PGA Tour has been trying to serve two masters.

Those in the circuit’s Ponte Vedra Beach offices want to reward the players who have enjoyed the best season. But they contrastingly want to provide a thrilling finish for the fans that can ultimately prove volatile.

What’s left is a system that is a little of both. Not too hot, not too cold – but maybe not exactly “just right,” either.

“I don't know where I need to finish, and it all depends on where Tiger and Adam [Scott] finish and so on,” Stenson said after a third-round 69. “Well, Tiger in particular, I guess at this point. But it's still an open ballgame, I'm sure. First of all, I'm interested in winning the tournament. And I know if I do that, then I'm going to win the FedEx Cup.”

His words recall those of Bill Haas from the 2011 edition of this tournament. After getting into a playoff and winning the tournament, he maintained that he didn’t know his standing as far as the $10 million grand prize for winning the FedEx Cup, too.

That said, he’s also proving what those teams proved in their given playoffs, as well.

Just get in, then anything can happen.

Stenson was ranked ninth in the standings prior to the playoffs. He’s gotten hot at the right time, which is the very strategy behind succeeding in any playoff format. And now, with one final round left to be played, he owns the best chance to win the whole thing.

That can even happen if Stenson blows his four-stroke lead on Sunday and loses the tournament title. The math behind the system shows he could very well still win the FedEx Cup in this scenario.

Despite contending throughout the week that his main goal is to win the event, Stenson admitted that he’d celebrate – albeit a bittersweet celebration – if he finishes, say, runner-up at the tournament, but wins the FedEx Cup.

“I'll still be pleased to a degree, yes,” he explained. “Of course I want to win two. If I can't win two, I'll be very pleased to win one. If I'm winning nothing, it will probably be not so sweet from this position. But I didn't have anything when I came here, so we'll see what we'll leave with.”

If that happens, expect more hand-wringing and consternation over the FedEx Cup format.

It may never be “just right,” but it’s far from wrong.