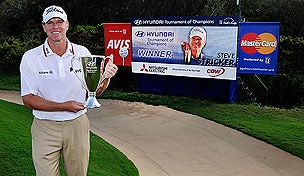 Debate this notion if you must, but even Stricker himself would concede that he’s vanilla in a world of flavor, soft rock in a land of hip-hop.

The bigger question is: Why?

I’ve spent more hours than I’d like to admit trying to figure it out. I mean, Stricker doesn’t do anything differently than any of the so-called exciting elite golfers out there. He swings the club, hits the ball, walks after it and hits it again. Just like everybody else.

OK, so there are a few differences. He doesn’t hit 400-yard rain-makers like Bubba Watson. Doesn’t exuberantly pump his fist after birdies like Tiger Woods. Doesn’t have a cool name like Rory McIlroy.

Nope, none of those. Instead, all Stricker does is win tournaments and retain his lofty status on the Official World Golf Ranking.

What a boring guy.

It happened once again at this week’s season-opening Hyundai Tournament of Champions. Stricker jumped out to a second-round lead and never trailed, earning his 12th career title and eighth in the last four years – more than any other competitor – while ascending to fifth in the world.

The GolfChannel.com team weighs in: What We Learned from the Hyundai TOC

The victory wasn’t without its share of drama, though. Stricker entered Monday’s final round with a five-stroke advantage, but saw that dwindle to a single shot before he reached the eighth hole.  From there, he was able to hold off challengers Jonathan Byrd, Martin Laird and Webb Simpson

Even so, Stricker’s win – and Stricker himself – will likely be defined less as exciting than workmanlike.

Think about it. You need only review last year’s NBA Finals, when the team-oriented Dallas Mavericks defeated the much-ballyhooed superstar-laden Miami Heat squad. It was hardly the first instance of substance over style and it certainly won’t be the last.

Don’t confuse Stricker’s lack of excitement for a lack of reasons to root for him. In fact, he’s an eminently likeable guy. A salt-of-the-earth type who still resides in his hometown of Madison, Wisc., even though the winters can usually be described as the antithesis of Kapalua.

He’s a good family man. Sure, most players bring their wife and children to Maui. And most would have them walking along if they were winning, ready for hugs on the final green. Stricker’s devotion to his family goes beyond that. In a taped segment during the final-round telecast, he broke down crying when talking about the importance of being a good father.

He’s emotional. If the taped tears weren’t enough on Monday, the live ones flowed as soon as the final putt dropped. Stricker may not have cried after each one of his dozen career victories, but he certainly has for the majority of them.

He’s getting better with age. Stricker will turn 45 next month, but continues improving with each year that goes by. Here’s the most telling statistic of his career: In his first 348 starts, he won four times; in his last 50 starts, he’s won eight times. It was that experience that he said helped him weather the storm when the lead had waned.

“I had good feelings coming out today. My swing felt good,” Stricker said after posting a final-round 4-under 69. “It was just harder to get the ball in the hole. I don't know if this win would have happened if I was a lot younger. Being out here a few years and experiencing the things I've experienced, it made it a little bit easier to hang in there.

“Obviously I changed my game and my swing. I have a lot more confidence nowadays than I ever had when I was younger. I have a better idea of what I'm doing with my swing and where the ball is going. I guess I put it all together as I got older and got to where I feel good about it.”

Stricker’s story is one of motivation and determination. One that has seen its share of peaks and valleys, one that can now be qualified as an ultimate success story, no matter what the future holds.

That may not be the most exciting story in golf, but Stricker is fine with that. He’ll just keep collecting trophies instead.