There's another side to Bubba Watson 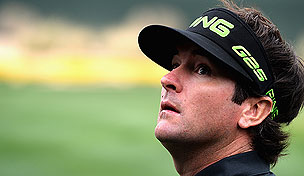 Getty Images
Jordan Spieth of the United States poses for a portrait on the range ahead of the Northern Trust Open on February 18, 2015 at The Riviera Country Club in Pacific Palisades, California. (Photo by Marianna Massey/Getty Images)  -

SCOTTSDALE, Ariz. – Here in the middle of golf’s biggest party, somewhere within the maelstrom of debauchery and frenzy and madness, amongst the inebriated masses and around the overzealous partygoers, a shocking contradiction sits atop the leaderboard.

Bubba Watson is a favorite of these jam-packed galleries. He’s a former resident of the area, a Masters champion, an absurdly long hitter, an outwardly emotional soul and – let’s face it – who doesn’t like rooting for a dude named Bubba?

And yet, if the thousands of fans loudly chanting his name think they’re simply cheering a guy like them, one who would join the party if he weren’t performing in front of it, they’re highly mistaken. That’s because as the festivities rage on, Watson has used this week as his own personal paean to their antithesis.

On Monday, there he was at the Phoenix Children’s Hospital, checking out the state’s first pediatric gait lab, for which Ping Golf had donated $250,000 last year from a campaign developed around Watson. When it was found the project was still $110,000 short of its goal, Watson chipped in the remainder of the funds.

On Thursday, while tipsy fans crowed for his autograph nearby, he cited Bible verses as reasoning for being, as he called it, content with his circumstances.

On Friday, he met with two families, winners of the “Bubba Fan Flyaway” contest on Twitter, each – like Bubba and wife Angie - with an adopted child, their stories serving as inspiration to him as much as the other way around. After that, he was off to the Phoenix-based Desert Mission Food Bank, where along with friends and relatives he would put together snackpacks for schoolchildren whose families didn’t have the means to feed them nutritious meals during the weekends.

“Instead of giving money,” he said after hearing about the program, “I wanted to do it, too.”

In between all of these charitable endeavors, Watson also played a little golf, following an opening-round 64 with a 66 to grab a share of the Waste Management Phoenix Open lead alongside Matt Jones.

While it’s easy to spot the contrast between the legions of spectators using the tournament as just a warm-up act for the Birds Nest nightlife and Watson’s contributions, he points out that they’re all part of the same end goal.

“I think if you really look deep into it and not worry about what people are doing, the money that is being raised for charity at this event equals out to the same thing I'm doing,” he said. “I think this is one that's giving away a pretty good lump sum of money for charity.”

“That’s why the Thunderbirds do all of this; I think a lot of people lose sight of that,” agrees Angie. “What goes on at 16 raises more money for charity than any other hole on the PGA Tour. That’s really what it stands for.”

Maybe the abundance of off-course diversions this week has helped on the course for Watson, who has confessed a self-diagnosis of attention deficit disorder.

In Friday’s second round, he carded seven birdies against just two bogeys in his continuing search for another victory following the Masters triumph of two years ago. That’s what happens when you pair leading the field in driving distance (at a whopping 340 yards per drive) with a second-place position in putting average – a symbiotic combination if ever there was one.

“Everything is clicking right now,” he explained. “I played really well last week, just didn't make the putts. This time I'm playing well and some of the putts are dropping.”

As Watson ruminated on his place on the leaderboard, he appeared fatigued, melancholy, maybe even a bit agitated.

“No, I'm just tired,” he allowed. “Very happy where I am. Who would not be happy? There's a lot of guys going home who wish they were right there. I'm very happy with that. Just tired.”

It’s a feeling with which plenty of people here at golf’s biggest party can relate. As the debauchery and frenzy and madness swirls all around him, though, the man who shares the midway lead is keeping himself busy in much different ways.