Tiger on Rory: 'His swing is better' 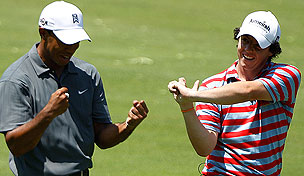 Taken at face value, it sounds like an uncharacteristic admission from Tiger Woods.

During his Tuesday news conference, Woods was apprised of Mark O’Meara’s recent comments about young Rory McIlroy. In essence, Tiger’s old buddy claimed that the reigning U.S. Open champion is a better ball-striker at age 22 than his predecessor.

That’s not the shocking part. No, the real shocker is that Woods agreed.

Tiger just said Rory's swing is better than his own back in the day.

Read between the lines and you’ll understand that Woods was interpreting this message in the most literal way possible. The key term in his response isn’t “better,” but “at the same age.”

Although he won a half-dozen PGA Tour titles, including the 1997 Masters, prior to his 22nd birthday, Woods spent the entire 1998 season – when he was “at the same age” as McIlroy is right now – working through a major swing change and struggling with his game.

When Tiger was 22, he won the Johnnie Walker Classic and the BellSouth Classic, but otherwise failed to live up to the lofty expectations he had set for himself. Even though Woods finished 18th or better in each of the four major championships, he didn’t add to his major victory total until one year later.

That’s exactly how Woods was answering that question on Tuesday.

“That's kind of where at the same age comparatively, yeah, his swing is better.”

Those final four words will make headlines around the globe. They will be extrapolated into major news, interpreted as Woods admitting a player 13 years his junior has a more efficient swing.

“That was pretty good, wasn't it? That was some seriously good playing,” he said. “It was cool to see that he had softer conditions and he was able to go low but also was able to continue pushing it, and that's what's fun when you have a lead is to keep building on it and keep pushing.

“Those conditions weren't such where pars were going to build leads and an occasional birdie. You had to go out there and be aggressive and go get the birdies because everyone else was; everyone else was making three, four, five, six birdies a day, and he just didn't make any bogeys.

“That was very impressive playing. To do that at a U.S. Open, to be that aggressive the entire time, that was cool to watch.”

There may be a time – someday in the future – when the Woods-McIlroy rivalry materializes into golf’s next big conflict.

Some will use Tiger’s recent comments as fuel for that fire. Don’t read too much into ‘em, though. They were simply a literal comparison of each player’s game at the very same age.

Woods was right. McIlroy's swing is better at 22 than his was. What does it mean? A whole lot less than most people will interpret it as.