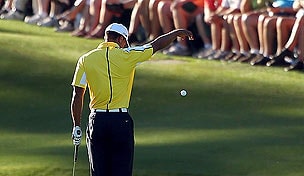 Hey, that’s good enough for me. Sure, the numbers would be more impressive with a major or two thrown in there, but he still claimed two-and-a-half times more titles than any other player. I've always been a 'show me the money' kind of guy – and Woods earned $8,553,439 of it this year. No one else was in the same tax bracket.

If he doesn’t win the PGA Tour’s Player of the Year award, someone should launch an investigation.

And yet, you can’t stumble into a 19th hole without hearing the topic, “What’s wrong with Tiger?” Consider it golf’s version of a trick question, the correct answer ranging from everything to nothing at all.

After the third of those five victories this season, Nike released a print advertisement with the tagline, “Winning Takes Care of Everything.” It echoed a familiar refrain from Woods himself, the point being that finishing atop a leaderboard erases any doubts about swing changes or putting inconsistencies or mental fortitude.

That may be true, but as Woods can attest, so too is the opposite. There is no ad campaign featuring the slogan, “Losing Takes Care of Nothing,” but there easily could be.

In the court of public opinion, Woods’ 2013 season still left plenty to be desired.

Let’s start with the majors. It’s not just that he didn’t win one for the fifth consecutive calendar year; it’s that each major seemed like his own personal Groundhog Day. Get into contention early, then fade on the weekend. The man who used to play major weekends like Louis Armstrong played a trumpet failed to post a single Saturday or Sunday round in the 60s.

• At the Masters: “I had a hard time getting the speed and being committed to hitting the putts that hard.”

• At the U.S. Open: “I struggled with the speed, especially right around the hole; putts were breaking a lot more.”

• At the Open Championship: “You know what? I had a hard time adjusting to the speeds.”

• At the PGA Championship: “It's really tough and the greens are starting to pick up a little bit of speed.”

Woods would consider these explanations, simple answers to the questions he’s asked after the rounds. Other observers, though, would categorize them as excuses.

There’s a fine line between the two – and like so many other lines, he may have misread this one.

But the hand-wringing over Woods’ rationale for flailing at majors was nothing compared with the outright consternation from his rules snafus. After a career of rarely committing any violations, he found himself adding strokes to the scorecard on three separate occasions.

The first, in Abu Dhabi, Woods took relief from an embedded ball in the sand when that wasn't an option. The result: A two-stroke penalty that caused him to miss the cut.

The second – and most famous – occurred at the Masters. After hitting a flagstick and seeing his ball carom back into a creek, Woods was found in violation when a former rules official called in a suspect drop. The result: Because tournament officials knew about the potential violation, but didn’t question him before the scorecard was signed, he was given a two-stroke penalty the next day.

The third took place two weeks ago at the BMW Championship – and this is the one that had fans and, yes, even fellow players up in arms. Not because Woods failed to assess a penalty when he didn’t see his ball move after clearing loose impediments from behind it, but because after he was shown the video he still disagreed despite the evidence, displaying a serious case of righteous indignation. The result: Another two-stroke penalty.

And these three violations don’t even include the one for which many people feel Woods was most in the wrong, a suspicious drop on the 14th hole at TPC Sawgrass after hitting his tee shot into a lateral hazard. One PGA Tour pro whom I spoke with recently called this easily the most distressing of his rules situations this year.

We should probably forgive a guy whose season was filled with so much drama for being exhausted by the end of it.

Then again, this isn’t just any guy. This is the guy who has forged a Hall of Fame career from outworking and out-training and out-everything everyone else. The guy who wakes up at ungodly hours to run and lift weights. The guy who has trained with Navy SEALs. The guy who caused all the other guys to start hitting the fitness trailer every day.

There he was, though, at this past week’s Tour Championship, saying he was – get this – tired. Didn't just let it slip out, either. He used the word five times in a short interview after Friday's second round.

Compare that with Adam Scott, who has now stolen Woods’ swing and his caddie and his green jacket: “If I tell you I'm feeling tired this year, you can slap me across the face.” It should be noted that Scott played the exact same number of PGA Tour events as Woods this season.

All of these issues – from the consistent explanations about major championship green speeds to the rules snafus to the late-season exhaustion – have done some damage to his reputation in the court of public opinion.

Not that he’ll admit worry or feign concern.

When asked after his final round of the season, a 3-under 67 that left him in a share of 22nd place, to assess his body of work, Woods maintained contentment.

“[I’m] very satisfied. I had a number of chances to win some tournaments. I won five, which is, I think, a pretty good year,” he said. “I wish I would have been a little more consistent in some of the events, but overall, at the end of the day, you know, to add to the win total for the year, it's always a good thing.”

In other words: Winning takes care of everything.