Toast of the Town 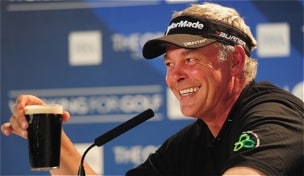 SANDWICH, England – In the gloaming of Royal St. George’s, following Darren Clarke’s marvelous march toward victory at the Open Championship, his manager Chubby Chandler was being interviewed not far from the 18th green.

The reporter queried Chandler on certain aspects of his client’s win for a few minutes, then concluded the interview by telling the former European Tour golfer, “I know you have a lot to do…”

That’s when the robust Chandler interjected, jabbed an index finger at the reporter and with a broad smile, added, “A lot of drinking to do!”

When asked to assess why he’s such a popular player amongst the masses, Clarke surmised, “Because I’m a bit of a normal bloke, aren’t I, really? I like to go to the pub and have a pint, jump on Easy Jet, fly home, buy everybody a drink, just normal. There’s not many airs and graces about me.”

The newest strategy to winning major championships these days has less to do with minutiae like decreasing wrist supination or mastering Zen golf and more to do with partying hard – or at least partying more than hardly.

That’s right. The key to playing better golf may just be … having fun.

Think about it: Do you play better golf when you’re grinding away, sweating over every single shot? Or when you’re out with some buddies – calm, relaxed, smiling and maybe even throwing back a few cold ones?

That’s not to say every pro should replace his vitamin-filled energy drinks with pints of Guinness, nor is it suggesting that a player’s success is directly correlated to his alcohol consumption. It’s more about attitude. Throughout the final round, Clarke could be seen smiling and cavorting as if competing in a practice round rather than the most important 18 holes of his life.

It’s a lesson some American golfers could stand to learn. If you haven’t heard, the red, white and blue hasn’t won in six straight majors. You needn’t look at a final leaderboard on Sunday to know that, either. When contenders such as Phil Mickelson and Dustin Johnson were cruising along, there were grins and fist pumps galore, but as their games went south, their contorted body language did, too, with slumped shoulders and bowed heads their lasting images down the final stretch.

Almost immediately upon Clarke’s clinching putt, the words of his peers, through post-round comments and personal tweets, were uniform in their theme: Couldn’t have happened to a better guy.

And so he won’t lack for celebration partners in the aftermath of his win. If the journey toward a major title took 42 years and his Sunday victory march absorbed just over four hours, then the revelry will last, well, somewhere in between those two.

Make that a double for his countrymen back home.

“They’re probably all getting pissed,” Clarke guessed, “which means they’re drinking too much. They’re probably all having a drink in Portrush. If they’re not, I hope they are. They’re having parties all the time – party for GMac [Graeme McDowell] and party for Rory [McIlroy] a couple of weeks ago, and I’m sure I’ll have another one this week.”

This isn’t a party that will end anytime soon. If it appeared Clarke owned the right frame of mind prior to winning The Open, he’ll now be deliriously drunk on success – and other things.

And the good times will keep on rolling.