U.S. Open to return to Torrey amid high expectations 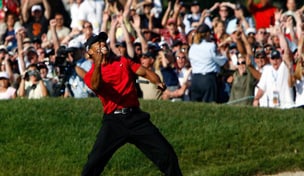 Getty Images
The club head stays outside of Martin’s hands, and doesn’t get whipped inside, reducing the chances of him rotating the club face and hitting it left. (Analysis: GCA lead coach Charlie King; photo: Fred Vuich)  -

Let’s start this column off with something we can all agree upon: The 2008 U.S. Open was one for the ages.

Everyone nodding their heads in unison? Good, you should be. As if anyone needs reminding, that was the year Tiger Woods – all-time great, broken leg, clutch putter – defeated Rocco Mediate – man of the people, balky back, ultimate grinder – in one of golf’s most entertaining thrill rides of this or any other generation.

By any fan’s estimation, the first U.S. Open at Torrey Pines had to be considered an unqualified success, even if based solely on the eventual outcome. Same goes for any journalist whose main rooting interest lies with the story, because that week was chock full of luscious storylines.

What about the USGA, though?

In light of Tuesday’s announcement that the U.S. Open will be returning to Torrey Pines for the 2021 edition of the event, that was my question. I wanted to know whether the final result had as much – or even more – of an effect on bringing the tourney back to Torrey than such usual variables as infrastructure and course conditions.

So I asked the man in charge, USGA executive director Mike Davis.

“When you look at the drama that was created back then and you look at how the course tested all parts of the game, yet it didn't necessarily favor one type of game, [those are] absolutely things we look at,” Davis said during a teleconference.

It’s nice to know we’re all on the same page.

Oftentimes in these situations, there’s a tendency to overcomplicate matters from the powers-that-be. You and I might witness the 2008 U.S. Open and proclaim, “Great venue, great event, let’s do it again someday.” But with so many other factors at play when making such a decision, the actual end result can be pushed further down the priority list than it should.

Not this time, though – and Davis deserves to receive kudos for keeping it in the forefront of his thought process.

“When we look back on 2008,” Davis explained, “I think one of the things we all talked about is, ‘How can we possibly top that?’ From my perspective, that was one of the great U.S. Opens ever. Whether it rivals, say, 1913 or 1960 or some of the other great U.S. Opens we've had, history will eventually, I guess, tell that story. But it was a great Open.”

Not that there weren’t plenty of other factors, of course.

The aforementioned infrastructure is already in place based on the fact that Torrey Pines houses two world-class 18-hole golf courses. For one week in June seven years from now, that will be transformed into one world-class golf course and one world-class host of corporate tents, luxury boxes and merchandise booths, although the line of demarcation isn’t necessary drawn between their borders already.

Davis admitted that while the plan is to hold the entire tournament on the South Course, there’s certainly a chance it could also bleed into part of the soon-to-be renovated North Course.

“When we selected this site, we really did it with the idea that we would be focused on the South Course,” he explained. “But having said that, I don't think we would necessarily right now tell you with 100 percent certainty we won't do a composite.”

Course conditions are a factor, too. On a track where Woods and Mediate reached the playoff after playing the first 72 holes at 1 under on what was contested as a par-71, Davis revealed that the USGA might actually need to make the course more playable for the impending U.S. Open.

“One of the things that I found walking the golf course is it's actually become a narrower golf course since the U.S. Open,” he said. “I think one of the things we would do is widen out the fairways a little bit, and there's several cases where some of the roughs are covering up the fairway bunkers. So I think it's minor little tweaks like that. But I really don't foresee any big things being done.”

Those things should certainly be major considerations for any major venue, though perhaps not as much as the competitive environment itself.

The first time – and last time – the U.S. Open was held at Torrey Pines, we were treated to a tournament for the ages. That result shouldn’t have left it a no-brainer to return in the not-too-distant future, but it should have helped the process move along more swiftly.

And that’s exactly what happened when the USGA went in search of filling its next open date. Let’s chalk this one up as a victory not only for the organization, the competitors and the fans, but for common sense, too.