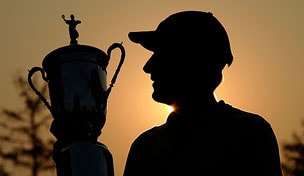 I know who is going to win the U.S. Open.

It all has to do with recent history. The last year has seen a changing landscape in professional golf, with major titles no longer the entitlement of the elite.

A charmer from Northern Ireland, an up-and-comer from Germany and a pair of South African farmboys are currently the four reigning champions, each having “shocked the world” in the past 12 months. None were undeserving nor unqualified, but they were hardly household names when they claimed their hardware.

It’s led to a prevailing sentiment that majors have become anybody’s ballgame. So what is the prototype for winning one?

“I can tell you what it’s not,” 2003 PGA Championship winner Shaun Micheel said. “It’s not a seasoned, veteran player anymore.”

In the past, the quintessential major champion was a straight driver with a deadly putting stroke. Or a big bomber with a sublime wedge game. Or a Seve-like scrambler. Or, well, Tiger Woods.

Those days are over – for now, at least.

“We’re kind of removed from a decade ago, when Tiger was winning every major,” Immelman said. “At that point, everybody thought that you had to have 5 percent body fat and bench press whatever and hit a million golf balls.

“We’re at a point where there’s so many guys who have an opportunity to win. It’s amazing when you look at it – between the Westwoods and the McIlroys and McDowells, the guys we see contending all the time – they all have different actions, they’re all different shapes and sizes and heights. … I think that’s the fascinating thing right now that’s so nice for fans – everybody is a little different.”

With all due respect to Immelman and his fellow major champions, there still is a prototypical player for winning majors.

You just have to know the secret formula. (For my full list of top 25 finishers at this year's U.S. Open, click here.)

Actually, it’s not such a secret. It’s all about just examining the four current major champions and finding commonalities between them.

Graeme McDowell is 5 foot 11, 168 pounds. He was 30 years old at the time of his U.S. Open triumph, ranked 37th in the world and owned five international victories, but none in the U.S.

Louis Oosthuizen is listed at 5 foot 10 and a generous 170 pounds. He was 27 when he prevailed at St. Andrews, then ranking 54th with six international titles, but none in the U.S.

Martin Kaymer seems much bigger, but his bio numbers show him at 6 foot, 165 pounds. He was 25 when he won the PGA Championship and ranked 13th, with seven international wins, but – you got it – none in the U.S.

And lastly, there’s Masters champ Charl Schwartzel, who’s 5 foot 11 and 140 pounds soaking wet. At 26 and ranked 29th when he won, he owned six international victories, but – altogether now! – none in the U.S.

It only appears on the surface like there is no prototype for winning majors, but the statistics show it’s very much the opposite. All recent champions have been within two inches and 30 pounds of each other. They were between 25 and 30 years old. They ranked between 13th and 54th in the world. And perhaps most tellingly, they owned five to seven career wins, but never had any of ‘em in the good ol’ U. S. of A.

Now all we’ve got to do is plug some players into our U.S. Open supercomputer and we’ll actually have a name for this predestined winner.

Let’s try Justin Rose. At 30 years old, ranked 29th in the world and with six international wins, he’s pretty close, but a pair of PGA Tour victories and his 6-foot-3, 185-pound frame means he’s too big to fill these shoes.

Next up is Robert Karlsson.  He’s never won in the U.S. and his world ranking of 23rd is close, but he’s too big, too old and has too many wins around the globe.

How about Alvaro Quiros? The long-hitting Spaniard is 28, ranked 24th and has five international wins with none in the U.S. Could be our newest major champion, but at 6 foot 3, 182 pounds, he’s another guy who’s too large to be in charge.

Check out Francesco Molinari. He’s 5 foot 8, 159 pounds, 28 years old, ranked 20th in the world and has two international wins. So close, but not victory cigar.

If there was only someone else in the Molinari family …

Well, there is. And he just happens to be your prototypical major champion.

Edoardo Molinari is 5 foot 11, the exact average height of the recent major champions. He weighs 163 pounds – 32 ounces heavier than we wanted, but hey, he easily could lose a few in the Congo heat. He’s 30 years old – close enough. He’s ranked 35th – close enough. He owns two worldwide wins and none on the PGA Tour – close enough and perfect.

If pure numerology isn’t enough to get you excited about Edoardo’s chances, there’s some personal history at work, too. He’s already a U.S. Golf Association champion, having prevailed at the 2005 U.S. Amateur on Merion, another difficult East Coast course. In his first U.S. Open start as a pro last year, he was T-16 at Pebble Beach entering the final round before an 8-over 79 pushed him down the leaderboard.

Perhaps more importantly is the fact that he fits the recent champion trend. An elite-level player who has yet to make a name for himself at a major, he’s just the type of guy who’s been winning these things lately.

See, there really is a prototypical major champion. For the upcoming U.S. Open, his name is Edoardo Molinari – and much like McDowell, Oosthuizen, Kaymer and Schwartzel before him, he’s about to “shock the world,” too.