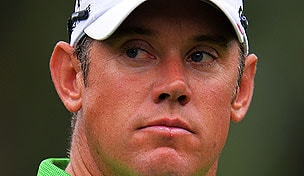 Getty Images
Sarah Lee signs autographs after her round of 68 gave her a two shot lead during the second round of the LPGA Michelob ULTRA Open at Kingsmill at Kingsmill Resort and Spa in Williamsburg, Virginia on May 11, 2007 Photo by Michael Cohen/WireImage.com  -

PITTSFORD, N.Y. – His brawny arms protrude from beneath short sleeves, his barrel-like chest unobstructed by extra layers. The bottoms of his pantlegs are hued three shades darker from trudging through a steady midsummer rain all morning.

Lee Westwood walks with the demeanor of a man who prefers a stiff downpour over a petty drizzle. His fellow competitors compensate for the rain. They wear two gloves. They constantly wipe their hands with towels. They implore caddies to hold umbrellas directly over them like portable butlers.

Westwood doesn't compensate. Take away the moisture framing his background and you wouldn't know whether he's playing golf in rain, heat or anything else. Perhaps that's a nod to the Englishman's hometown of Worksop, where dreary, overcast conditions might as well be a fixture on the daily weather report.

It could explain his relative success in two days of rain at the PGA Championship, posting scores of 66-73 to get into contention on yet another major weekend.

Here's another theory: Maybe Westwood is just comfortable being uncomfortable.

Much like learning to thrive in wet conditions, this, too, isn't something a man is born with. Westwood has become accustomed to being comfortable in uncomfortable situations, the result of so many years of close calls and tough breaks that have earned him the game's most backhanded compliment of a title: Best Player Never To Have Won A Major.

Such numbers should render obsolete any debate for another player to stake claim to this unwanted title. Neither Luke Donald nor Brandt Snedeker nor Sergio Garcia nor Steve Stricker hold Westwood’s dubious record of most places and shows without a win. For a man who owns a share of about 20 thoroughbred racehorses, he has a keen understanding of what these close-but-no-victory-cigar finishes really mean.

Of course, being comfortable in uncomfortable situations isn’t synonymous with being complacent. Westwood has done everything in his power to dislodge himself from that dreaded superlative of a title in trying to become just another run-of-the-mill one-time major champion.

On the eve of his 40th birthday earlier this year, Westwood moved his family from England to the elite golfer hotbed of South Florida, where he can practice year-round without having to train in those very conditions which seem trivial to him in the first place. “Practice conditions are brilliant,” he says with a smile. “It's nice living in shorts.”

That’s hardly the only change he’s made. Already known as one of the world’s preeminent ball-strikers, Westwood has enlisted noted instructor Sean Foley – he of the Tiger Woods and Justin Rose and Hunter Mahan camps – for a few pointers with his swing, less technical pearls of wisdom than theoretical ones. A long-time sufferer of putting woes, he started asking Ian Baker-Finch for a few tips here and there. And three weeks ago at the Open Championship, he sat down with famed sports psychologist Ross Mackenzie for an impromptu session.

That Sunday at Muirfield was the latest of those eight career top-three results at majors, as he turned the 54-hole lead into a share of third place. Another close call could be enough to leave most guys stomping mad with frustration, but Westwood has grown comfortable with these uncomfortable situations.

Which may also serve to explain the end of his round on Thursday here at Oak Hill Country Club. Three strokes behind leader Adam Scott with two holes to play, those brawny arms flaring and the bottom of his drenched pantlegs scraping across the closely mown greens, Westwood runs into the sort of trouble that always seems to follow him at majors.

He misses a short bogey putt on the eighth hole – his 17th of the day – then misses another short attempt for par on the ninth. A laudable round has turned decidedly shaky at the end, rendering him further from contention than he was just minutes earlier. He’s been here before, though. What he says after the round speaks to his ability to remain content in the face of adversity.

“Obviously, I would have liked to have finished par-par,” he admits, “but I’m in red figures going into the weekend and still have a chance.”

From heavy rains to untimely missed putts to a career that so far has defined him as the best player without a major championship, Westwood has often found himself in uncomfortable situations. It’s a good thing he’s learned to be so comfortable in them.