Why not apply Phoenix model to other tourneys? 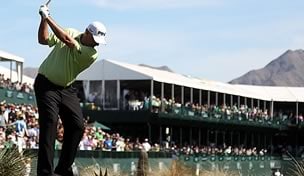 SCOTTSDALE, Ariz. – It’s time for a little lesson in Business 101.

Let's say you and a buddy each own similar companies. You sell similar products and maintain similar bottom-line goals, but you're located in different states, so not only is there no competition, you can assist each other in business secrets so that both may thrive.

Your business is doing well. Steady stream of customers who seem pleased with the product and service. Good enough. But great?

Not when compared with your buddy.

His business is booming. Long line of customers out the front door, all of whom seem to be celebrating their mere presence at his location. Your good is his great.

Now let me ask you: Why haven't you copied this business model yet?

It’s a question that can and should be posed to officials for tournaments across the PGA Tour schedule after yet another hugely attended Waste Management Phoenix Open this week.

How huge? In the first five days of tourney week, attendance reached 286,605 – and that was before the weekend rounds even started. With Saturday annually outperforming all other days before a comparative lull on Super Bowl Sunday, that number could reach a half-million by the end of the week.

Though the PGA Tour doesn’t publish attendance figures from other events, it can be presumed that the WMPO final number is two, three or even five times larger than those of every other PGA Tour-sanctioned tourney on the schedule.

Granted, success isn’t determined by attendance figures alone – most tourneys likely don’t have the infrastructure to handle 500,000 spectators even if that was a possibility – but there aren’t many tournament directors who would turn down increased support for their events.

And that’s exactly what this one has become. Not just a tournament, but an event. The famed 16th hole has gained notoriety for playing host to as many as 20,000 fans at any given time, earning a reputation as the most raucous party in golf.

Well, on-course party, at least. After hours, the carnival heads across the street to a temporary nightclub known as the Birds Nest, where artists such as Will.I.Am and the Goo Goo Dolls performed this past week. It’s not exactly your mashie, niblick and balata crowd.

Former champion Kenny Perry often tells a story about meeting a local hairdresser and asking if she attends the festivities. 'Oh, we love the Phoenix Open,” she exclaimed. “We go every night!' Perry had to explain that there’s actually a golf aspect to the week, too.

That doesn’t mean other events’ thinktanks must propose on-course drinktanks. The Waste Management Phoenix Open is often known as Wasted Management – hey, there are even T-shirts employing the phrase – but fellow tournaments can simply use this one as a blueprint for garnering more attention.

“I wouldn't characterize it in terms of the number of fans, but certainly the integration of the communication with the tournament that results in a robust marketing of the tournament, absolutely,” PGA Tour commissioner Tim Finchem said this week. “The result of that is a higher percentage of businesses in each of those communities get involved in the tournament. Businesses buy packages, packages have tickets, tickets get distributed, crowds are enhanced as well as financial support.

“Those are models that we share with and work with other tournaments on.  Every market is different, by the way, in that regard.  But yeah, over the last five years we've made a concentrated effort to grow that integration.  … To see the kind of robust sales that are incurred here is an indication of what can happen with hard work and the right people doing the right things, so it is a very good model.”

This tournament may not be everything that’s right with golf, but it is bringing more people to the game – even if they’re viewing it through beer goggles.

It shouldn’t stop with this local community, either. There’s no reason officials from other PGA Tour stops can’t employ similar tactics in order to truly turn their tournaments into events.

Again, it doesn’t necessarily mean that others must adopt the same raucous personality as the WMPO. Ask the professionals and some love the disposition of this event, some hate it and the majority think it’s fine for one tournament per year.

That said, creative strategies can be used to bring more interest to other individual communities. The more people through the front gates, the more people becoming interested in the game, the more the game grows.