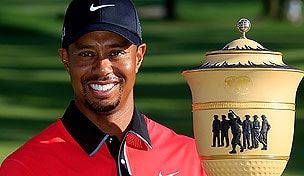 Getty Images
PALM HARBOR, FL - MARCH 19: D.J. Trahan hits a shot on the 3rd hole during the first round of the Transitions Championship at the Innisbrook Resort and Golf Club on March 19, 2009 in Palm Harbor, Florida. (Photo by Sam Greenwood/Getty Images)  -

AKRON, Ohio – He finally did it. What once seemed like an inevitable journey had stalled in recent years, but came to fruition here at Firestone Country Club on an historic Sunday afternoon.

Despite his girlfriend Lindsey Vonn’s post-round tweet saying, “So proud!!!! #79 #GOAT” there are plenty of observers who believe that as long as Woods still hasn’t passed Jack Nicklaus’ record 18 major championship titles, he won’t hold the title of Greatest Of All Time.

And for good reason.

The opinion is inarguable considering even Woods places himself on that side of the debate. It’s exactly why he wants so desperately to break the record. So that he can be considered the greatest. It’s impossible to argue in favor of a guy who doesn’t argue in favor of himself.

Winning the most majors should come affixed with the title of Greatest Of All Time. It makes sense. The player who wins the most at the ones that mean the most deserves to hold that honor.

That doesn’t mean there aren’t plenty of other superlatives which should belong to Tiger.

He is the Most Commanding Of All Time. Tiger’s record when holding at least a share of the 54-hole lead at a major is the stuff of legend. He is 14 for 15, the only misstep coming at the 2009 PGA Championship.

The rest of his closing numbers easily resemble those. Woods is now 53 for 57 in that position on the PGA Tour; he is 42 for 44 when holding the outright 54-hole lead.

Such numbers aren’t available for legends of previous generations, but know this: They weren’t close to what Woods has compiled.

This week’s WGC-Bridgestone Invitational proved it yet again. Woods posted a second-round 61 to claim a seven-shot lead entering the weekend. He still led by seven after the third round and won by seven when it was all over.

That’s prevent defense at its best.

“I thought that if I just handled my business and just made a bunch of pars and sprinkled in a few birdies here and there, I had an opportunity [to] not drop any shots,” he said of the final-round 70 that served as a veritable snoozer. “The only shot I dropped was when I three-putted; I blew a putt past and missed it. But overall it was a solid day. I played well and played conservative but also played very aggressive to my spots.”

No other player in history has alternately been able to step on the gas pedal and then slam on the brakes.

He is the Most Consistent Of All Time. No, not in the sense of a guy who casually hits every fairway and green. And not in the way that he claims top-10 finishes every week.

We’re talking big picture here. Woods’ consistency comes in his victories – both how many and how frequently.

His win on Sunday was his fifth this season. It marks the 10th time in his career that he’s won as many in a single year, two more than anyone else in the history of the game.

“I don't know what that total is, eight or nine,” he guessed. “Ten? That's even better. That's something I'm very proud of is how many tournaments I've been able to win consistently, year in and year out.”

He is the Most Dominant Of All Time. In case you think your eyes may have deceived you these past two decades, there are some eye-popping statistics to point this out.

My personal favorite? Woods now owns 79 career PGA Tour titles at the age of 37 years, seven months. He remains three behind Sam Snead for the all-time mark, but Slammin’ Sam didn’t capture his 79th until he was 47 years, 10 months.

That means Tiger could go winless from now until October 2023 – and he’d still be on a record-setting pace.

Here’s another one: Granted, the WGC events don’t hold the weightiness of majors. But they do feature a collection of the world’s best players a few times each year.

Woods’ 18 victories are more than every other player in the current top 50 on the Official World Golf Ranking. Combined. Put ‘em all together and Nos. 2 through 50 have a total of 17.

The 18 that Woods claimed on Sunday shouldn’t compare with the 18 he’s spent an entire career trying to reach. Not even close.

His latest win, though, should remind us that even though Woods hasn’t claimed the title of Greatest Of All Time, he still owns some pretty lofty superlatives when it comes to the history of the game.