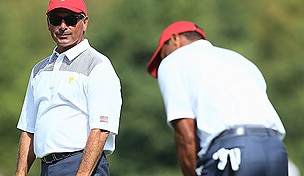 Getty Images
MEDINAH, IL - SEPTEMBER 27: Keegan Bradley of the USA with his partner Jillian Stacey during the Opening Ceremony for the 39th Ryder Cup at Medinah Country Club on September 27, 2012 in Medinah, Illinois. (Photo by Ross Kinnaird/Getty Images)  -

DUBLIN, Ohio – It all started with Mark O’Meara on an autumn morning in Sotogrande, Spain.

That’s when a 21-year-old Tiger Woods teamed with his older buddy to defeat Colin Montgomerie and Bernhard Langer in his first career match in a professional team competition. They played together twice more that week – both losses – before the young Masters champion was shuttled over to Justin Leonard, with whom he earned a half-point.

One year later at the Presidents Cup, Woods paired with Fred Couples (win), Leonard (loss), Couples again (loss) and – in one of the more forgettable partnerships of his career – John Huston (loss).

If you’re scoring at home, that’s four partners in his first two team events. And it didn’t end there.

Since then, Woods has played with …

Whew. A guy can bust a few brain cells just trying to remember ‘em all.

“I've had all different types of partners,” Woods says with a knowing smile.

The grand total? Eighteen different partners – and he might be about to add to that total this week.

On the eve of this year’s edition of the Presidents Cup, captain Fred Couples has intimated that Woods may be paired with Matt Kuchar or Jason Dufner – or both – in addition to Stricker, who at this point is practically Ol’ Reliable on that aforementioned list.

“Everyone wants to play with Tiger. You can only get one partner,” said Couples, now in his third tour of duty leading the team. “I can't tell someone who to play with.”

Actually, that’s exactly what he can do. But that’s another story for another column.

With the exception of Hal Sutton’s ill-fated decision to pair him with Mickelson back at the 2004 Ryder Cup, most of the other 17 partners have been preapproved by Woods.

Seven of his partners never got a second chance to play alongside him again.

Freddie has never been much of a rock-the-boat kind of guy, so don’t expect anything out of the ordinary here at Muirfield Village.

But the question does remain: Why has it been so difficult for Woods to find a symbiotic partnership?

Some will argue that his inability to find a regular partner speaks to his competitive nature. Others might maintain that his rather mundane 26-23-2 record is a result of his individual outlook.

Really, it’s just the nature of the beast. In the history of these events, nobody has competed for close to two full decades and barely switched it up, let alone never at all.

Like all stories of this nature, though, this one is magnified because of Woods’ magnitude.

And he has less of an explanation for the turnover rate than anyone else.

“I think it's just a matter of trying to gel that particular week,” he says. “Sometimes we do, sometimes we don't. But the whole idea is to go out there and just play.”

Jack Nicklaus, who on four occasions served as Presidents Cup captain on a team with Woods as a member, owned a similar attitude to Couples. Which is to say, when it came to making pairings, he was the ultimate in laissez-faire.

Really, there is no right or wrong answer here. (OK, so there may have been a wrong answer when Sutton was at the helm.) Woods might pair with Stricker this week, a teammate he’s had success with in the past, and flail miserably. He might play with Kuchar or Dufner, each a newbie for the list, and find a winning combination.

Woods himself doesn’t know the secret formula to finding a partner for these competitions. What he does know, though, is that he’d like one who can light up a leaderboard.

“Whoever is playing well,” he smiles when asked that question. “Whoever can carry me is great.”