Woods, Mickelson paired in final round at Pebble 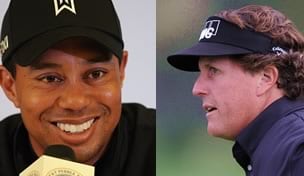 PEBBLE BEACH, Calif. – They’ve been classified as rivals, but it’s a conflict that has never fully developed. They’ve been called enemies, but have been known to sneak a laugh together during rare carefree occasions.

Then again, Tiger Woods and Phil Mickelson will never be confused for each other, either. Their personalities couldn’t be any more dissimilar; their accomplishments hardly mirror one another.

Woods is a steely-eyed, no-nonsense competitor attempting to re-ignite a career that was once presumed to result in breaking every major record. Mickelson is an ebullient, risk-taking daredevil trying to prove his relevance in  game skewing younger every day.

They are two men on divergent paths, two men whose journeys will converge at the AT&T Pebble Beach National Pro-Am on Sunday, as the one-named stars known worldwide as simply Tiger and Phil will compete together against the backdrop of one of golf’s greatest stages.

Entering the final round, Woods is four strokes behind leader Charlie Wi and Mickelson is one shot further back.

Despite their numerous differences, each player finds himself in a precarious and unfamiliar position. With 110 career PGA Tour wins between them – 71 for Woods; 39 for Mickelson – there has perhaps never been a time when both men needed a victory as much as they do right now. Tiger is suffering through the longest winless streak of his professional life at 22 straight, while Phil is just 1-for-37 since the 2010 Masters, his lone victory coming at last year’s Shell Houston Open.

It’s been well chronicled that Woods hasn’t won an official title since the Australian Masters in November 2009, though he did claim the unofficial Chevron World Challenge two months ago. His career may not be at a crossroads, but it has undoubtedly just made the turn and is heading off the back nine.

With third-place finishes at the Australian Open and Abu Dhabi Golf Championship sandwiching that unofficial win, he’s shown his game is back to respectability, but that only leads to a more imposing question: Does he still have what it takes to prevail when he gets into contention?

“A win is a win,” he said after posting a third-round 67. “I've won my share of events and it feels good. That's the ultimate goal and that's what we set out to do at the beginning of every event is to win it. That's the goal tomorrow, as well.”

Ironically, if there is one player who best understands the internal pressure to succeed that Woods currently feels, it’s his Sunday playing partner.

At 41, Mickelson has already started hearing the doubts as to whether he will ever win again. For so many years, he played second fiddle to Woods atop the game’s upper crust of elite players, but that’s so often been viewed as a negative rather than a positive.

Therein lies the fact that the importance of this final round is twofold for the mercurial lefthander. Not only is it important for him to prove that he remains one of the game’s most talented players, but there has to be a little extra desire knowing that he could leapfrog his longtime nemesis in search of his 40th career title.

“It feels great,” he exclaimed. “ Now, I know that I'm quite a few shots back … but I also know that this golf course, you can come out and get a quick start, make some birdies and when that happens, it's tough to follow suit a few groups behind. So I'm in a nice situation where if I can get a hot hand early, I can make a run on the leaderboard.”

This will hardly be the first time they have squared off head-to-head. Woods and Mickelson have faced each other on 28 previous official occasions, with Tiger posting the lower score 13 times, Phil besting him 11 times and four ties. (Mickelson also outplayed his opponent at the unofficial WGC-HSBC Champions in 2009.) If that number seems too skewed toward the median, consider that in their eight career final-round matchups, Mickelson owns a 4-3-1 scoring advantage.

Other occasions have held more importance, of course. The third round of the 1999 U.S. Open, when each positioned himself for Sunday contention. The final round of the 2001 Masters, when Woods edged Mickelson by two strokes to claim the green jacket and the so-called Tiger Slam. Again at the Masters eight years laster, when each grabbed a share of the lead at one point, only to falter down the stretch.

Never before, though, has each one needed to taste victory like he does now. Both have made a career out of flashing a wide grin while clutching a shiny trophy as the cameras roll, but such situations haven’t occurred recently for either.

On Sunday, they will each have a chance to win again. It’s only fitting that they will make that journey together.