Woods six back after 36 holes in AT&T 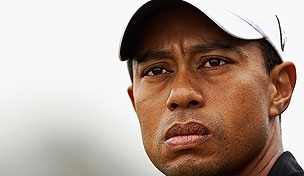 PEBBLE BEACH, Calif. – Stop me if you’ve heard this one before.

I know what you’re thinking.

Maybe it was a recurrence of last year’s knee injury that kept him out of action for three full months. Perhaps it was the Achilles problem that doesn’t get as much pub, but has impaired his progress over the years. Or it could have been – gasp! – a tweak of the very same ACL that he had repaired after winning the U.S. Open four years ago.

Nope. In those three instances, you’d be wrong, wrong and wrong.

Instead, it was his right wrist that was injured during the second round of the AT&T Pebble Beach National Pro-Am – and when Tiger first addressed it after his round, it sounded pretty serious.

Uh-oh. Could this be another in a long line of injury issues for Woods? Could this inhibit his ability to play what he says will be his first 20-start season since 2005? Could this be something that plagues him throughout the remainder of his career, adding to the list of aches and pains that keep him from passing the game’s most hallowed records?

“Once I popped it back in, it was good,” he explained. “It was just a joint. No big deal.”

Oh, right. No big deal. Just a joint. All he had to do was pop it back in.

Just another day at the office, huh?

It may sound like Woods should make the All-Madden Team for his tough-guy performance at Monterey Peninsula Country Club, but listen to him and the quick fix seems like the most normal thing in the world.

The incident in question occurred on the par-4 eighth hole. Woods’ drive landed in a fairway divot and from there, he was forced to hit down on the ball with a little more power. He found the green with his shot and two-putted for par, but not without hurting his wrist – for a few minutes, at least.

That was about all that went wrong for him Friday.

Playing his first competitive round as a professional at MPCC, Woods carded four birdies and two bogeys, resulting in a 2-under 68. It was hardly the best score his game could have elicited, but following an opening 4-under 68 at Spyglass Hill, it brought him to 6 under at the midway point of the tournament, six shots off the lead of Charlie Wi and in a share of 17th place on the leaderboard.

“I hit it well, I just didn't give myself the exact right looks today,” said Woods, who’s hit 83.3 percent of greens in regulation in the first two rounds. “I was above the hole or had some downhill breaking putts. I just needed to leave myself below the hole. With the greens getting bumpy like this, you just have to be aggressive on these things and take out some of the movement, and I just didn't do that.”

Woods may not have sounded too enthused about his ball-striking, but to borrow a few of his favorite phrases, his tee shots have often been “on a string” and his iron play has appeared “dialed in.” At MPCC, he hit 11 of 13 fairways and 16 of 18 greens in regulation, improving on his numbers from one day earlier at Spyglass.

His bigger issues have come on the greens. Woods endured four second-round misses of about 10 feet or less, but somewhat surprisingly characterized his putting afterward as “good.”

If that was “good,” just think what could happen if “great” returns to his arsenal for Saturday’s third round at Pebble Beach.

Woods has enjoyed a love-hate relationship with the admittedly bumpy greens on the famed links over the years, but he’ll have the benefit of playing in the third group off the 10th tee, likely meaning smoother greens than later in the day.

He doesn’t need to go extremely low in order to remain in contention entering the final round, but Woods should bring some optimism into the day, considering the way he’s hit the ball and the fact that a potentially serious situation with his wrist was a mere quick inconvenience.

For one of the only times in recent memory, no matter what happens over the weekend, we can still say of Woods: Hey, at least he has his health.