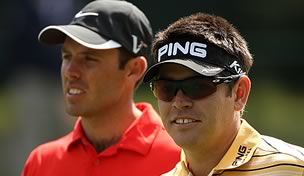 BETHESDA, Md. – The year was 1994. Ernie Els was in the midst of cementing his legacy as a South African hero, earning his first career U.S. Open victory at the tender age of 24.

Halfway around the world, his countrymen burst with pride. They celebrated the victory, reveling in the success of their nation’s greatest golfer since Gary Player was swashbuckling his way to history.

A pair of young boys – grown men now – recall watching the victory, but have a more indelible golf memory from that time in their lives.

Louis Oosthuizen was 12 years old and already a budding young superstar on the South African junior circuit. Charl Schwartzel was nearly two full years younger, already in awe of the kid he now remembers as “the great Oosthuizen.”

Serendipity paired them together in the stroke-play portion of the S.A. Boys junior championship. Well, serendipity and an open tee time.

Schwartzel was scheduled to commence his round on the 10th tee at Randpark Golf Club in Johannesburg, but his playing partner failed to show. So he found Oosthuizen, already two hours early for his original tee time, and asked if he’d like to join him for the day.

“I remember it like yesterday,” Schwartzel recalls. “Louis was an established junior golfer. He was quite a lot better than I was. I was obviously very young.

“I got really nervous. I mean Louis is like …” – and with this, he emphatically arches his eyebrows and spreads his hands – “… Louis! You've got to be joking! And that's where we met.”

Despite his innate talent, Oosthuizen didn’t make much of an impression on his younger competitor.

“I'll never forget,” Schwartzel says, “I think he three-putted the first hole and he had quite a temper on him; he really got cross. And I was very surprised. I looked at my dad and I was like, ‘Do you see that?’”

“I had a very bad temper, I remember that,” Oosthuizen explains. “I hated it when I didn't make any putts. And he always tells me his dad said, ‘Wow, this kid has a bad temper. He's bad news.’ So it was always like that.”

It may not sound like the start of a beautiful friendship, but throughout the years Schwartzel and Oosthuizen blossomed and matured as golfers together. Each born the son of a farmer, they understood the concept of hard work and didn’t mind applying it to their games.

They were among the first recipients of the Ernie Els Foundation, an organization dedicated to identifying and growing South Africa’s best junior golfers. And grow they did, eventually turning professional, each winning tournaments around the globe at the highest levels.

Anyone in attendance for that initial meeting at Randpark – and chances are Charl’s father, George, was the only one – could see the boys had some skill, but no one could have predicted that less than two decades later these two best friends would own two of the game’s most prestigious championships.

Oosthuizen would claim the claret jug in historic fashion, winning by seven strokes at St. Andrews at 27 years old. Nine months later, Schwartzel would counter by earning a green jacket, posting birdies on his final four holes at Augusta National to become a Masters champion at the age of 26.

“It's just great to have a friend like him on Tour and to have the same success,” Oosthuizen says. “I think the two of us feed off each other quite a lot. If he plays well, I want to play well. And if I play well, he wants to, as well. It's good. It's really good what we have going for us.”

This week they both come to Congressional Country Club as underdogs for yet another major championship, overlooked winners despite prevailing in momentous fashion.

Nor should it be overlooked that the man who won the last U.S. Open on this course had a major hand in the development of his fellow South Africans – whether he admits it or not.

“Obviously I had a bit of a hand in Louis and Charl, but they were born with the talent,” Els contends. “They had the drive, inner drive within themselves. Even without our help, I'm sure they would have made it to where they are today.”

Two unassuming farmboys, quickly ascending to the ranks of the world’s best, making history on the game’s grandest stages.

And to think: It all started that one day some 17 years ago.

“We've sat back and just said, ‘You know, you actually see what we've done, where we came from’” Schwartzel says. “We are very proud of it.”