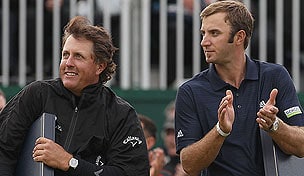 SANDWICH, England – Phil Mickelson and the Open Championship normally go together like chocolate brownies and lemonade. Yet there he was Sunday at Royal St. George’s, with a renewed attitude toward links golf, draining putts like we’ve rarely seen in major championship history.

Dustin Johnson’s game seemed more suited to win the U.S. Open or the PGA Championship. Yet there he was in contention to win the game’s oldest major, making this the third time in the last six major championships that Johnson had victory within grasp.

Mickelson drew even and Johnson stood within a shot of Darren Clarke at different points in the final round of the Open Championship. The stars and stripes had an opportunity to stop all the talk of major American drought. It had two of its most dynamic players, in contention with nine holes remaining, trying to beat a 42-year-old man from Northern Ireland who had attempted to capture the claret jug 19 previous times.

Turns out, Uncle Sam is leaving England empty-handed. A country of 1.8 million people has won three major tilts since the last time the U.S. – a country of more than 300 million people – has won one. The last time an American won a major was Mickelson’s emotional victory at the 2009 Masters.

If you bleed red, white and blue this one should hurt as much as any.

Mickelson entered the final round five shots behind Clarke and was considered a long shot to make a charge. He had talked all week about how he wanted to erase the memories of Opens past and treat this week like it was his first.

The approach was, as they say here in southwest England “proper.” Mickelson took his swashbuckling style through nasty weather and posted a front-nine 5-under 30 – that included an eagle at No. 7 – to get within two. A birdie at 10 turned Royal St. George’s upside down because the four-time major championship had somehow maneuvered to within one.

The unraveling began when he missed a 2-footer for par on the 11th hole. From there, Mickelson was never the same.

“There was nothing to it,” Mickelson said. “It was just a dumb mental error. I just lost focus there, and it hurts to throw shots away like that when I’m behind.”

Bogeys followed at 13, 15 and 16 and what looked like a potential Mickelson victory, turned into a challenge to finish second. That’s Lefty in a nutshell, entertaining to the bitter end.

“The putter let him down all week,” said Butch Harmon, oddly enough, swing coach for both Mickelson and Johnson. “He made a few, then down the stretch it just went away.”

Ultimately, this won’t be remembered for being as big as Bunkergate at last year’s PGA Championship at Whistling Straits. It won’t even be in the same ballpark as the meltdown last summer at the U.S. Open at Pebble Beach. But Johnson threw away a chance at winning the Open Championship on the par-5 14th hole.

Standing in the middle of the fairway, Johnson hit his 2-iron second shot way right, sailing out of bounds. It was the first week all year that Johnson has carried a 2-iron.

Johnson had made birdie on No. 12 to get within two of the lead and birdie on No. 14 – the only true birdie hole remaining in the round – would’ve put immense pressure squarely on Clarke’s broad shoulders. But Johnson pressed and tried to hit a low runner up the fairway in hopes of it rolling onto the green.

“Out here you don’t really get too many opportunities to make birdie so it was definitely a go situation,” Johnson said. “If I had to do it over again I’d hit a 3-wood instead.”

Sure, there was a stiff wind, but that shot was unacceptable, especially when you’re playing alongside Clarke, the guy you’re trying to beat. It was essentially a match-play situation and Johnson blinked first.

“It’s a tough shot,” Harmon said. “You’re trying to chase a low hot iron up there and bounce it up on the front of the green and you just don’t pull it off. He’s trying to win.”

These are the opportunities that Americans must seize. A country the size of Nebraska is dominating professional golf. If three people from the Cornhusker state won three of the last six major championships, it’d be one of the biggest sports stories in the U.S.

Instead, one of the biggest stories in golf is that, in Tiger Woods’ absence, Americans cannot find a way to succeed in the game’s grandest stages.

Most players – from both the U.S. and internationally – say that it’s just cyclical, that the U.S. has been dominant before and will be again. That’s true. But, like Woods himself in pursuit of Jack Nicklaus’ major championship record, the longer you go without capturing the next major, the more difficult the quest becomes.

“You can’t go back and replay it,” Harmon said. “You have to take a positive from this.”

Perhaps. But Mickelson and Johnson both had prime opportunities to capture major glory and tied for second place, three shots behind Clarke, who bogeyed the last two holes. Before the week began neither man was on the radar, but they ended the week there and faltered. Meanwhile Northern Ireland walked way with another major championship.

The more things change, the more they stay the same.