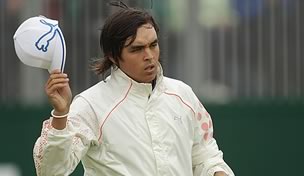 SANDWICH, England – It was almost as if Rickie Fowler didn’t even notice it was raining.

With torrential rains that would make Noah’s Ark seem like it was out for an afternoon excursion and with more scores in the 80s than there were the 60s, Fowler slashed and dashed his way around Royal St. George’s with a swagger that brought back memories of a young Seve Ballesteros.

Kids these days. Four weeks after a 22-year-old won the U.S. Open in record fashion to capture his first major, another 22-year-old is in contention to win the Open Championship for his first-ever pro victory.

Fowler, wearing white raingear with pink polka dots and a white hat with a royal blue Puma logo, made four birdies and two bogeys to shoot 2-under 68 on a day many here at this hallowed championship called the worst they’ve ever seen.

Meanwhile, it seemed like Fowler got a thrill out of trying to tame the beast not many others could. Most were trying to survive. Fowler seemed to thrive.

“I had quite a bit of fun out there today,” Fowler said. “You have to kind of embrace where you’re at and what’s in front of you.”

A bogey came first for Fowler on the second hole and it looked like he would meet the same fate as the rest of the field. But he righted the ship with birdie on the fifth hole and made birdies on Nos. 13, 15 and 16 coming in to move rapidly up the leaderboard and end in a tie for third place, only three shots behind leader Darren Clarke.

As miserable of a day as it was, Fowler never looked out of control.

“He’s such a natural player and he’s got a lot of feel, so he controls his ball flight very well,” playing partner Rory McIlroy said. “He’s got a great short game. He gets it up and down when he needs to, holes good putts at the right times. Very impressive.”

There is a feeling that the U.S. so badly wants a youngster to cheer for in Tiger Woods’ absence. With McIlroy winning the U.S. Open, that feeling has grown even stronger. Europeans feel that the game in their land is safe in McIlroy’s hands. Americans want someone young to feel good about, someone who says the right thing, does the right thing.

By most accounts, Fowler is that person. But the victories have to come, preferably on the game’s grandest stages.

What happens Sunday is anyone’s guess. There is evidence to prove that Fowler has the fortitude to deal with the pressure that comes with contending at a major. There also is plenty evidence to the contrary.

Two weeks ago at the AT&T National, Fowler was in the final grouping on Sunday, tied for the lead and made double bogey on the second hole. That got him out of sorts – “wobbly” as they say here in England – and he shot 74 to finish eight shots behind winner Nick Watney.

There were several questionable decisions for Fowler last year. At the Phoenix Open Fowler opted to layup on the par-5 15th hole in the final round when his two playing partners went for the green – successfully – in two shots. Both made birdie, while Fowler made par and finished a shot off the lead. He also shot a final-round 73 at the 2010 Memorial while in contention and made a costly double bogey late.

“I think all those experiences we’ll build upon,” Fowler’s caddie Joe Skovron said.

For every poor decision or lackluster final-round performance there have been glimmers of greatness.

None greater than at the Ryder Cup last year in Wales when Fowler found himself 4 down to Edoardo Molinari after 12 holes in singles matches. He made birdie on each of the final four holes to grind out a much-needed half point for the red, white and blue.

At the WGC-Accenture Match Play this year Fowler stomped Phil Mickelson in the second round to the tune of 6 and 5. It was a performance that made Mickelson say, “he means a lot to American golf.”

Maybe it has just taken Fowler a little longer to figure out this winning thing. He is, after all, only 22. It doesn’t help Fowler that McIlroy has made winning look easy. The young lad from Northern Ireland has won three times, including a major, and is the same age as Fowler. Matteo Manassero, at age 18, has won twice on the European Tour.

Fowler’s day will come, that’s a sure bet. The question is when.

“I’d love for my first win to be a major and I’d love for it to be here,” Fowler said. “We just have to do the best that we can tomorrow and see where that puts us.”

Or he could throw all that out and window and do what he did Saturday – play like no one was watching.