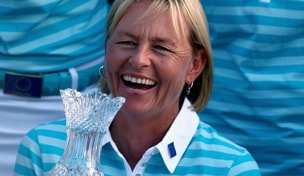 Getty Images
Ryan Moore drives on the 12th hole during the third round of the Barclays Classic at Westchester CC in Rye, New York on June 25, 2005Photo by Michael Cohen/WireImage.com  -

PARKER, Colo. – Annika Sorenstam had loads of time on her hands Wednesday afternoon.

You’d think, as a vice captain of the European Solheim Cup team, she’d be running around putting out more fires than Smokey the Bear.

That, however, was not the case on this steamy afternoon at Colorado Golf Club.

“Lotta, she’s driving the ship,” Sorenstam said. “Everybody’s at ease. It’s very peaceful. We don’t feel stressed. She has this calmness about her.”

Lotta, of course, is Liselotte Neumann, Europe’s unflappable captain whom Sorenstam idolized while growing up in Sweden. When Neumann won the 1988 U.S. Women’s Open it made Sorenstam realize that she wanted to make a living playing golf.

That decision turned out well.

Aside from Sorenstam’s 72 LPGA victories and 10 major championships, she played in eight Solheim Cups. This is her second turn as a vice captain, following a stint in 2011.

So when Sorenstam says that this is the most prepared she’s ever seen a team the day before the event, it speaks volumes. She knows what she’s talking about. She wouldn’t sing such praises unless they were overwhelmingly true.

Since everything Neumann did before the Solheim Cup went according to plan, why should we be surprised that her thoughtful methods have worked during the matches, when they mattered most?

Neumann knows what she’s doing and has the conviction the stick to her plan. She was mildly criticized for not selecting Sandra Gal as one of her four captain’s selections. Instead she went with Caroline Hedwall, Guilia Sergas, Jodi Ewart Shadoff and 17-year-old Charley Hull.

Those four have gone a combined 6-3 the past two days and Hedwall has dominated with a 4-0 record of her own.

It was three of the four captain’s picks that helped Europe dominate the Americans, 4-0, Saturday afternoon in fourballs. The lineup was a gutsy strategy, but it was a move that had Neumann’s signature stamped all over it.

Heading into the crucial session, Neumann opted to rest Solheim Cup dynamos Suzann Pettersen, Anna Nordqvist and Catriona Matthew, who have played in a combined 17 Solheim Cups. Many believed Neumann should’ve trotted out her top players in an attempt to earn as many points as possible. Instead, she has a rested lineup and a nearly insurmountable five-point lead.

But Neumann went with a lineup of eight players who had played in only a combined 11 Solheim Cups, all playing in either her first or second cup. Meanwhile, Americans had match-play wizards like Cristie Kerr, Paula Creamer and Morgan Pressel in the lineup.

“I think we did a pretty gutsy thing today, resting some of the girls,” Neumann said. “Because I knew how important the singles were going to be tomorrow. Sitting out Catriona and Anna and Suzann, and I knew they really needed to be rested for the singles.

“But to think these girls were just going to step up to the plate like this and take all the matches in the afternoon? It’s unbelievable.”

Two of Europe's six rookies – Ewart Shadoff and Hull – led the way in the first match of the afternoon against Creamer and Lexi Thompson. The match was close all day but it was Hull who made the biggest impact.

Standing on the par-3, 17th tee, Thompson had already hit her tee shot to 5 feet, so Hull went directly at the hole and the ball ended 4 feet away. Thompson missed her birdie attempt, Hull made hers and took a 1-up advantage into the home hole, where they ultimately won the match.

“It was a very surreal experience, actually,” Hull said. “Two rookies together, nobody expects us to win, but we played so well, we really did.”

Neumann may be the only person on the planet who did believe her fresh-faced rookies had a chance to win, saying “I just had a feeling about them.”

“It’s been an honor to have her as a captain,” Beatriz Recari said. “I will never forget my – this first Solheim Cup for me, with her as a captain. She’s been so kind and encouraging.”

Said Ewart Shadoff: “She’s so laid back, nothing seems to phase her. We’re all similar too. We’re reserved players for the most part.”

Cool in Colorado seems to be paying off nicely.