Woods fails again to come back and win a major 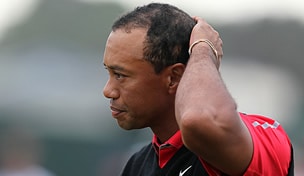 GULLANE, Scotland – Tiger Woods knows it. You know it. I know it.

We all know it as well as we know how many major championships are sitting on Woods’ mantel.

So why hasn’t Woods been able to do anything about it? Why hasn’t the game’s most dominant champion ever been able to come from behind to win a major championship?

Woods has as many majors as I have when trailing after 54 holes.

It all sounds so harsh, but how can this be possible?

Phil Mickelson has come from behind to win two majors. Ernie Els has, too.

Woods shot a final-round 74 Sunday at the 142nd Open Championship to tie for sixth place in what was easily his best chance to capture a major since the 2009 PGA Championship, which, coincidentally, was the only time Woods has ever coughed up a 54-hole lead in a major. He’s now gone 17 majors without a victory and, if he fails to win the PGA Championship next month at Oak Hill it’ll be five full calendar years without a major.

“I've won 14 and in that spell where I haven't won since Torrey, I've been in there,” Woods said Sunday at Muirfield. “It's not like I've lost my card and not playing out here. So I've won some tournaments in that stretch and I've been in probably about half the majors on the back nine on Sunday with a chance to win during that stretch. I just haven't done it yet.”

Woods is now 25 over par in his last seven major weekends, dating back to the 2012 Masters. During that span he has three top-six finishes.

Some of those majors just weren’t meant to be – the Masters and U.S. Open last year and this year’s U.S. Open at Merion immediately spring to mind. Woods wasn’t playing particularly well the first two rounds so poor weekend play was not unexpected.

The performance here the past two days, however, is mind-boggling.

Emphatically, Woods should’ve won this championship. It was set up perfectly for him. He was able to play to his strengths, hitting driver only twice – and he still couldn’t get it done.

Every player in the field has shots he’d like to play over, things he wished he’d have done differently. Woods missed two 3-footers on Friday and shot even par, hit all but two fairways on Saturday and shot 1 over par, then looked out of sorts Sunday during the final round when he made a three-putt bogey on the opening hole.

Woods, as he’s done every time he’s played poorly this year, said he couldn’t get a feel for the speed of the greens, said they were much slower than they had been the previous three days. He had difficulty getting the ball to the hole numerous times.

After the bogey on the first hole, Woods made five more bogeys and, at times during the round, looked disinterested and unengaged.

This was a big moment, one it would seem Woods would relish. He was paired with Adam Scott (and subsequently Scott’s caddie, Steve Williams) in the penultimate group at a place that has a propensity for allowing Hall of Fame members to be victorious, yet Woods still couldn’t muster the magic.

While Woods was trudging along with bogeys at Nos. 10 and 11, his longtime rival Mickelson began to catch fire. At one point, before Mickelson made birdie on the last two holes, Woods was only three shots out of the lead. Here, three shots is nothing. But Woods made bogey on the 15th hole when he blew his birdie attempt 10 feet past the hole and missed the comebacker for par.

“I'm very pleased with the way I'm playing, there's no doubt,” Woods said. “I'm right there and I hit a ton of good shots this week.”

Many untimely shots, too.

Think about it for a moment. To come from behind to win a major means he’d have to find lightning in a bottle for 18 holes when he hadn’t been able to capture said lightning in the previous 54 holes. Makes perfect sense.

So we now turn our focus to the remainder of the season – the WGC-Bridgestone and the PGA Championship are the next two big events, then the FedEx Cup playoffs will follow.

Woods has still won four times this year and could pick up another PGA Tour Player of the Year trophy. But he has enough of those trophies, the ones that look good on the mantel if, say, you don’t already have 14 majors.

More now than ever before, the majors are the only tournaments that matter, the only notches that ultimately will slam the door shut on the greatest-player-ever conversation.

Woods has work to do.

It’s not wise to doubt Woods’ determination and ability, but with each passing major it becomes less likely that he’ll catch Nicklaus. Especially when he lets majors like this Open Championship slip from his grasp.

To win five more majors it’s likely that Woods is going to have to win one from behind. If he doesn’t, it’ll remain a talking point on Woods’ vast resume.