Age of Tiger: Woods has already run out of time 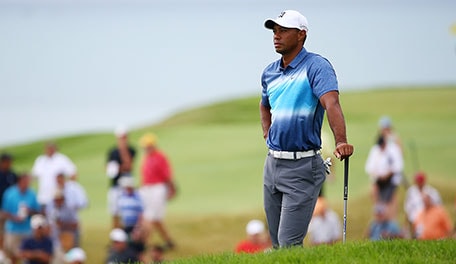 So, if you’re a Peanuts fan, you might remember that for a time Peppermint Patty believed that she was an angel put on earth to pass along one specific message. The message? “If a foul ball is hit behind third base, it’s the shortstop’s ball.”

I’ve often wondered, as many have I suppose: What is my message to the world?

And I think it’s this: Athletes always age faster than you think they do.

OK, it’s not exactly that kinetic energy equals mass times the speed of light squared or that brevity is the soul of wit or that Soylent Green is made from people, but it’s the best I’ve got. It just seems like people keep refusing to accept that athletes in all sports — every single one — fade so much more quickly than you would expect them to. This is particularly tough to accept in baseball and golf, two sports where there is little violence* and numerous examples of older players beating the odds.

(*Aside from an occasional John Daly club throw into the ocean.)

In baseball, the unwillingness to understand how quickly players decline has cost teams billions of dollars. GM’s will keep signing 30-somethings with the hope and expectation that they will perform more or less like they did in their younger days. This is baseball’s definition of insanity.

Three years ago, I asked this question: Which duo of baseball players would you rather have for the next five years, Albert Pujols and Josh Hamilton or Eric Hosmer and Salvador Perez? I emphasized the point by adding that money is no object: I was simply asking which would be the better duo for five years, Pujols and Hamilton or Hosmer and Perez.

The question seemed so stupid at the time that, well, you can read some of the comments if you want. At the time, there was so much buzz about the Angels acquiring the two former MVPs. Pujols had been the best player in baseball for a decade. Hamilton was thought by many to be pretty close to that level when healthy. Few knew who Hosmer and Perez even were.

Well, we’re only three years into the deal — the turn happened even faster than I thought it would:

Pujols and Hamilton: 11 WAR (wins above replacement), one All-Star appearance.

Hamilton has already been dumped. Pujols is having something of a renaissance season because he has 30 home runs, but it’s a facade: He’s now a defensive liability (after being a great defender), and his on-base percentage is down to .312 — he has basically become a one-dimensional homerun hitter. Meanwhile, Perez is probably the best catcher in the American League and Hosmer is coming into his own at age 25. If you asked the question now, the answer would be even more obvious than it was in 2012 — and it would be the opposite answer of 2012. Bet on youth. Always bet on youth.

This premise of aging fast is even more controversial in golf. I’ve written about this so many times that, yes, you’re undoubtedly sick of it. But the message just isn’t getting out there. Again and again, there are stories and analyses and comments asking what’s wrong with Tiger Woods? And people just refuse to accept that there’s nothing wrong with Tiger Woods. He’s 40 years old or will be in a few months. And this is what happens.

Most Majors through age 35:

Bobby Jones is obviously a tricky one because he actually won six U.S. and British amateur championships that were considered major in his day. But you get the point.

Most majors 36 and older:

You will notice only one player makes the Top 5 of both lists — Nicklaus. It is what sets him apart. But it goes beyond that. Now, let’s give you the first list again, but in parentheses I’ll show you how many majors those golfers won after age 35.

Other than Nicklaus, who reinvented himself after 35, these top golfers won a combined one major championship after they turned 35. Yes, they had different circumstances (Jones retired, for instance). But Byron Nelson never won one after 35. Seve Ballesteros never won won after 35. Lee Trevino and Nick Faldo won one each after 35. Of the greatest golfers, the only two who were great on both sides of the 35-year line are Nicklaus and Player. And Player is famous for being, essentially, unbreakable.

Woods’ real issue, when it comes to catching Nicklaus on the all-time majors list, isn’t what he’s doing now. He lost the race when he didn’t win a major championship in 2009, when he was 33, then after the scandal didn’t win majors at ages 34 and 35. That was when he physically could still win. He finished top six on six occasions then. He did have a real shot, at 36, to win the 2012 Open Championship at Royal Lytham — he entered the final day a shot ahead of eventual winner Ernie Els. But Els, who is six years older than Woods, shot 68 on the final day. Tiger shot 73, and that was that.

Though Woods has talked about how he has given himself many chances to win majors since then, he really has not. He made an illegal drop at the 2013 Masters and finished fourth (many thought he should have disqualified himself) and he entered the final day of the Open Championship that year just two shots back, but he never sparked on Sunday. Since then, he has missed more major championship cuts (four) than he has made (three).

The swing changes are the sign of a man whose body is breaking down – he can’t swing the club like he once did, and he keeps looking for remedies. Getting back to No. 1 in the world in 2013 was nice, but it was a paper title at best – you can’t truly be the best golfer in the world if you are not winning majors. Heck, Luke Donald and Lee Westwood have also been No. 1 in the world. And the short stretches where he looks like the young Tiger? Sure, they’ll keep happening. You know what? There are times still when Tom Watson looks like the young Tom Watson, and he’s turning 66 next month. It doesn’t last.

People keep wanting to make this about some mystical thing in the desperate belief that Woods will someday turn on a switch and become great again. Well, people have been looking for that switch since a guy named Juan Ponce de Leon. Woods can keep practicing, keep adjusting, keep searching for his feels, keep trying to find the bottom of his swing, keep working on his alignment and all that but in the end, he’s 40 now. This is who Tiger is now. People want to talk about how he has 10 more years of being competitive; it seems to me they’re just kidding themselves. Maybe with practice and a new focus and a shift in his thinking he might at some point become competitive again, and if he can become competitive again there’s a chance he can have a magical week or two. But even if that does happen – and the odds are against it happening – he will have to find a way to compete as an older golfer. This is not a new story. It’s the oldest story going.

It was sad watching Woods flounder at the Open Championship last month, and it was sad watching him stagger and stumble at the U.S. Open the month before that, but something felt different about his third consecutive major championship missed cut this week at the PGA Championship. This time, it felt a bit more ceremonial, somehow. Yes, he still cursed up a storm after bad shots, and he still looked frustrated, and his self-evaluations still seemed somewhat separated from reality. But he was introduced as the 1999, 2000, 2006 and 2007 PGA champion. Fans gave him a few standing ovations. There was a “let’s appreciate what Tiger Woods has meant to us” vibe.

And it reminds me of when I went to the eye doctor a few weeks ago. The doctor said, “Congratulations. You have hit bottom.”

He said: “Your eyes have now lost 100 percent of their ability to focus. That’s it. You have zero percent capacity for focus now. This is what happens when you get to be our age.”

I looked at him (or tried to – I can’t focus) and asked why he offered congratulations.