DJ built for majors; with one, more to come? 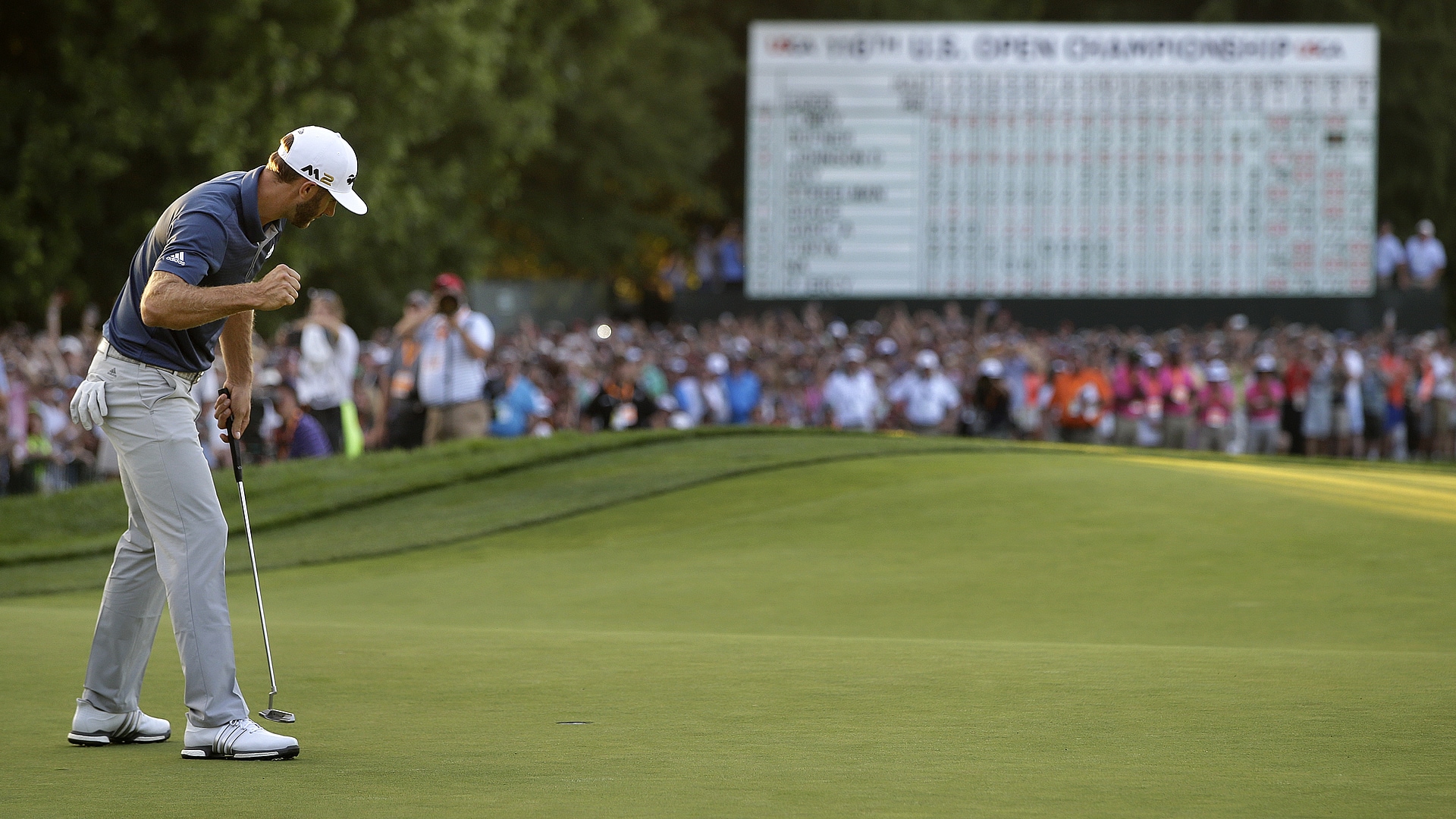 OAKMONT, Pa. – Dustin Johnson never did fit in with that group of players that fans so casually categorize as the “best to never win a major championship." That club has always felt a bit too much like golf's isle of Misfit Toys for him. You know: One guy is a magnificent grinder but he doesn't have quite enough firepower. Another can hit it pure but he lacks a little bit of the magic that you need around the greens. The third has enough game but he hesitates ever so slightly in the pivotal moment.

And all of them, if they are being honest with themselves, kind of know why they are here on the Island.

But Dustin Johnson, no, he never belonged here. DJ? Flawed? Are you kidding? This guy does not belong on some island with a bunch of very good players who just couldn’t quite win the big one. He belonged on the top of a mountain, and not just any mountain, Mount Olympus, the one with Hephaestus, the god of fire, and Nemesis, the goddess of revenge, and Dustinus, the god of "Great Zeus, did you see the way he smashed the Prometheus out of that golf that ball?”

DJ has everything. He has the 350-yard drives. He has the towering approach shots. He makes more birdies and eagles than just about anybody. I remember years ago getting fitted for clubs as part of a story, and the golf science-y guy there – the one that puts all the sensors on the body and measures every ounce of golfing talent you have – asked me to name the most talented player in the world. There was only one right answer, he said.

"Tiger Woods?" I asked. He shook his head no.

"Rory McIlroy?" I asked. He shook his head no.

And then he told me that Johnson's golfing talent is so overwhelming that it about blew up his sensors. No player had ever tested even close to him. "Dustin is the most talented golfer on earth," he said. "And nobody is in second place."

His swing is faster than a speeding bullet, more powerful than a locomotive; his shots leap tall buildings in a single bound and then drop softly on the other side, dance a little salsa dance and spin toward the cup like an obedient puppy. It isn’t just that he can make the game look easy. He makes it look too easy. Have you ever owned a standup video game, the sort they used to have in arcades back when there were arcades? Once, a few years ago, I bought an old Superman video game at a sale for around twenty-five bucks. I always wanted a video game. I got so good at it that I literally made it obsolete … I reached the end and there was nothing left.

That’s how DJ plays sometimes – like he has reached the end and there’s nothing left.

No, a guy like Dustin Johnson doesn’t belong on the Isle of Misfit Toys with the elf who wants to be a dentist or the Jack in the Box named Charlie or Sergio Garcia. This is a guy who can dunk a basketball, a guy engaged to Paulina, a guy who has the greatest hockey player ever just following him around tournaments. Snake-bit? This guy? Not a chance.

But, of course, you know: He was snake-bit. He couldn’t win that major for a long, long time. He kept winning on the PGA Tour. He kept putting himself in position to win majors. But something always broke down. What? Well, sometimes, a lot of the time, it fell apart because he couldn’t putt the ball in the hole. Putting has wrecked a lot of great players through the years.

Sometimes it fell apart because he was struggling with his personal life. He stepped away from the Tour for a while. There have always been rumors.

Sometimes – a lot of the time, actually – strange stuff just happened to him. He found himself in a bunker that didn’t look anything like a bunker. He found himself putting for a U.S. Open over greens the color and texture of sandpaper. And so on.

Sometimes, frankly, you just had no idea what was going on in his head. He seemed a bit dazed and confused. Johnson takes the Zen approach to golf, meaning he doesn’t want to think too much about it. He’s like the anti-Spieth. When people ask him questions that seem to complicate things, he just won’t go with them, as can be seen by this classic reporter-player exchange before Sunday’s round:

“Do you want (the conditions) to be as hard as it can possibly be?”

“Jason (Day) was just saying he wanted it to be really hard – is a hard golf course to the advantage of (the best players)?”

DJ: “I would imagine it’s going to be quite difficult Sunday.”

And sometimes, well, his inability to win the big one was sort of inexplicable. I watched Johnson so thoroughly obliterate the Old Course at St. Andrews in last year’s Open Championship that, honestly, it just seemed like everybody else would be saving time by just going home. He was 10 under par after the first two rounds and, with a little bit of luck, he could have been 20 under.

At Oakmont it seemed like it would be yet another fade-away chapter in Johnson’s weird career. In the first round, he obliterated the course. Analysts can’t help but compare players with Woods, and it normally isn’t fair to either the player or the the incomparable Woods.

But Johnson in the first round at Oakmont was a near-perfect parallel to Tiger, but not the dominant and complete Woods of the 2000s. DJ was like raw Tiger in 1997, the year he so thoroughly overpowered the Masters that the Augusta National people realized they would have to completely change the golf course.

Tiger wasn’t a great player yet. But he was powerful. You will remember at Augusta, he turned every par 5 into a par 4. He hit wedge shots into every green. It was laughable. And that’s how Johnson treated Oakmont. The people of Pittsburgh take great pride in Oakmont being the toughest golf course in America, in the world, and yet there was Johnson hitting easy wedges into every green and having decent birdie looks on most holes. It’s a good thing the USGA had the greens running at 200 on the stimp or Johnson might have shot 59.

Then the tournament went formless. A crazy rain storm sent everybody scrambling, golf rounds bled from one day into the next, the top players in the world faded from view. And somehow Johnson found himself four shots back going into Sunday and just hanging around with a couple of Isle of Misfit Toys frat brothers, Garcia and Lee Westwood. He still seemed to playing better than anyone else. But this had become a familiar story.

Sunday was one of the weirdest days in major championship history, of course, with bizarre rulings and non-rulings, with players charging and retreating in constantly dramatic fashion, and at no point until the very end did it seem like Johnson would win. But he did win, even if the USGA did its very best to obscure that fact with its bizarre rulings and non-rulings. Johnson made a titanic, one of a kind, Dustin Johnson birdie on the 18th hole, the one nobody can birdie, to clinch the U.S. Open trophy and the greatest victory of his life.

And then he said the most Dustin Johnson thing ever:

So, now what? Everybody has been waiting to see who would own the golf world in the post-Tiger era. McIlroy has staked a claim. Spieth and Day have staked a claim.

And now, Dustin Johnson, age 31, is the U.S. Open champion. He knows that he can hold up under even the most ridiculous conditions and circumstances. He still hits the ball longer than anybody and higher than anybody. He now rouses American galleries like no one except Phil Mickelson.

You get the sense, talking to the other players, that they now know that the floodgates have opened, and the Age of Dustin is about to begin.