How we will forever remember the 115th U.S. Open 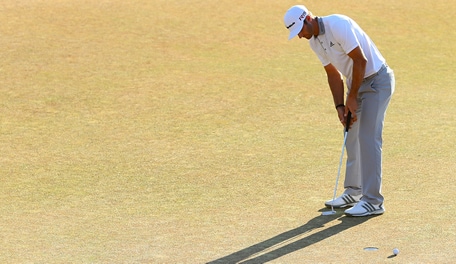 Before Babe Ruth set the single season home run record, it belonged to a man named Ned Williamson, who hit a staggering 27 home runs in that lazy, hazy summer of 1884. Do you know why Williamson hit 27 home runs that year when he never hit more than nine in any other season? Well, see, that year the Cubs played their games at the second version of Lake Front Park, a tiny little ballpark with a right field fence less than 200 feet away. That fence was so close that the rule until 1884 was that any ball hit over it was only a ground rule double.

In 1884, though, the Cubs decided that balls hit over the fence should be home runs. So Williamson poked a bunch of home runs over that sham of a fence and set a record that would last for more than 25 years. The Cubs hit, get this, almost four times as many home runs as any other team. The point is that, understood in context, Williamson’s great feat wasn’t great at all. But over time context fades, and by the time Ruth broke the mark, Williamson’s home run record was taken seriously.

In other words, the context of Chambers Bay and this U.S. Open will fade over time. The broccoli greens will slowly wash out from memory. The sight of balls skipping on those greens like happy children will grow faint. The pictures of golfers pointing at the holes, pointing at spots along the bumpy trail, watching their golf balls kick in whatever direction the fates took them, looking incredulously at their caddies as if to say, “Is this even real?” … all of that will bleach and whiten until it is all but gone.

And all that will remain is Dustin Johnson, that hapless soul with the overpowering swing and supermodel fiance, three-putting from 13 feet to blow the U.S. Open.

Such is the starkness of our games. Jordan Spieth, that extraordinary 21-year-old, almost blew the U.S. Open himself on these silly greens before he found it handed to him. He looked entirely dumbfounded by the whole experience after it ended. “How do you feel?” he was asked on television, and he shrugged and said, “I don’t really know.”

Spieth is now halfway home to the single-season Grand Slam – he’s just the sixth player in history to win the Masters and U.S. Open in the same year, and he’s by far the youngest. The Open Championship is at the birthplace of golf, St. Andrews, and for the next month the hype will be overwhelming. Then again, Spieth seems to have no problem dealing with hype.

“It’s possible,” he says of the slam. And who can doubt him?

Chambers Bay is either the luckiest course ever built or it has some sort of inner greatness that is hard to define, because Sunday proved to be a thrill-ride unlike any U.S. Open in recent memory. The course was set up easy from tee-to-green, with Chambers Bay’s now famous mounds and hills seemingly all pointed toward the holes. Balls rolled and turned and trundled close to the hole, leaving only the question of whether golfers actually could knock the balls in over the most complained about greens in major championship history.

Henrik Stenson called these greens broccoli. Rory McIlroy disagreed because broccoli is actually green; he called the surfaces cauliflower. Billy Horschel, who Sunday put on a spirited silent film called, “These Greens Are a Joke,” said he lost respect for the USGA. Chris Kirk said the USGA should be ashamed of itself. Camilo Villegas called them the worst greens he’d ever played. Ian Poulter called them disgraceful. Sergio Garcia said it was like playing the NBA Finals on a court with holes. Gary Player said it was a shame. And so on.

Now, admittedly, nobody wants to hear pampered professionals complaining about course conditions. As Geoff Oglivy said: “We’re so spoiled, we get such perfect surfaces … I think we’re a little bit precious sometimes as pros.” But, even if the griping plinked off-key in some cases, it was clear that the Chambers Bay greens were, at the very least, not up to the standards that golfers expect for a major championship. For four days, you could see golf balls jumping and kicking sideways and doing odd disco moves. That was no illusion.

We saw Rory McIlroy, the best in the world, miss probably a dozen short putts. We saw Tiger Woods, already in a precarious mental spot, miss short putts and just smile. We even saw the winner, Spieth, that nerveless 21-year-old with a surgeon’s putting touch, miss a handful of tiny putts, including one of the 17th green that finished off a mini-meltdown. When everything on that hole settled – Spieth’s double bogey and, a minute later, Johnson’s remarkable birdie — Spieth had blown a three-shot lead on that 17th hole. He went to the 18th needing to somehow find confidence and good feelings.

This is Spieth’s strength after all; he has a boundless well of confidence and good feelings. Experts will point out again and again that Spieth doesn’t do anything extraordinarily well. He doesn’t hit the ball as long, as high or as straight as some of the other stars. His touch around the greens and his putting is fantastic, of course, but he’s not automatic around there, either. When McIlroy was asked what part of Spieth’s game he would want for himself, he politely hemmed and hawed compliments before finally settling blandly on putting. It was as good an answer as he could come up with.

Spieth’s game just can’t be dissected that way, because what makes him so good is not one thing or another; it’s the totality of his game plus a couple of golf’s greatest gift: The ability to shake off bad breaks and mistakes like they never happened and the ability to see pressure as something to be enjoyed. The former was Tom Watson’s great talent, the latter Jack Nicklaus’. When Nicklaus went to the 18th hole with a chance to win, it was his favorite time. “That is why you play golf,” he said. Spieth feels the same way. He hit a perfect drive on the par-5 18th, the one he had earlier called “the dumbest hole I’ve ever played in my life.”*

(*Though he called it that when it was a par-4, another weird quirk of Chambers Bay.)

Spieth stuck a wonderful second shot to give himself an eagle putt. He two-putted for birdie to take a one-shot lead, and then he left the stage to Johnson. “I didn’t think it was enough,” Spieth said.

For years now, players and teaching pros have been saying that when it comes to pure talent, perhaps no one in the world can touch Johnson. He hits the ball miles and straight. His iron shots are the highest in the world and, so, can land the softest. His problems, then, have been a shaky putting stroke and an unenviable ability to self-destruct. This has proven to be true on the course (his three previous runs at major championships had all ended catastrophically) and off the course. He took six months off from golf in 2014; he still has not discussed why but Sports Illustrated reported he was serving a six-month suspension relating to failed drug tests.

On the 72nd hole, we would see Johnson in full color. He unleashed a titanic 337-yard drive down the middle of the fairway to set up a spectacular second shot, with the ball rolling to 13 feet away. That was the eagle putt that could have won the U.S. Open. Spieth, still kicking himself for his 17th-hole disaster, was just hoping for a shot at a playoff.

It was the end to a wild day. McIlroy played incredible golf for 13 holes to get himself back in contention, but then Chambers Bay’s greens got him. Louis Oosthuizen started off terribly but made five straight birdies on the back nine – the greens had gotten him way back on Thursday when he shot 77. Adam Scott made a magnificent run. South African Branden Grace seemed to be just about the only guy who had unlocked these greens until his tee shot at 16 sailed right on to the railroad tracks. Nobody can deny that Chambers Bay brought out magic from some of the world’s best golfers on Sunday, and the USGA and Chambers Bay defenders will make that point again and again.

Then the stage was left to Johnson, a shaky putter and a tortured soul looked to knock a putt in from a baker’s dozen over the nastiest greens the U.S. Open had ever seen. His first putt raced 4 feet past the hole. His second slid left – Johnson would quietly say it kicked left. Neither putt seriously threatened. The U.S. Open was lost. “I did everything I could,” Johnson would say.

Those last missed putts will stay powerful in the memory long after people forget just how gnarly the greens were at Chambers Bay. People gradually will forget that Spieth had almost blown the golf tournament first, or that nobody hit the ball better than McIlroy, who couldn’t make a putt on these greens, or that Johnson had made a birdie on the 17th hole just to give him this chance. That’s how it goes in sports. Context fades. Images linger.

The most famous quote about the U.S. Open comes from former USGA president Sandy Tatum, who faced vicious criticism after the 1974 U.S. Open, which became known as the Massacre at Winged Foot. The golf course set up was savage; the winning score was 7 over par. Lee Trevino said at the tournament, “I felt like I was playing miniature golf without sideboards.” Johnny Miller said, “This golf course makes you feel like a dog.”

Tatum was asked why the USGA felt the need to humiliate players. “We’re not trying to embarrass the best players in the world,” Tatum said. “We’re trying to identify them.”

That quote has been repeated and also ridiculed through the years. But Hale Irwin won that 1974 U.S. Open; he’s now in the World Golf Hall of Fame. And if the point is identifying the best player in the world, Chambers Bay certainly made a statement. Nobody on earth is playing golf as well as Spieth.