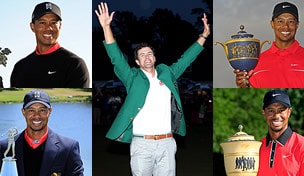 Getty Images
HUMBLE, TX - MARCH 31: Steve Stricker hits a drive during the first round of the Shell Houston Open at Redstone Golf Club on March 31, 2011 in Humble, Texas. (Photo by Michael Cohen/Getty Images)  -

Tom Tango, one of the most incisive baseball analysts working today, asks a fascinating golf question: When you are analyzing a golfer’s greatness, how many non-major golf victories equal a major championship?

It is a particularly great question this year as we try to determine who exactly is the Player of the Year.

This year, Tiger Woods has won five times. And we’re not talking about five inconsequential tournaments. He won The Players Championship, which has perhaps the best field of any tournament in the world and many consider a sort of minor major. He won two World Golf Championships events. He won the prestigious Arnold Palmer Invitational. It has, in so many ways, been a remarkable year.

This year, Adam Scott has won just twice. This past weekend, he sort of backed into a victory at The Barclays – he shot a final-round 66, got into the clubhouse, and watched everyone self-destruct down the stretch. And earlier this year, of course, he won the Masters – maybe the most illustrious golf tournament in the world.

So: Who is your Player of the Year?

On one level, it seems pretty simple, no? If you are looking at the whole season, there’s no question it’s Tiger Woods. He has won twice as much money as Scott. He has dominated the Tour like no one since, well, himself. The list of golfers who have won five times in a season since 1960 is quite short:

Wow. Tiger. Ten times. That’s just crazy. As you probably know, Woods (79 victories) is just three PGA Tour victories behind Sam Snead (82). But any serious analysis of the two careers shows Woods is already ahead. Snead’s victory count includes various suspect titles like the five four-ball tournaments he won with a partner and the 1950 Bing Crosby Pro-Am where he tied with three others and they just gave all of them the title. It will be a cool story when Woods officially passes Snead just like it was a cool story when Ichiro got 4,000 hits between Japan and the U.S. But, realistically, Woods already has more real victories.

What does it mean, though? We judge history through our own prism. And truth is that people – most people, I think – will rank the best golfers based almost entirely on their major championship record. Fair? Maybe not. Logical? Maybe not. Mathematically sound? Maybe not. But until Woods came along, it was almost universally accepted that Jack Nicklaus was the best golfer who ever lived. Nicklaus did not win as many golf tournaments as Snead.

Most people would say Ben Hogan was better than Snead. Hogan didn’t win nearly as many golf tournaments as Snead.

Here is the ranking of golfers by PGA Tour events won:

And here’s the ranking of golfers by professional majors won:

Now, you tell me: Which list comes closer to the way you view the all-time golfers? For me, it’s the second list, and it’s not even close. I don’t believe regular tournaments are meaningless – they matter. But I think they matter in the same way that regular season NFL games matter. The Cleveland Browns between 1986 and 1989 went 41-21-1 and reached three AFC Championship games, an amazing run. Those victories certainly mattered. Does anyone think of that as a great team? No. I lived and died with those teams and even I don’t think of it as a great team.

In the 1990s, the Kansas City Chiefs won 101 games, one of only four NFL teams to do so, and made the playoffs seven times. Were the 1990s Chiefs a great team? Nobody thinks so, not even people in Kansas City. They didn’t win a Super Bowl. They didn’t reach a Super Bowl. For most football fans, greatness comes with Super Bowl championships (and semi-greatness can come by finishing runner up in the Super Bowl – the Buffalo Bills won 103 games in the 1990s, lost four Super Bowls, and some do think of them as a great team).

And for moderate golf fans, major championships are more or less the only qualifier for greatness. If a golfer won 150 regular PGA Tour events and zero majors I would wager that nobody would consider him the greatest ever. But if a golfer won 30 majors and zero regular tournaments, yeah, I’d bet he would be widely viewed as the best ever.

Nobody understands this kind of history-making better than Woods. He laid out the blueprint before he ever hit a single shot on the PGA Tour. When he was a kid, the story goes, he did not have a poster of Snead’s accomplishments on his wall. He had Nicklaus’ 18 major championships up there. That’s the pinnacle.

And so, when Tom Tango asks how many non-major championships equal a major, I would have to answer that it depends on what you are measuring. For most, winning a regular PGA Tour event is pretty close to winning a major championship. Sometimes it’s even better.

Look at Derek Ernst. He’s a 24-year-old professional golfer who clubbed his way through qualifying school, made it to the cusp of the Tour (he was ranked 1,207th in the world), was headed to a Web.com Tour event in Georgia when he was called and told he had made it into the Wells Fargo Championship in Charlotte as a fourth alternate. He raced to Charlotte. And then he won the thing. He won more than $1 million and a two-year exemption on the Tour, and you can bet his feeling was no different than the feelings of Adam Scott or Jason Dufner when they won their first major championship. If anything, he was MORE excited.

So, yes, for most professional golfers, regular tournaments are hugely important. I don’t know what the algebra would be, but I would bet that for most golfers winning a major is maybe two or three times bigger than a regular event.

But in that special instance when you are determining the very best golfers – both ever and in a single season – the formula changes drastically. I’m not sure that in that case there is any number of regular Tour events that would equal a major.

Who is the Player of the Year? By the numbers, by the money, by consistency, by any fair measure of the whole season, Woods has had a better year than Scott and everyone else. But Scott won the Masters. Phil Mickelson won the British Open and the Phoenix Open. Justin Rose won the U.S. Open and that’s it.

Do you think if given the chance, Woods would trade seasons with any of them right now? You better believe he would.

Who is Player of the Year? My vote goes to Scott.