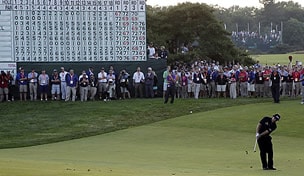 ARDMORE, Pa. – Phil Mickelson stood over his ball at the bottom of the hill on the last hole at Merion, and he tried to visualize the miracle shot. He has always been able to do this: Visualize the miracle,  and then do it in real life. No player in a generation, probably none since the swashbuckling Spaniard Seve Ballesteros, has tried so many audacious and ridiculous and fabulous shots as Mickelson and pulled them off. Flop shots, hooks around trees, slices from pine straw, chip-ins from everywhere.

This time, Mickelson needed the miracle shot. He had no other option. Mickelson trailed Justin Rose by one. He needed birdie on a hole that had not been birdied by anyone in two days. He needed to knock the ball in from off the green, some 30 yards away. Before he set up, he stood over the ball without a club, and he practiced a swing. Then he looked out at the green for a long time, as if watching an invisible ball roll toward the hole. Yes, he looked for a long time, and then tried the real thing.

In real life, his ball did not go in the hole. And Rose won the U.S. Open.

Well, that’s not exactly right. Rose did not win the U.S. Open. He endured it. He survived it. That was the only way you could win at Merion. Rose might be one of the best ball-strikers in the world, but he made five bogeys on Sunday, had two putts on the lip that somehow dropped in and hit a breathtaking 4-iron on the 18th hole from almost exactly the same spot where Ben Hogan had once hit the most famous 1-iron in the game’s history. That left him at 1 over par. That made him the champion.

It should be said, even Rose’s brilliant shot on the 18th didn’t stay on the green.

Well, it was rough like that all week. There was talk coming into Merion that the golf course was too easy for a U.S. Open, especially after buckets of rain soaked it down and, supposedly, softened it up. The betting line was that it would take 8 or 9 under to win the Open, and some media types wondered if players might set scoring records.

“You must be very good golfers,” the world’s No. 2-ranked player, Rory McIlroy, said to those media members after Merion knocked him around. He finished 14 over par. The No. 1-ranked player, Tiger Woods, finished 13 over, his worst four-round score in relation to par ever at a major championship. Steve Stricker, as steady a player as you will find anywhere, hit a ball out of bounds and then, one shot later, hit another one out of bounds, this one a shank that seemed to come from right out of your local driving range.

“The pins were brutal,” an exhausted Hunter Mahan said.

“It was tricky out there,” Rickie Fowler said.

“Well, that was fun,” Ian Poulter tweeted sarcastically after finishing 11 over par.

But, at the heart of the story, as it often goes at the U.S. Open, was Phil Mickelson. It seems strange, given his daring style and birdie-infused game, that he has had so many tangles with the U.S. Open. The Open is supposed to lean toward the straight hitters, the grinders, the par-makers. And yet, time and again, Mickelson has put himself in position to win the national championship.

And time and again – heartbreak.

This week, maybe for a while, it looked different. He seemed loose. He did not even practice, instead going back to California to see his daughter’s eighth-grade graduation. He flew back, arrived in the wee hours of the morning Thursday, went right to the course and promptly shot 3 under to take the lead. He looked good.  He felt good. He talked about how much he loved the course. He talked about how well he was hitting it.

The stars seemed aligned. Even on a rough day like Friday, Mickelson kept it together and birdied the final hole to leave with good feelings. On Saturday, a day he missed chance after chance, he maintained the lead. Sunday was his 43rd birthday. Sunday was Father’s Day. Heck, even sportswriters were praying for Mickelson.

Then, on the 10th hole – after a rough start – Mickelson hit one of those miracle shots. He holed out from 76 yards for an eagle that gave him the lead. Madness. Mayhem. Mickelson leaped in the air – higher than he jumped when he won his first Masters in 2004 – and raised his arms above his head. He had finished second at the U.S. Open five times, an unkind record. Now … finally … maybe …

“It would have changed the way I look at this tournament entirely,” Mickelson would say.

But Merion – oh, Merion. This just wasn’t the place for fairy tales. This was a place where putts slid by, where balls buried in the rough, where out-of-bounds lines seemed to line the fairways. If Merion could talk, it would sound like Darth Vader. If Merion could drive, it would cut you off in traffic. If it were a cartoon, it would be Jessica Rabbit. “I’m not mean,” it would say, “the USGA just made me that way.”

And so, in the last eight holes, Phil Mickelson alternated between disasters and disappointment – on the 12th hole he thought he’d made the birdie putt but he didn’t. On the 13th, he pulled the wrong wedge – he had five wedges to choose from – and hit his shot over the green, a terrible shot that led to a terrible bogey. On the 14th, he made a death-defying par with the only longish putt he sank all day. On the 15th, his ball found the green, but this being Merion he STILL had to chip the ball because of the angle, and he made bogey again. On 16, he was sure he made his birdie putt, but the ball did not go in.

“If I had won today,” Mickelson would say when it ended, “or if I ultimately win, I’ll look back at the Opens and think that (finishing seconds so many times) was positive. …”

And here Mickelson paused for a second. He has always said, with a great deal of certainty in his voice, that he will win the U.S. Open someday. But, now – lost in the sadness of the moment – he did not sound so positive. He’s 43. Time runs away. And Merion took a little bit of his heart.

“If I never get the Open,” he continued, “then I’ll look back and think … every time I think of the Open, I just think of heartbreak.”

In the end, Mickelson went to the 18th hole needing birdie, and he drove the ball into the rough. His second shot ended up short of the green, and that was where he stood and tried to visualize a miracle shot. He took that imaginary swing. He watched that imaginary ball.

Only he knows if, in his imagination, the ball dropped in the cup.

My guess is no. The ball did not drop for Mickelson at Merion, not even in dreams.