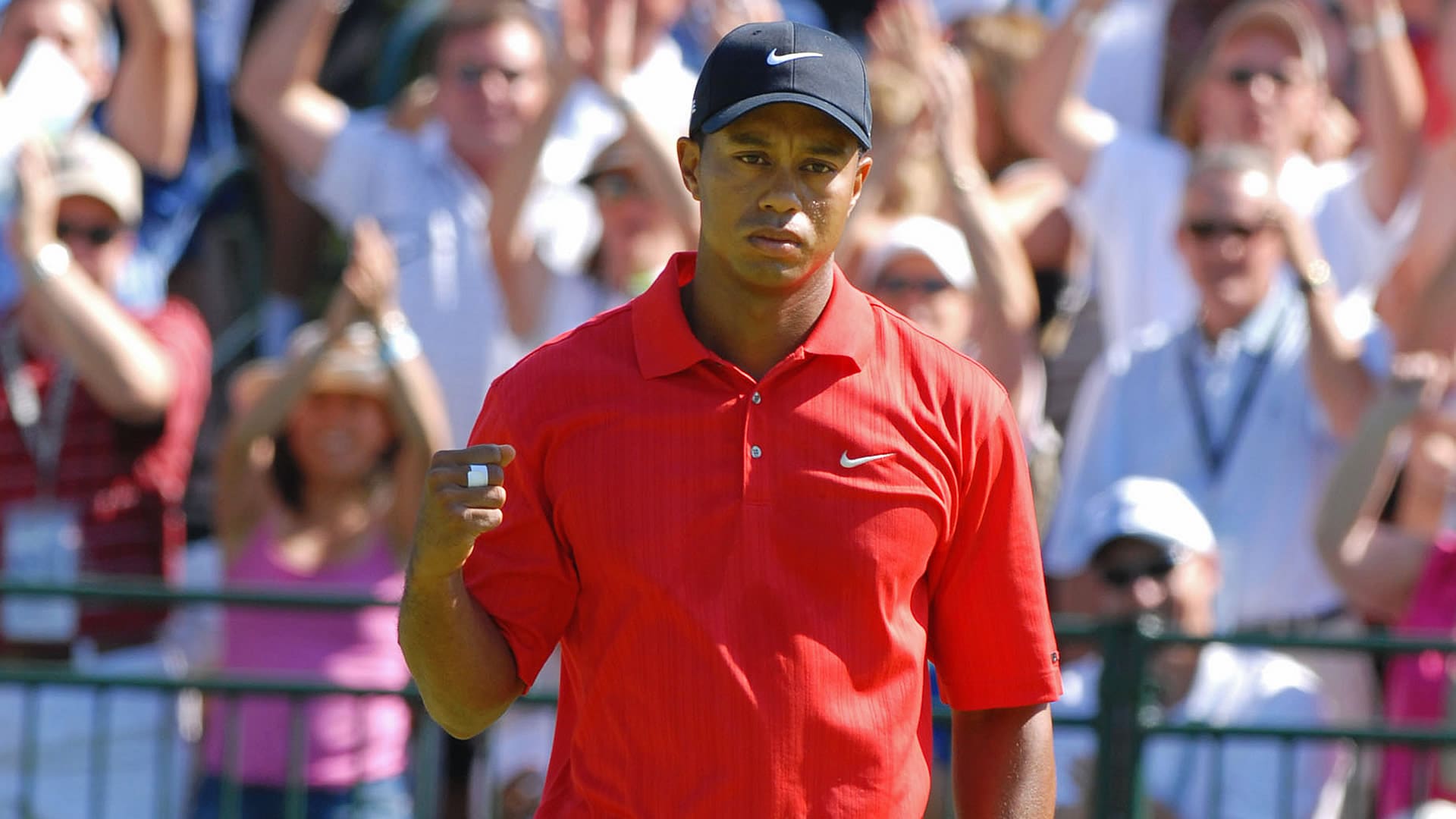 Most people will tell you that Tiger Woods played his best golf – and the best golf ever played – during that crazy stretch in 2000-01 when he won four major championships in a row. It's a strong argument. Woods was 25 then, and he was at the peak of his powers. In 2000, he led the PGA Tour in total driving, in ball striking, in birdies, in eagles, in greens hit in regulation and, of course, in scoring. He was the best at everything. His unadjusted scoring average of 68.17* is the lowest in golf history.

*The PGA Tour prefers to adjust scoring average so that it takes into account the scoring in the fields where they played. Tiger's 67.79 adjusted scoring average is tied for the lowest ever – tied, that is, with himself in 2007.

But his dominance goes beyond numbers. There was Tiger's mind-blowing performance at the 2000 U.S. Open. The USGA set up Pebble Beach to play impossibly hard; nobody in the world could break par on that course. I mean that literally – Ernie Els, perhaps the second-best player on earth at the time, played his guts out and shot 3 over par, good enough for second place.

That was probably the best golf ever played. Then again, three weeks later Woods went to St. Andrews, the birthplace of golf, and shot 19 under par, eight shots better than anyone else. So that was pretty good, too. Then he went to Louisville and won one of the great duels in golf history against the unknown but irrepressible Bob May. Then he won a few more tournaments, including The Players Championship, showed up in Augusta with the weight of history on his back, and simply won the Masters without too much tension. It was staggering.

But I would make the argument that the reason why Woods still hovers over the game – why people refuse to give up on him, why updates about his condition still make news, why Phil Mickelson celebrated him – does not have much to do with how the young Tiger played. There have been many incredible young athletes. Think Dwight Gooden in 1985. Think Herschel Walker as a freshman at Georgia or Pistol Pete Maravich at LSU. Think Monica Seles in the early 1990s when she was hitting every line. Think Johnny Miller when he was knocking down flagsticks in 1973 and '74.

It's not all that hard to let go of brilliant young athletes.

See, it isn't THAT Tiger Woods we miss. The Tiger Woods we miss, the one who still preys on our imagination, emerged 10 years ago, in 2006. I'm not sure Woods played better golf in 2006, but he was different. He was indomitable. He made us believe it could last forever.

I often think of the Paul Newman movie "The Hustler," because it is the closest Hollywood ever came to capturing the powerful, mysterious and, yes, dark motivations that can separate winning and losing. Newman, as Fast Eddie Felson, had lost an epic, 48-hour, alcohol-fueled pool match with Minnesota Fats, and the loss sent him spiraling. The movie is about the painful and tragic journey that brought him back to the pool table as a different man – sadder, less idealistic and invincible.

"I quit, Eddie," Fats says in the climactic moment. "I can't beat you."

Well, Tiger's 2006 season reminded me of that movie. That was the year when Earl Woods died. Everyone knows that Earl shaped the life of his son both on the golf course and off. Earl had utterly convinced Tiger that he was destined for a spectacular life, big and grand and awe-inspiring. You could see it in the young Tiger: He was unshakeable. He had no doubts. Tiger KNEW he was going to kill the drive. He knew he was going to hit it close. He knew he was going to make the putt. He knew it absolutely. Earl had told him so.

When the father died in 2006, the son obviously was shaken. Tiger took nine weeks off and would admit, in a rare moment of disclosure, that he did not want to go back on the golf course. Everything there reminded him of Earl. He returned in time to play the U.S. Open and, for the first time in memory, he was not there. Tiger Woods' genius on the golf course, I think, came down to his ability to be absolutely and unconditionally present in the moment. When he hit a shot – at least from an outsider's point of view – he did not seem to dedicate even one or two percent of his brain to other things such as doubts or memories or a joke he'd heard or a song from the radio or where he'd go out for dinner. No, he seemed all in, 100 percent of mind and body and spirit, all dedicated to that precise shot and that exact instant.

But at that Open, he looked lost. Woods would not even take practice swings. He shot a couple of 76s that could have been even worse and for the first time in his professional career, he missed the cut at a major championship. In that moment, there was some concern: How well would Tiger play with his hero and best friend and father to guide him? What would the 30-something version of Tiger Woods look like?

He took another three weeks to get his head straight and his game together. And then Tiger returned. He went to the Western Open, had a sketchy opening round, worked a bit on the range with Hank Haney, and shot 12 under par the final three rounds to finish a close second.

Then, he went to Royal Liverpool, shot 18 under par, and breezed to victory for his second consecutive Open Championship title. That was his 11th major championship victory.

Off to the Buick Open in Michigan, Woods shot four consecutive 66s to win easily.

He went to Medinah for the PGA Championship and matched the course record with a 65 on Saturday to give him a share of the lead with Luke Donald. Then, on Sunday, he ran away from the field, beating Donald by six shots and winning the tournament by five. That was his 12th major. He was three years ahead of Nicklaus' pace.

At the Bridgestone Invitational in Akron, Woods shot a final-round 68 to force a playoff with third-round leader Stewart Cink. Woods won the playoff on the fourth hole. That made his career playoff record 15-2. It was also his fourth victory in a row.

The next week, at the Deutsche Bank Championship in Boston, he came from way behind on Sunday by shooting a 63, and he beat Vijay Singh by two shots. That was his fifth victory in a row.

After a poor American Ryder Cup – though Woods had a winning record and rolled in his singles match – he went right to the World Golf Championships and led wire-to-wire, opening with a 63 and closing with an eight-shot victory over Ian Poulter and Adam Scott. That was his sixth victory in a row, each one more dominant.

Then he obviously won his own tournament which doesn't count in the streak but is worth mentioning. And in January, at his next tournament, at the Buick Invitational, well, he won again, his seventh straight stroke-play victory.

That, I think, is when Woods convinced the rest of us that he would never stop. He was no longer the inspired young man overpowering golf courses and running away from the field. He was, instead, the master. Kids had come along who could hit the ball farther than he did. A few of them were better ball strikers than him. A handful could even match his putting. The golf courses were longer and tougher – "Tiger-proofed" was the description – and the aura that the young Tiger Woods had radiated was a bit faded.

But it didn't matter: He won anyway. He won every week.

"I mean how can I lose?" Fast Eddie Felson rapped as he won the final pool game. "Because you were right ... it's not enough that you just have talent. You gotta have character, too."

Then it ended, suddenly, maddeningly, with a scandal and a series of injuries and swing changes and more injuries. Now Woods is 40, he's hurt, he hasn't played golf in six months, and there's no word when he will play again. Wednesday came a semi-update, in the form of a relaxed 9-iron shot in a simulator.

Phil Mickelson talks about how no one today is "remotely close to the level of performance Tiger was in his prime," which, let's be honest, is the sort of thing you say about some long-gone legend who ain't coming back.