An unscientific look at Tiger and his desire 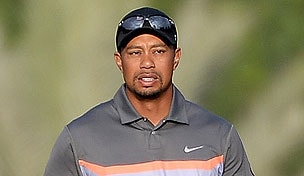 SOCHI, Russia – So one of the fun things I’m doing while here: I’m asking random Russian people to name the first active American athlete who comes to mind. It’s just an offbeat little exercise. A couple have asked me to name Russian athletes I’m familiar with, and I come armed with Alexander Ovechkin, Maria Sharapova, Andrei Kirilenko, Yevgeny Malkin, Drago …

But I’d love it if just one person would say Rocky Balboa.

Here’s the point: So far, the names I’ve heard are more or less who you would expect – LeBron James, Kobe Bryant, Michael Phelps. One guy, wearing a New York Giants ski cap, said Eli Manning. I love that. In all, I’ve probably asked 11 or 12 people, so it’s hardly worth mentioning. But there is one semi-interesting thing.

Nobody yet has named Tiger Woods.

Now, this is only semi-interesting because golf is all but nonexistent in Russia. For years there was only one 18-hole golf course in the entire country; even now there are fewer than a half dozen. Almost nobody plays golf. And professional golf is simply a non-starter here. So, logically, there’s no reason that anyone here should know Woods or care.

Still, I do keep waiting for someone to mention him. I have long believed that Woods – like Babe Ruth, Muhammad Ali, Michael Jordan and Pele before him – was bigger than his sport. At his peak he transcended golf, transcended America, had become something iconic and symbolic and titanic.

You might think this is all just an excuse to write about Woods’ slow start – and you would not be entirely wrong. Woods has played in two tournaments so far in 2014, both at places he has fared well. He started the year at the Famers Insurance Open at Torrey Pines in San Diego. He has won the tournament seven times (four in a row from 2005-08) and Torrey is the site of his greatest victory, the 2008 U.S. Open he won on one leg over Rocco Mediate in a playoff. This time he shot a mesmerizing 79 on the third day and missed the 54-hole cut. It was kind of mind-blowing.

Then he went to Dubai, a tournament he has won twice and has always impressed. He finished 41st despite making three straight birdies to finish. Sky Sports analyst and swing coach Ewen Murray put it bluntly: “I think this is the worst I have ever seen Woods technically.”

There have been a million analyses of Woods’ rough start – and his decision to take a little time off to rest and work on his game – which might mean something and, just as easily, might not. It’s just two tournaments. It is a month or two before the golf season really gets going. The temptation with Woods is always to put too much emphasis on the moment – to shout, “He’s back!” when he wins something; to lament “He’s finished!” when he does not. If he wins his next tournament (like at the Honda), he will become the odds-on favorite at the Masters all over again.

Still, the sluggish start is a reminder that Tiger Woods – even if he plays great golf like he did often last year – is not Tiger Woods. He’s still the biggest golfer, often the best, certainly the most interesting and the one who can move the needle. But he’s a golfer. The Tiger Woods who stretched our imagination, who broke through the constraints of his own sport, who represented not just golf brilliance but all brilliance – that guy is gone. Well, he’s not gone. He’s 38, tired, working with another swing coach; his body has been stitched up several times and you sometimes wonder why he even bothers to play at Farmers Insurance Opens.

A few years ago, even before the tabloid scandal, a prominent golfer told me that he did not think Woods would be a great old golfer like Jack Nicklaus or Ben Hogan had been. When I asked why, he said: “Because great success breeds great boredom.” His point was that the laser focus and the desperate hunger that fueled Woods to play golf at a previously unachieved level, that stuff grows old just like the body. He doubted Woods would stay that interested into his 40s.

“You don’t just need talent and work ethic to be great,” he told me. “You need a reason.”

Tiger is rich. He’s endured turbulent fame. He played his sport better than anyone who ever lived. Does he have that reason? That motivation, week in and week out – not just at the majors? My guess is that, like most of us, some days he will, some days he won’t. Nobody stays forever young. Even Bob Dylan is doing car commercials.