Will Woods ever come from behind to win a major? 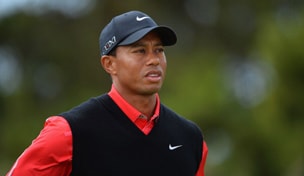 The biggest question in golf has been the same for a long time: Will Tiger Woods win 19 major championships, breaking Jack Nicklaus’ record? That’s the question that has been asked ever since Woods came on the scene, especially after we learned that he used to keep a poster in his childhood bedroom with Nicklaus’ accomplishment in the same way that many kids keep growth charts in theirs.

The consensus answer to the question has changed many times through they years.

In 2009, when Woods showed a few vulnerabilities (injuries, and losing a third-round lead at a major championship for the first time – and to Y.E. Yang, no less), the answer was: Sure, probably he will break it.

In 2010, when Woods was disgraced after his private life was splashed on tabloid covers for all to see, the answer was: Um, well, maybe.

And now? What’s the answer now? Woods hasn’t won any of the last 21 major championships. It’s a longer dry spell than Nicklaus ever had – even longer than the gap between Nicklaus’ PGA Championship victory in 1980 and his extraordinary Masters victory at the age of 46. I know there are still many people who think Woods will beat Nicklaus’ mark, but I don’t, I haven’t for a long time. And the odds are getting longer all the time.

In any case, there might be an even more interesting question to ask about Woods.

Will Tiger Woods ever come from behind to win a major championship on Sunday?

For a long time now, this shortfall has seemed to me a pretty big hole in Tiger Woods’ remarkable record. Yes, true, it might seem like nitpicking a masterpiece of a career, like saying that the lighting around the Mona Lisa is off. But Woods has always been playing for something bigger than money or victories. He has been trying for best ever.

Every single great player for the last 50 years – every last one of them – had a Sunday where they came off the pace and won. Nicklaus came from behind eight times on Sunday through the years. Yeah. Eight. He was 22 years old when he trailed Arnold Palmer by two shots at Oakmont, the U.S. Open, and he came back and won in a playoff. He was 46 when he went into Sunday at Augusta down four shots and in a seven-way tie for ninth place.

Arnold Palmer came from seven back at the 1960 U.S. Open in Cherry Hills and it is the summit of his extraordinary career.* Gary Player came back four times, his most thrilling being the 64 he shot on Sunday at the 1978 Masters to overcome a seven-shot deficit. Tom Watson twice came back from three back at the British Open. Nick Faldo won the 1989 Masters from five back and the 1996 Masters from six back (when Greg Norman collapsed). And so on.

*It is amazing to me that for Palmer – who is known for the Sunday charge – it is the only time in his career that he came back to win a major in the final round.

All of the great ones have come from behind to win. All of them have had a miraculous Sunday when they took  chances and pushed the limits and knocked down some flagsticks and made some crazy putts. In most cases, these are the rounds that are best remembered.

But Tiger Woods – the extraordinary Tiger Woods – has not yet done it.  Oh, sure, he’s had some astounding Sunday battles (like his playoff with Bob May at the PGA) and he has hit some legendary Sunday shots (like the chip-in at 16 at Augusta). But all of them have come when he had some measure of control. all 14 of his major championships have come from the 54-hole lead. This makes him the best closer in the history of sports (Mariano Rivera included).

But no Sunday comebacks? Not one? It seems impossible. But it’s true. I’ve heard people say he’s not the Sunday player he used to be. But even the young Tiger Woods never came back to win. He came close one time, in 2002, at the PGA Championship at Hazeltine, when he entered Sunday down five and shot a brilliant 67 at the PGA Championship. He fell one shot short of Rich Beem, who had the day and tournament of his life. But Woods was pretty magical that day.

Since then? No. He has not come from behind and, for the most part, he has not even scared the leaders when he was not ONE of the leaders. A few examples:

• In 2003, he was four shots back at Augusta heading into the final round of the Masters. He blew up, shot 75, and fell off the leaderboard while Mike Weir shot 68 and won in a playoff (and Len Mattiace shot SIXTY-FIVE to get in that playoff).

• Same year, at the British Open at Royal St. George’s, he was two shots off the lead going into Sunday. He shot 71, even par, and Ben Curtis – who also went into the final day down two strokes – shot better and won.

• At the 2005 U.S. Open, Woods did charge a bit, but only after a bogey-bogey start doomed him, and he fell two shots short of Michael Campbell.

• At the 2006 Masters, he trailed Phil Mickelson by two entering Sunday, but could not keep a round going and he shot 70 and finished tied for third, three back.

• At the 2010 Masters, he was four behind Lee Westwood going into the final round, and he shot a solid 69, but Phil Mickelson shot a breathtaking 67 and won.

There are more. You cannot really expect any golfer – even one as great as Tiger Woods – to be extraordinary on a specific Sunday. Golf isn’t like that. But over time, sure, you would think Woods would have won ONE of these tournaments, right? At some point, you would have to think he would go crazy on a Sunday, shoot 64 or something like that, come from way behind, steal a major championship from someone else. He seems too gifted, too determined, too daring, too amazing to never take a major championship Sunday and make it his own.

But it has not happened. Sunday at Muirfield seemed the time and place. Woods came into the final round trailing leader Lee Westwood by two shots. According to announcer Andy North, he made sure to warm up right next to Westwood – maybe just a little “I’m coming” message. And hey, Westwood has had his Sunday demons. Woods striped his opening drive right down the center. Yes, this seemed like his day.

And then … it just wasn’t. He three-putted the first green for a bogey. He bogeyed the fourth hole (as did just about everyone else). He bogeyed the sixth. It isn’t exactly that he was playing badly. He just wasn’t playing well. Nothing good was happening. He was cursing and muttering and hitting from the deep rough and leaving putts short (or, in the jargon of golf, “woefully short”).

For a while, he could not drop out of the tournament no matter how poorly he played. Nobody could grab hold. Leader Lee Westwood faltered. His playing partner Adam Scott rose and fell. Others like Zach Johnson and Henrik Stenson and Hunter Mahan would make guest appearances near the top of the leaderboard.

And Ian Poulter, who had Tweeted his intention to make things interesting though he went into the final round eight shots back, went on a crazy run, making eagle-birdie-birdie-birdie, and then just missing two more birdie putts before he cooled off.

And Woods? Nothing interesting. Nothing seemed to fire.

Of course, the Sunday hero turned out to be Mickelson, this time with an absurdly wonderful 66 that legendary golf writer Dan Jenkins called  “one of the greatest final rounds of a major on one of the most baffling courses I’ve ever seen.” Mickelson made a series of extreme putts under fiery pressure and he hit a long putt at 16, a bomb of second shot at 17, and an approach on 18 that were all right out of Penn and Teller’s magic act. It was Mickelson at his best. And it was at just the right time.

Tiger Woods’ greatness is beyond dispute. No one ever played golf as well as he did in the early 2000s and again in the mid-2000s. Heck, he has won four times this year and he has been in contention at all the majors – he’s still playing golf about as well as anyone, ever.

But, yes, I think the career is just slightly incomplete without at least one magical Sunday when he hits a bunch of spectacular shots and charges from behind and wins. Woods still thinks he has five more major championships in him, though he turns 38 in December. Maybe he does. Maybe he’s kidding himself. In either case, Sunday hurt. The day was there for him. He just needed some Sunday magic. And, again, the Sunday magic wasn’t there