Woods vs Nicklaus: Another way to compare them 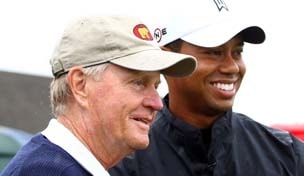 Getty Images
DUBLIN, OH - JUNE 03: Jack Nicklaus and Tiger Woods pose on the tenth tee during a skins game prior to the start of the Memorial Tournament at the Muirfield Village Golf Club on June 3, 2009 in Dublin, Ohio. (Photo by Scott Halleran/Getty Images) *** Local Caption *** Jack Nicklaus;Tiger Woods  -

ARDMORE, Pa. – An interesting question came up the other day: Most golf fans know that Jack Nicklaus did not only win 18 major championships, he also finished second 19 times. It’s an amazing but curious thing – what does it mean? Nicklaus just put himself in position time after time after time after time. This led to remarkable victories. It also led to spectacular heartbreak.

1960 U.S. Open: As an amateur, Nicklaus finished second to Arnold Palmer, who came from seven shots back. After the round, Ben Hogan, who played with Nicklaus, famously said: “I played with a kid today who should have won this thing by 10 shots.”

1972 British Open: Nicklaus had won the first two legs of the Grand Slam, and went into Sunday’s Open at Muirfield trailing Trevino by six shots. Then he put on one of the greatest British Open charges ever, shooting 6 under par for the first 15 holes to pull himself to the top of the leaderboard. He shot 1 over on the final three holes and lost to Trevino by a shot.

1974 PGA Championship: Trevino got him again, this time by a shot at Tanglewood Park in North Carolina.

1977 Masters: And now it was Tom Watson’s turn – he birdied the 17th to take a one-shot lead. Nicklaus, needing birdie on 18 to force a playoff, bogeyed the hole instead.

1977 British Open: The Duel in the Sun at Turnberry is probably the greatest man-to-man duel in golf history. Nicklaus and Watson were 10 shots clear of the field as they entered the last two holes. Nicklaus’ birdie at 18 from the rough was one of golf’s most spectacular finishes, but Watson birdied the hole himself by hitting a 7-iron 2 feet from the cup, and won by a shot.

1983 PGA Championship: One more time, at age 43, Nicklaus make a spectacular charge, shooting 66 on Sunday, but fell one shot short of Hal Sutton at Riviera.

To the question: Do all those close misses add to Nicklaus’ case for greatest player of all time? Do they subtract from the case? Do they spotlight his extraordinary constancy and will or do they show that he was not as great a finisher as Tiger Woods? Or neither? Do those second places have no impact at all on the case?

So much of the Tiger Woods vs. Jack Nicklaus debate has revolved around those 18 major-championship victories. When the young Tiger Woods had that Nicklaus poster on his wall, that was the number he focused on – major championships won. In so many ways, the history battle between them has come down to simple scoreboard watching. Woods has 14 majors. Nicklaus won 18. Can Woods catch him? Will Nicklaus hold on?

But, as we are finding out again this week at the U.S. Open, there’s a more subtle difference between Nicklaus and Woods – one that, I readily admit, might not matter at all to you. Nicklaus had 19 second-place finishes. Woods, so far, has had six.

Who cares about second place? Maybe nobody. But it’s part of a story. Woods has never come from behind to win a major championship (he almost did when he birdied the last four holes at the 2002 PGA, almost catching Rich Beem). He has also, with only one exception, never allowed anyone else to come from behind to beat him. He has rarely, if ever, had his heart broken at a major (maybe the Beem loss). And he has never broken someone else’s heart. If he’s in position to win it, he wins it, the surest bet in the history of the game. The rest of the time, he just kind of lingers around, just out of reach.

This will be the 20th consecutive major championship that Tiger Woods will not win – Woods missed four of those tournaments with injuries – and of those 20, he really was in position to win only one. Well, quickly, here’s a recap (for a more in-depth look, see Jason Sobel’s fine recap):

2009 PGA: Second; this was the one heartbreak. Y.E. Yang chipped in for eagle at 14 and Woods, for the only time in his career, lost a lead going into the final round at a major.

2010 Masters: T-4, first major after the scandal, played well but was no factor on Sunday, five shots behind Phil Mickelson.

2011 Masters: T-4, Woods makes a rare Sunday charge at a major and actually ties for the lead at the turn, but his momentum stalls and he finishes four back.

2012 U.S. Open: T-21, was tied for the lead the first two days but miserable 25-hole stretch beginning Saturday knocked him out.

2012 British: T-3, but a triple bogey on Sunday – one where Woods made rare mental errors – cost him any chance.

2012 PGA: T-11, once more led after two rounds, once more flailed on weekend and finished 11 shots behind Rory McIlroy.

2013 Masters: T-4, another good but not great performance, he was never in a threatening position on Sunday.

And that takes us to this year’s U.S. Open, where Woods has never looked comfortable. Even so, he started the day just off the leaderboard, and he birdied the first hole, and then he utterly collapsed. He missed putts. He flubbed chips. He shot 6 over for the day, he’s out of the tournament, 10 shots behind Phil Mickelson, and he admits being frustrated. “I’m playing well enough to do it,” he said, “and, unfortunately, just haven’t got it done.”

So, that makes 20 majors, and if you’re being honest about it he was really only in general position to win two or three coming into Sunday. He was only a serious contender on the back nine in one.

But does that matter? Do close calls add to your legacy or detract from it? Here’s a fun statistic for you:

In the 1970s, Nicklaus finished first or second in 15 of the 40 major championships, which is amazing.

In the 2000s, Tiger Woods finished first or second in, yes, 15 of the 40 major championships, which is probably even more amazing considering the depth of talent.

The difference? In the 1970s, Nicklaus finished out of the top 10 only five times. The whole decade. He was just about always a factor. He was as invariable and inevitable as weather in San Diego.

Woods, meanwhile, finished out of the top 10 13 times in his decade, not even counting the tournaments he missed for injury. When he was on his game, he was money, he was a lock. Nobody could beat him at his best. But when he was off, even if only off a bit, he was often not in the thick of things. He was just off.

This major drought for Tiger, believe it or not, is now as long as the drought from Nicklaus’ PGA Championship in 1980 to his miraculous Masters victory at age 46.  People were saying during that time that Nicklaus was done. Nobody’s saying that about Tiger. He’s still, clearly, the best golfer in the world.

But, it is true, that Nicklaus just gave himself more chances, even during his 20-tournament drought (he finished second three times, including the Watson chip-in). He bludgeoned golfers by being in position over and over. In the year after Trevino beat him in the 1971 U.S. Open playoff, he won the Masters and British Open. One year after Watson beat him at the Duel in the Sun, he went to St. Andrews and won. Nothing ever discouraged him or knocked him off course.

People will disagree about how to weigh all those Nicklaus second-place finishes. But, you know, it has been almost four years since Woods finished second at a major. You get the feeling he even could use one of those.