2016 in rewind: Look back on a dramatic year 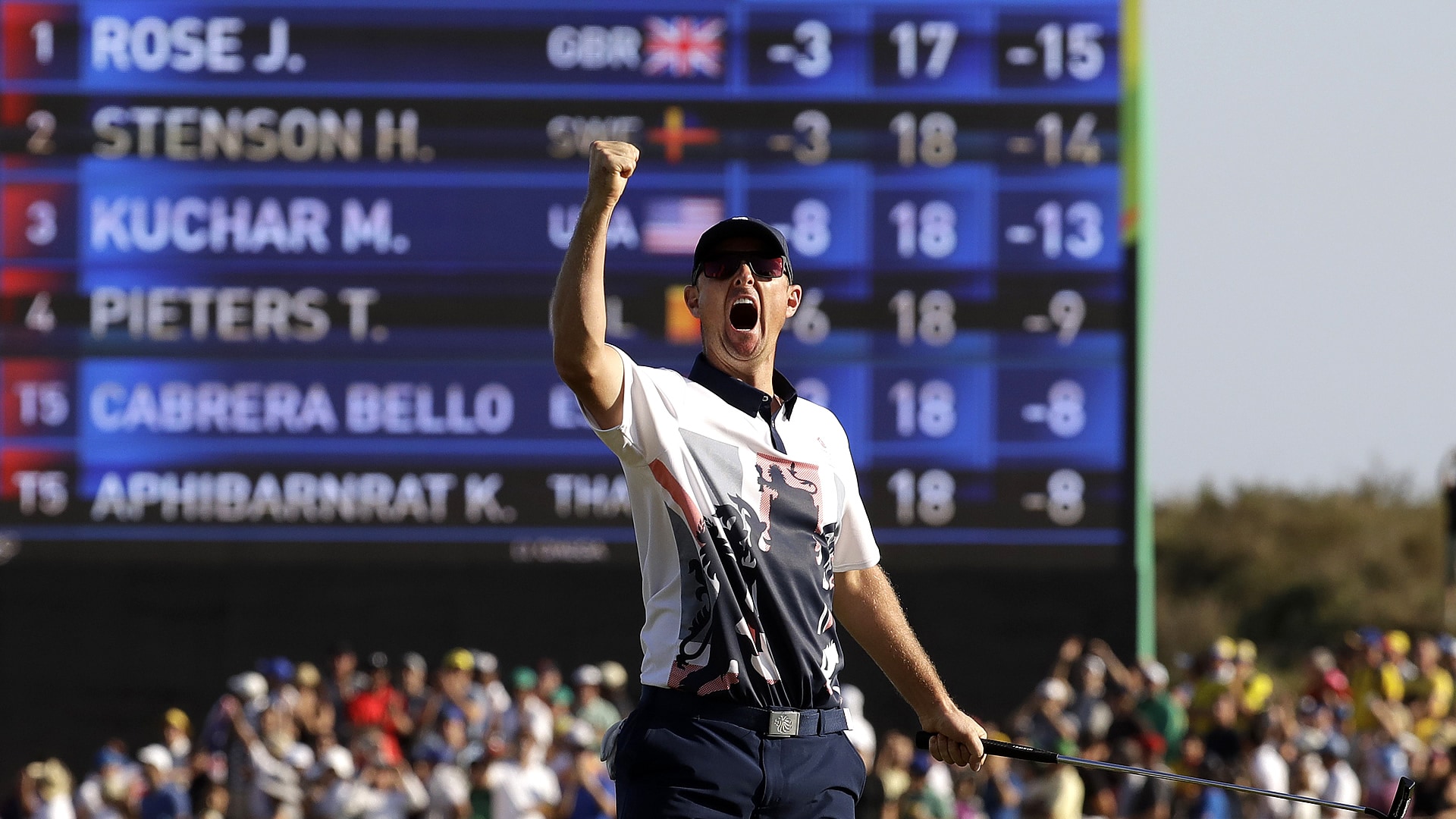 There wasn’t much doubt when 2016 dawned that the year was going to be a dramatic one for golf.

After all, the Ryder Cup is always drama-filled, regardless of the outcome. The Olympics were going to be – for better, for worse, for richer, for poorer – unique, since they hadn’t played golf in The Games for 112 years.

Rory McIroy would again attempt to complete the career Grand Slam at the Masters. Phil Mickelson would do the same at the U.S. Open at Oakmont. Jordan Spieth would be asked to do the impossible: somehow come close to matching what he had accomplished in 2015.

And there was the never-ending question, the one asked most often by non-golf fans: “So, when is Tiger returning?”

And, of course, there was the soap opera that could have been called, “As the Task Force Turns.”

All of which means the expectations bar was set extremely high, even before Spieth opened the year with an eight-shot win in Hawaii, leading people to wonder if he might never lose again.

Of course, it’s never that simple.

Before the year was over, the four biggest events had been won by first-time major champions – each an amazing and very different story. The Olympics had created more controversy than anything in golf since Annika Sorenstam played at Colonial in 2003 – more, in fact. Then, just when it seemed the five rings might come crashing down on the sport’s head, a dramatic finished breathed life and hope into the event.

The Ryder Cup not only lived up to the hype, but went beyond it, even without a breath-taking finish. Patrick Reed, once golf’s anti-hero, became Captain America. Mickelson and Matt Kuchar did one of the worst shimmys ever seen and Mickelson emerged from the rubble of Gleneagles with a new glow on his legacy. And Woods became the most talked about vice-captain (or assistant coach) in sports history. Then, in December, he actually played golf again.

A lot to take in.

To begin at the beginning …

As it turned out, Spieth had a remarkable year – for a normal player. He won twice, finished tied for second at the Masters and was part of a winning Ryder Cup team.

There was just one problem: most people don’t look at Spieth as a kid just coming into his own as a player. They look at him as the guy who apparently found the last remaining phone booth on earth early in 2015, jumped into it and emerged as Superman – or, at least, Tiger circa 2000.

When you win back-to-back majors at 21 and then almost win the next two majors (T-4 at The Open, one shot out of the playoff, and second at the PGA behind a record-setting Jason Day) and win five times in the same year, including the FedEx Cup, you are never supposed to appear human again.

For 63 holes at the Masters, Spieth did just that. He led by five shots and it appeared that – for a second straight year – he was going to disprove that old Augusta adage: “The Masters doesn’t begin until the back nine on Sunday.”

But then, instead, he proved it – emphatically.

It wasn’t the bogey on 10 or the bogey on 11 that did him in. Those are very difficult holes and Spieth still led by two standing on the 12th tee. Up ahead, Danny Willett was putting together a wonderful round, all of which was likely to give him a chance to finish second.

But then, Spieth did something he almost never does: He made a mental mistake. And he made it at the worst time in the worst possible place.

“There are about six places at Augusta where you have to know exactly what you’re doing before the tournament begins,” Tom Watson said. “Jack (Nicklaus) explained that to me years ago. One of those places is the 12th tee.”

Standing on the 12th tee, Spieth thought he could cut a 9-iron into the flag. Later, Spieth said as he stood over the ball he remembered trying the same shot in 2014-when he trailed Bubba Watson by two shots – and finding the water. A moment later, his shot hit the bank in front of the green and rolled back into the water. Clearly stunned, he then chunked his third shot into the water and finally walked off with a quadruple bogey-7.

A moment later, having birdied the 15th to close – he thought – to within one of Spieth, Willett heard a gasp as he walked off the green.

“I turned around and saw they’d slid a ‘1,’ for Jordan under the 12th hole,” Willett said later. “At first I thought it was a mistake. Then I realized it wasn’t and knew I was leading the Masters.”

He was leading by one at that moment, over Lee Westwood, his good friend, who was paired with him. Often, the most difficult thing for an athlete to do is stay in the present when it hits him that he has a chance to do something special. Westwood, the veteran, reacted to suddenly being close to his first major victory by bogeying the 16th hole. Willett birdied it.

That’s what a champion does and, even though Spieth’s mental meltdown on the 12th tee was the focal point of most stories, Willett’s bogey-free 67 deserves to be remembered for a long time.

So does the way Dustin Johnson handled USGA officials tripping all over themselves during the last round at Oakmont. First, he wasn’t penalized when his ball moved on the fifth green. Then, he was maybe penalized, left – along with the rest of the field – literally not knowing the score for the last six holes.

Johnson shrugged it all off, did his best, ‘whatever-dude,’ down the stretch, including his virtual tap-in birdie at the 18th – one of the toughest finishing holes in championship golf. In doing so, he not only won his first major, he turned what could have been one of golf’s all-time debacles into just another footnote USGA embarrassment.

One month later, Henrik Stenson and Mickelson spent four remarkable days at Troon putting on the best golf show of the year. Mickelson came within an inch of the first 62 in major history on Thursday. Then, Stenson chased him down, eventually passed him and shot 63 on Sunday (!) to win his first major title. Mickelson shot a superb 65 that day – a round for the ages on almost any other major Sunday – and lost ground.

Two weeks later – the schedule was compressed because of the Olympics – Jimmy Walker went wire-to-wire at rain-soaked Baltusrol. This was the same Walker who had comfortably missed the cut at both Opens and was having a decidedly mediocre year going into the final week in July. Walker jumped from 29th to fourth on the Ryder Cup points list with his win, a move that made Davis Love III smile because he’d wanted Walker to play his way onto the team.

Then came the Olympics. Twenty-one eligible players chose not to go for reasons ranging from the Zika virus to the tight schedule to just wanting a break. Spieth, Johnson, McIlroy and Day were among those who passed.

Fortunately, Stenson and Justin Rose showed up and they put on a wonderful show on Sunday, Rose beating his Ryder Cup partner for the gold medal. Their duel may have saved golf in the Olympics since there was talk that the International Olympic Committee might vote in 2017 not to continue the sport beyond Tokyo in 2020 if it failed in Rio. Now, it seems likely, golf will survive.

And then, there was the Ryder Cup. Europe’s motto was, ‘shoulder-to-shoulder.’ The America’s should have been, ‘if not now, when?’

The U.S. had the specter of the famous/infamous task force (the Europeans giggled every time they used the term); they had home field advantage – a golf course set up to Love’s specifications and a wild, occasionally over the top, group of fans. Europe had six rookies playing on the road and also had two veterans – Martin Kaymer and Lee Westwood – searching for their games.

The U.S. played brilliantly, taking a 4-0 lead the first morning and never looked back – in spite of some nervous moments Saturday afternoon before Reed holed out a wedge for an eagle on the sixth hole, turning the momentum back around. Reed was the star – beating McIlroy in a scintillating singles match on Sunday – but every American contributed at least a point in the 17-11 win.

“I went back and watched the tape of Sunday,” McIlroy said, weeks later. “I couldn’t believe how many putts they made. They looked like us in past years.”

There was one other story, one that didn’t draw as much attention as the others but was the feel-good story of the year. In 2015, Billy Hurley used his pre-tournament news conference at the Quicken Loans National to publicly plead with his missing father to please contact his family. Willard Hurley was found three days later, but two weeks after that committed suicide.

Eleven months later, Hurley, who spent five years in the Navy after graduating from the Naval Academy, received a sponsor’s exemption into the same tournament – and won. It may not have been golf’s most dramatic moment of 2016, but it was certainly the sweetest.