Cook relives the past, happy with the present 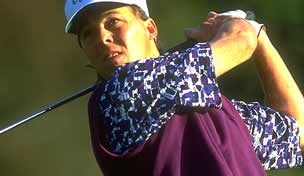 Getty Images
CHASKA, MN - AUGUST 15: Tiger Woods watches his tee shot on the 13th hole during the third round of the 91st PGA Championship at Hazeltine National Golf Club on August 15, 2009 in Chaska, Minnesota. (Photo by Jamie Squire/Getty Images)  -

Jeff Cook is 50 now and life couldn’t be much better. He and his wife, Pam, are in the process of building a house in Indianapolis and he is about to start his 16th year working as an equipment representative for Mizuno. That means he spends time on the PGA Tour almost every week, seeing old friends, spending time on the range trading jokes and old stories or arguing about his beloved Indiana Hoosiers with anyone who cares to take him on.

“Most of the time I’m perfectly happy to be on this side of things,” he said on a recent morning. “I like doing what I do and I enjoy myself out there working with the guys I work with. But there are times when I feel the twinges, when I miss the competition. That was the most fun about playing golf – the competition.”

Cook competed on the PGA Tour for one year, in 1993. Before and after he was a regular at PGA Tour Q-School finals. He played in the finals for six consecutive years and then twice more – the last time in 1999 – when he was already working for Mizuno. That may be why he’s perfectly happy that his late-season schedule this year didn’t call for him to be in California for the final finals.

“It doesn’t matter if you’re playing or not playing, the feel of Q-School is entirely different than any other tournament,” he said. “No one wants to stand around on the range and tell stories. There’s too much tension. I usually just wish guys luck and, if it’s one of our (Mizuno) guys I tell them I’m here if they need me for anything. I remember when I was playing at Q-School, it just wasn’t a week for socializing – even with my friends.”

Like every player who has ever teed it up at Q-School, Cook has a couple of indelible memories – one good and one bad.

“In ’92, the finals were at The Woodlands (outside Houston). It was cold and damp the whole week and at times it was tough to grip the club and really take a swing at the ball because you knew the contact was going to hurt.

“The last day, I came to 18 and I thought I was right on the number. That was what my gut told me. No one wants to play that hole under pressure – it’s long and the second shot’s over water and if you’re shaking with nerves, it’s brutal. I think I had 3-iron to the green and I hit it perfectly. Give me 50 tries and I won’t hit the ball better. I took my two-putt par and ran off the green.

“Making it through to make the Tour was thrilling, but doing it by hitting a shot that good under pressure made it even better.”

A year later, like a lot of Tour rookies, Cook was back – first playing second stage. “Second stage that year may have been as good as my game has ever been,” he remembered. “I mean I was on. I think I won by six shots (at Fort Ord) and I was ready to go play finals the next day.

“Problem was, they weren’t the next day; they were two weeks later. By the time I got there (at PGA West) I just wasn’t as sharp. I honestly don’t think I ever had my best game going during a finals – even the year I made it. That was frustrating but you can’t control that sort of thing.”

Even though he didn’t feel great about his game that week 19 years ago, Cook again went into the final day right around the number to make the PGA Tour. He was convinced he was smack on the number when he got to the 17th hole, which was a par-3 with water on three sides.

When Cook and his group arrived on the tee there were two groups ahead of them and a third walking towards the green. “That’s the toughest thing about Q-school, the pace of play,” he said. “The days are short because it’s December and the rounds are long. You feel like you’re playing almost from sunup to sundown.”

Cook took one look at all the players on the tee and went for a walk. “In that situation you don’t want to watch other guys,” he said. “It’s just too tough. If you see someone melt down it can affect you.”

Actually one player waiting on the tee did melt down, but not with a club in his hands. Steve LaMontagne, who, like Cook had been on Tour and was on the bubble trying to get back, lost it.

When someone on the green turned and yelled, ‘Hey!’ LaMontagne lowered his voice but kept railing while he paced in a circle.

Cook was sitting under a tree at that point, trying not to hear or see anything. When it was finally his turn, he hit a perfect-looking 6-iron that flew right over the flag and stopped 20 feet above the hole. It was right on top of a plateau, meaning if it sucked back just a little it might roll all the way down to the flag. It never moved. Cook was left with a 20-footer, straight downhill. He tapped it and watched it go 4 feet past the hole. His par putt did an absolute 360 around the hole – and stayed out.

“I remember going and standing by the board, watching the scores go up,” he said. “I was totally deflated after all the adrenaline I’d had going. I knew someone had to really screw up coming in from the last groups for the number to move. No one ever says it, but that’s what you’re standing there hoping for.”

It didn’t happen. Cook missed by one. He played on what is now the Web.com Tour for the next six years – getting back to finals on several occasions but never coming that close to the PGA Tour again. In 1997, while he was still playing, Rick Nelson, the Mizuno rep on the PGA Tour, quit halfway through the year. Cook had been playing Mizuno irons since college and had become an unofficial go-between the company and players looking to play Mizuno on what was then the Nike Tour.

Harry Taylor, who had been Nelson’s boss, called and asked if Cook would fill in as the company’s rep on the tour for the rest of the year.

“At first I said no, I was still playing,” Cook said. “But he said I could go in on Mondays, leave on Wednesday and they’d fly me to wherever I was playing. I tried it and liked it and actually played pretty well. By ’99, though, I was getting worn out. I had to make a decision.”

He played Q-School one more time, made finals but not the PGA Tour and decided, at the age of 37, it was time to move on. Thirteen years later, he’s married and has twin teenagers from Pam’s first marriage. And couldn’t be happier.

“I turned 50 this year and a lot of people said, ‘Are you going to try the Champions Tour?’” he said. “I thought about it, but then I realized I’d have to give up my job and the life I’ve built to try to do it. I do think back to that day in ’93 on occasion but not often.” He laughed. “One thing about Q-School, it’s not that often things happen that you try to remember. But you do remember, whether you want to or not.”