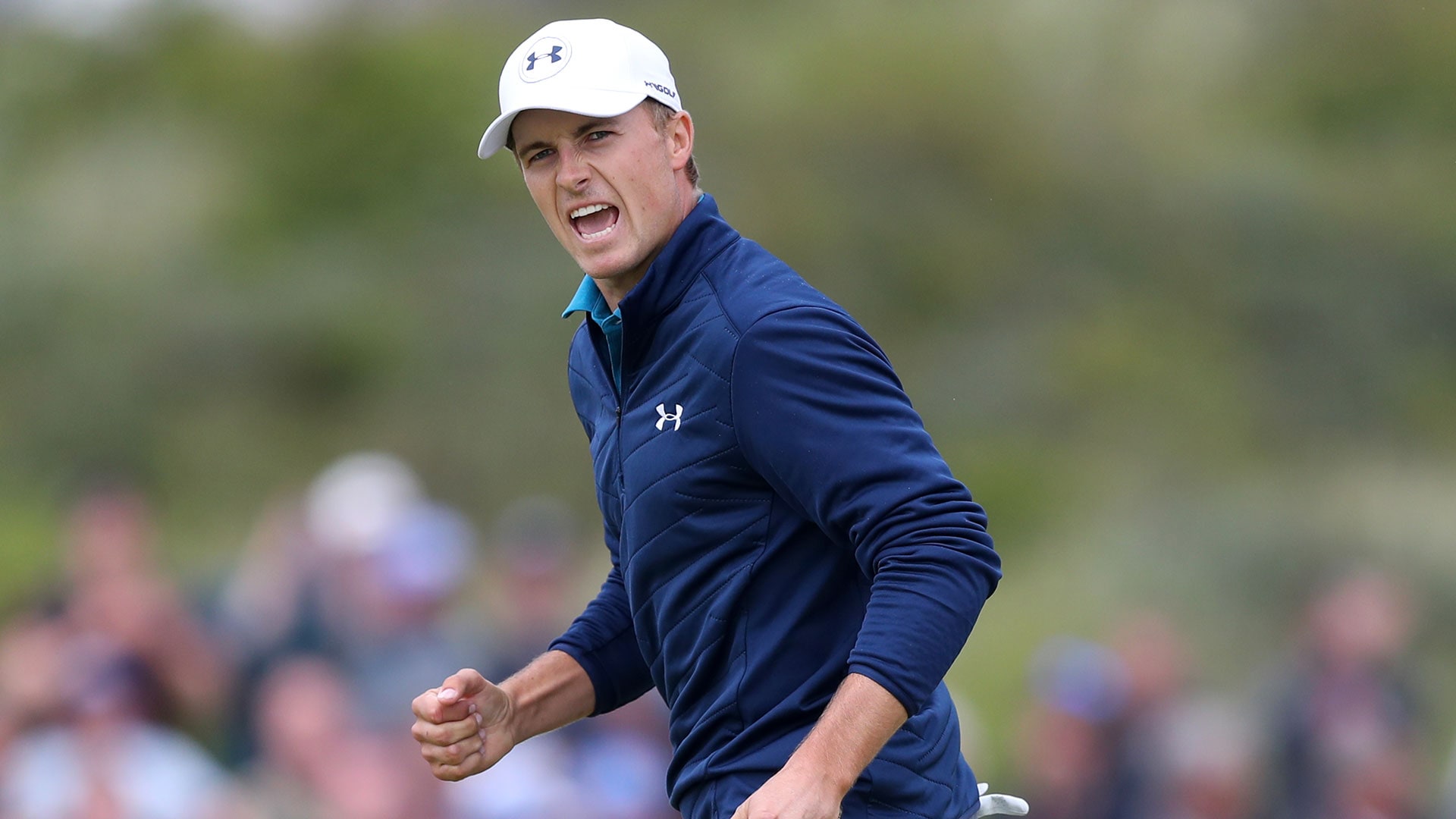 Finding words to describe Jordan Spieth’s Sunday performance at The Open is difficult. So, let’s begin by agreeing on one thing: The Open always delivers.

Since Louis Oosthuizen’s stunning runaway at St. Andrews in 2010, every Open Sunday has produced something remarkable.

It began with Darren Clarke’s emotional victory at Royal St. George’s in 2011. In his 20th Open – at age 42 – Clarke held off Phil Mickelson and Dustin Johnson for an emotional triumph and choked up during the victory ceremony talking about his wife, Heather, who had died of cancer five years earlier.

A year later, Ernie Els, also 42, played a brilliant back nine at Royal Lytham and St. Anne’s – the same course where he thought he was going to win in 1996 – and walked away with the claret jug when Adam Scott imploded over the last four holes.

Then came 43-year-old Phil Mickelson’s closing 66 at Muirfield, giving him a victory he honestly didn’t think he’d ever achieve. Rory McIlroy ended the 40-something’s dynasty a year after that at Royal Liverpool with a bravura performance that ended with an emotional hug with his mom on the 18th green.

At St. Andrews in 2015, weather pushed the finish to Monday and, after a wild scramble down the stretch, Zach Johnson, Oosthuizen and Marc Leishman played off – with Spieth, eyeing the single-season Grand Slam, one shot and about three inches from joining them. Johnson putted like a demon to walk away with the victory.

And the last two years have given us breathtaking mano-a-mano duels on Sunday: Henrik Stenson and Mickelson last year; Spieth and Matt Kuchar this year. Mickelson shot 65 on Sunday at Troon and went from a one-shot deficit at the start of the day to a three-shot defeat, after Stenson threw a 63 at him to win his first major.

Kuchar couldn’t help but note Sunday that, after taking a one-shot lead walking to the 14th tee, he played the next four holes in 2 under par. Which meant he only dropped THREE shots to Spieth during that stretch.

Which brings us to trying to find words to describe what Spieth did in the last 90 minutes of The Open – 30 of which were spent on the 13th hole.

Let’s start with two phrases that will be repeated for years-to-come:

There’s the ‘car-park shot,’ dating to Seve Ballesteros’ recovery at the 16th hole at Lytham on Sunday in 1979, leading to his first major title. And now, there’s the driving-range shot.

Everyone knows what happened: Spieth, fighting his swing and his emotions, hit about as bad a shot as a professional can hit on the 13th tee, described by NBC’s Roger Maltbie as being, “100 yards right.”

It took more than 20 minutes for Spieth to hit another shot – his third after taking an unplayable lie from the dune where the ball ended up. Because golf’s rules and those who enforce them have been under fire for a couple of years now and because Spieth has a (deserved) reputation as a slow player, there was a good deal of grumbling about how long it took him to play his third shot.

It would be a shame if people focused on that rather than Spieth’s final 19 shots of the championship, beginning with the one he finally struck from the driving range.

But, let’s review the circumstances for a moment. Spieth first had to choose from his three options after declaring the ball unplayable: go back to the tee; try to drop within two club lengths of the spot where his ball had finished; go back as far as he wished as long as he kept the dune where his ball had been, between him and the hole.

The first option – especially having to stand up on that tee again – almost certainly would have led to a 6, at least – and probably would have finished Spieth. The second was impossible, no place to drop.

So, it had to be option No. 3. The question was where could Spieth and his wandering golf ball go? The answer, as it turned out, was the nearby driving range – which (like the car-park) probably wasn’t out-of-bounds because nobody thought anyone would hit a shot anywhere close to there.

Spieth then took a lot of time checking yardage – there was nothing in his yardage book about playing a shot from there – talking to caddie Michael Greller and figuring out where he needed to aim his shot. Meanwhile, Kuchar sat and waited.

What made the situation impossible was there’s nothing in the rules – believe it or not – that covers this. It was unique. All the officials and all the king’s men couldn’t force Jordan to hit again.

On Sunday though, no such rule was in play. So, everyone waited.

The good news was that you can’t say that Kuchar was affected by the delay. Imagine if Rory Sabbatini had been playing with Spieth. Come to think of it, don’t imagine it. The visual’s too gruesome.

Spieth, as everyone knows, made bogey when all the dust and clouds and dunes cleared. The 8-foot putt that he made might have been the most important of the 268 shots he played at Royal Birkdale last week.

Clearly, it gave him a jolt. He went from looking baffled and bewildered by the round he was playing to steely-eyed, the way the true greats get when something clicks. Bruce Edwards always said he got a chill when Tom Watson turned to him on the driving range and said, “I’ve got it,” when he figured out a swing-thought he knew would work.

Spieth had it by the time he walked to the 14th tee. He almost holed his tee shot, settling for a 6-foot birdie putt. Then came the ludicrous eagle putt that travelled through several English counties (or 38 feet) at 15. That’s when his victim, Kuchar, no doubt began to get that sinking feeling.

Then came the birdies at 16 and 17. By then, Kuchar, who had played well all day and all week – no one in the field ended up within two shots of him – had to feel like Joe Frazier at the end of the Thrilla in Manila: He’d thrown everything he had at Muhammad Ali, as played by Spieth, and it hadn’t been enough.

So, back to the words that describe those last 90 minutes? You pick one: extraordinary, amazing, stunning, fantastic, supernatural, ridiculous, remarkable, indescribable.

They all fit. But one other stands out: historic. Those two phrases will remain part of the golf pantheon forever: the driving-range shot and birdie-eagle-birdie-birdie.

John Feinstein's new book 'The First Major: The Inside Story of the 2016 Ryder Cup' will be released October 24. It is available now for pre-sale online.