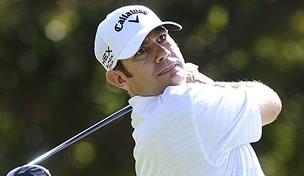 If Stephen Gangluff has learned anything after a lifetime of playing golf it is that trying as hard as you can to play the game well is mostly a waste of time.

He can remember telling himself he had to give everything he had no matter how bad things looked back at PGA Tour Qualifying Tournament seven years ago and failing utterly. He can also remember going to Q-School finals a year ago and just, “giving up.” The result was a second-place finish that put him back on Tour for the first time since 2002.

As much as anyone who has teed it up at Q-School since it first began in 1964, Gangluff symbolizes the highs and the lows of the event. In 2001, at age 26, he made it through all three stages to get his PGA Tour card. Four years later he was back at first stage, having wandered through the golfing wilderness after losing his playing privileges. In 2002 he was a full-fledged Tour player. A year later he was on what is now the Web.com Tour. By 2004, he was working in the pro shop jockeying carts at a club in Ponte Vedra in return for playing and range privileges. It was a fall from golfing grace that was difficult for him to comprehend.

“The biggest problem you have is coming to grips with where your game is,” he said late Tuesday after playing a practice round prior to the McGladrey Classic. “Every time something goes wrong your first instinct is to think, ‘why do I have to do this? Why am I here? I was a player on the PGA Tour – I can’t possibly be back at first stage. This just isn’t right.’ But it is right. The game’s never unfair to you. The game is the game – it’s you against yourself and if you go out there and beat yourself then you’re going to lose every time.”

In 2005, Gangluff found himself playing a Q-School first stage at TPC Tampa Bay, a golf course that hosts a Champions Tour event every year and is generally considered more difficult than most first stage sites. He was in the hunt to be one of the 19 players who would advance to the second stage when the wheels came off in the third round. Fairways were missed; putts rimmed out. All the bad thoughts he had been fighting to avoid flooded through his mind. Each bad swing brought another bad thought. The golf demons, as he calls them, came back.

By the time he finished he had shot 75 and had fallen out of contention. As if that wasn’t enough, Hurricane Wilma was bearing down on Florida that week, just six weeks after the devastation of Katrina. Many players who were out of contention withdrew after the third round, wanting to get home before the hurricane rolled in the next day.

Dillard Pruitt, who was running the qualifer for the Tour, decided to try to beat the hurricane by sending everyone out to begin the final round an hour after they completed the third round. “That way maybe we can get everyone finished and out of here by noon tomorrow,” he explained. “I’d rather be safe than sorry.”

Most players – those who hadn’t withdrawn – went to the range or the putting green during their break. Gangluff sat in the lobby of the clubhouse, alone with his thoughts, wanting to get as far away from golf as he possibly could, but never once thinking about escaping.

“You sign up for 72 holes, you play 72 holes, that’s the way I was always taught,” he said. “The thought of quitting never crossed my mind. Actually, I remember sitting in that chair and thinking to myself, ‘well, you missed, what do you do next? Where do you go from here?’ Then I looked at the board and thought, ‘well if you shoot 59, you can still make it.’ At least that made me smile. I decided the thing for me to do next was to go out and try as hard as I possibly could to shoot 59. I knew I almost certainly wasn’t going to do it but I figured if I did do it what a story that would be.”

Gangluff shot 67, grinding until the last putt was in the hole. It gave him something to grasp as he drove away that morning to go home and deal with the hurricane.

“It was a mixed blessing to have been on the Tour at that point,” he said. “On the one hand I had to fight all those demons telling me how unfair it was for me to be playing at the first stage. But I also knew – KNEW – I was good enough, that the game was inside me somewhere if I could just find it. That’s what kept me going forward.”

With no status on any PGA Tour level in 2006, Gangluff went back to playing the Canadian Tour. He qualified for the U.S. Open at Winged Foot that year and made the cut – finishing tied for 40th. “That was a real confidence boost,” he said.

He made it back to what was then the Nationwide Tour a year later and again played that tour in 2011. After what he called a “horrible year” in 2011 he decided to give Q-School one more shot.

“By then a buddy of mine who works at Farmington Country Club (outside Charlottesville, Va.) had hired me to work in the pro shop and I loved the place,” he said. “He told me to go try Q-School, play as hard as I could and if it didn’t work out, my job with him would be waiting for me.

“I think that relaxed me. No wondering, ‘what do I do if this doesn’t work.’ By the time I got to finals it was almost as if I wasn’t trying. I never touched a club the week before I went to Palm Desert. I hit exactly one post round-practice shot the whole week – I hit a bad tee shot at 18 one day, walked to the range, hit one ball dead straight to make sure I still had it and went home. I finally figured out how to stop trying. And it worked.”

Six years after he couldn’t come close to getting out of first stage, Gangluff finished second at Q-School finals. He was back on Tour, 10 years after he had first been there.

“The problem’s been I haven’t been able to keep not trying,” he said, laughing. “You get out here you see how hard guys are working and you figure, ‘I need to do that, too.’ You get tight when you have a chance to do something and then you start guiding the ball and that’s no good. If I had this year to do over again, I might never go to the range.”

The year has been a struggle. Gangluff has been going through a divorce. He refuses to use that as an excuse and says he thinks about it more at night after he’s played than when he’s playing. “A bad day at the golf course and you sit around and think about it a lot at night,” he said. “But that’s not why I haven’t played better.”

Gangluff will tee it up at McGladrey having made six cuts in 21 starts with his best finish coming last week at Frys.com where he tied for 64th place. He shot 70-67 the first two days, 74-74 on the weekend.

If Gangluff finds lightning in a bottle this week or at Disney and vaults into the top 125 on the money list (he’s 218th right now) he’ll know he’s figured out a way to not try. If that doesn’t happen, it’s back to Q-School – one more time.

“The good news is I know I can do it – still,” he said. “I just have to figure out how to bottle what I had last year. Of course if I could do that, I’d never have to play Q-School again.”

If only golf were that simple. 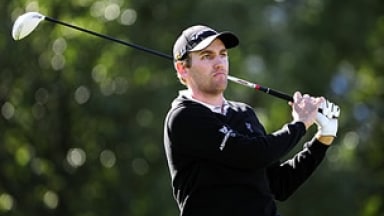 Brendon Todd shot a final-round 4-under 68 on the Jack Nicklaus Stadium Course to win the PGA Tour Qualifying Tournament by one stroke on Monday, earning his Tour card for 2012.